An epic rainstorm in New York last week wreaked havoc on the roads. With flooding of major highways and sinkholes on main thoroughfares, getting from New York City to Westchester was a test of patience. 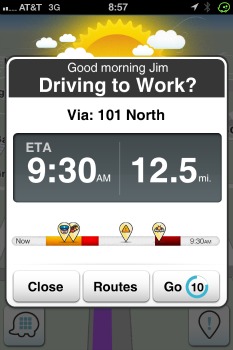 Our cab driver had two GPS navigation systems running in his car: Google Maps and Waze.

Google Maps, he noted, was better for maps. Waze, he contended, couldn’t be beat for its real-time traffic information.

Though our driver couldn’t have known that an enormous acquisition by the giant search engine of the tiny crowd-sourced navigation application was about to take place, his usage of the two systems illustrated the main reason why Google bought Waze.

Google is a leader in online mapping and its new acquisition will fortify its expertise. By integrating Waze into its system, Google Maps will be able to “outsmart traffic” across the globe.

“The Waze community and its dedicated team have created a great source of timely road corrections and updates. We welcome them to Google and look forward to working with them in our ongoing effort to make a comprehensive, accurate and useful map of the world,” Brian McClendon, Google’s VP of Geo, wrote in a blog post announcing the deal.

Waze is a community-based traffic and navigation app based on user-generated data from the GPS on smartphones. Users post messages on road conditions, and the application offers alternate routes based on that information. Users earn points and titles based on the number of miles logged, and Wazers talk of a sense of camaraderie when tackling a traffic jam together.

It was a computer science-philosophy major from Tel Aviv University who changed the way we drive. Ehud Shabtai, co-founder and CTO of Waze, says he was terrible at finding his way to new places. After being given a GPS system, he came up with “big ideas on how to improve the thing.”

Waze was founded in 2007. Its main office is in Ra’anana with a smaller office in Palo Alto.

Reports of a buyout surfaced shortly after it was named the Best Mobile App for 2013 at the 18th Annual Global Mobile awards. First Apple was linked to an acquisition deal, and then rumors swirled that Facebook wanted to buy the app. In the end, it was Google that dished out $1.03 billion to snap up the red-hot mobile app — and spite its competition on the way.

The deal was a source of pride for every Israeli. Reportedly, nine out of 10 Israeli drivers use the application. Israeli Wazers feel like they played a role in the company’s success – even if they won’t see a cent of profits.

The US is its largest single market, with over 12 million Wazers. But there is still a lot of growth in that market – and Waze needed Google just as Google needs Waze to fulfill bumper-to-bumper goals there.

Big-city users might see dozens of other avatars on the Waze network but there are still huge chunks of the American driving market unaware of this navigation tool.

The new Google-Waze merger, of course, will change that.