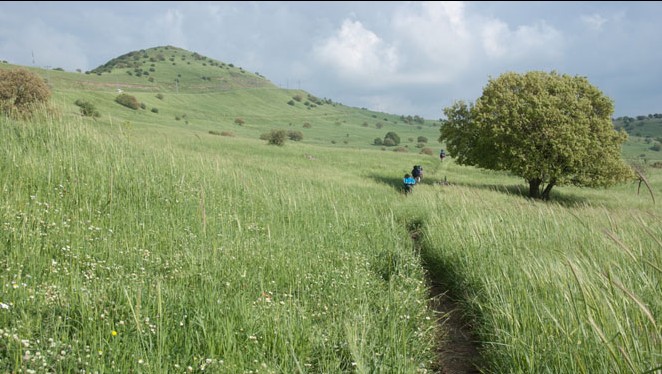 A trail cuts through the Golan Heights in northern Israel. (Asaf Eliason/Shutterstock.com)

The Israel National Trail – stretching 1,000 km – has been included in the list of “holy grails of trails across the world” by National Geographic magazine.

“A truly great trail winds into the essence of a place,” writes Doug Schnitzspahn, author of the best hikes list. “We looked for walks that travel deeper into a location’s history and culture. Sure, there’s outdoor adventure on each of these 20 hikes, but the trails also tell a rich story.”

Breathtaking desert views. (Shutterstock.com)
Any hiker who has been to Israel will tell you that the country is a hiker’s paradise. In addition to the Israel Trail, countless other paths crisscross Israel from the Golan Heights down to Eilat.

The Israel Trail is best in early spring before it gets too hot.

The Society for the Protection of Nature in Israel says tens of thousands of people hike the Israel Trail every year, saying the average hiker completes it in 30-45 days.

Hikers can choose to sleep near civilization or out in the wilderness.

“Passing through vast empty desert and winding into kibbutzim, the Israel National Trail delves into the grand scale of biblical landscapes as well as the everyday lives of modern Israelis (with opportunities to stop in the cities of Tel Aviv and Jerusalem). But beyond the immense sense of history and breaking news, the trail powerfully connects to something that often gets lost in all the headlines—the sublime beauty of the wilderness of the Middle East,” writes Schnitzspahn in the magazine. 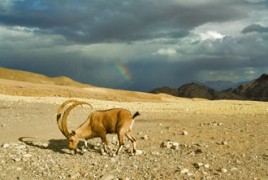 Nubian ibex. (Shutterstock.com)
“The southern end of the trail crosses the harsh and lovely Negev, still populated by wandering Bedouins and long-horned Nubian ibex and filled with wildflowers in spring,” he summarizes. “It dips into the 600-foot-below-sea-level waves of the Sea of Galilee, flanks the baptismal River Jordan, and runs along Mediterranean beaches north of Tel Aviv. The southern terminus ends in the resort town of Eilat on the Red Sea.”