Mysterious structure was first detected in a sonar survey of the Sea of Galilee. (Shmuel Marco) 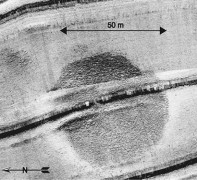 Researchers in Israel are trying to ascertain who made the “unhewn basalt cobbles and boulders” and what the 54,400 ton pile of rocks was used for, they write in the International Journal of Nautical Archaeology.

In the journal article, the researchers suggest the mysterious structure is a giant man-made cairn that may have been used to mark a burial site.

“The shape and composition of the submerged structure does not resemble any natural feature. We therefore conclude that it is a man-made and might be termed a cairn,” researchers wrote.

The rock pile is 10 meters high and 70 meters in diameter. The mound was first seen during a sonar scan of the Sea of Galilee in 2003.

Ben-Gurion University’s Israel Antiquity Authority Yitzhak Paz, who is one of the researchers, told LiveScience that the structure could be 4000 years old. “The more logical possibility is that it belongs to the third millennium B.C., because there are other megalithic phenomena [from that time] that are found close by,” Paz said.

Paz also told LiveScience that a new expedition to examine the site is now in planning stages and will focus on finding artifacts and organic material to accurately date the site.

UNCOVER ISRAEL - Get the ISRAEL21c
Weekly Edition free by email
Sign Up Now!
Bring Israel's story to life.
Millions of people around the world rely on us to gain a deeper understanding of Israel. We are the trusted source for original content you won't find anywhere else.
You can make a difference. Donate today to support journalism that brings Israel’s story alive.
SUPPORT ISRAEL21c
Read more on:   News, Israel, Stonehenge, Archaeology