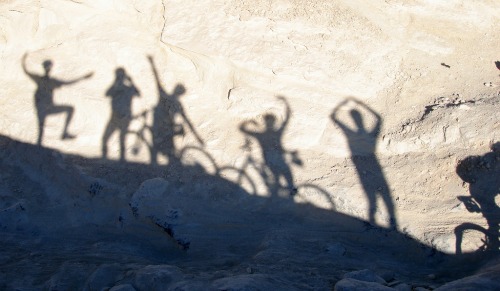 Photo by Raphael Rabinovitz.
Strengthening their minds and their bodies – children from Ride with Hope.

Every Tuesday, rain or shine, Prof. Shimon Schocken goes mountain-biking through Israel with a group of 10 juvenile offenders.

Almost five years ago, he posed the idea to the warden of a detention facility he often passed on his weekly jaunts.

“He thought I was a nut,” the renowned academician recalled in a talk about his Rides of Hope project at TEDxTelAviv 2010 last April. “Yet … he somehow made it happen two months later.”

With the weekly assistance of Raz Soreq, who teaches gardening at the facility – plus a few regular biking buddies interested in coming along – Schocken introduces participants “to a world of total freedom, magnificent vistas and small creatures of all shapes and colors.”

Schocken, son of an army general and an artist, has long relished this world from atop a two-wheeler. The 56-year-old chairman of the Computer Science Education Committee of the Israeli Ministry of Education steers smoothly between classroom and bike trail.

The pull toward his motherland’s terrain was so strong that it figured into his decision to leave a tenured position at New York University in 1996 to return with his psychotherapist wife and their three children, now 19, 22 and 27.

“Mountain biking in Israel is something that I do with great passion and commitment,” he says. “When I’m on my bike, I feel that I connect with the profound beauty of Israel and am united with this country’s history and biblical lore.” This is what he shares with his protégés.

Each Tuesday, Soreq rises before dawn to fetch a 4×4 trailer donated by Israeli real-estate development firm Tidhar through its CEO, Gil Geva. Soreq drives to the detention center, wakes the kids, loads the vehicle with food and gear before meeting Schocken and that week’s volunteers at the start point.

In the course of eight months or so, each teen has a rare opportunity to develop warm, healthy relationships with accomplished adults outside of the framework of the institution. 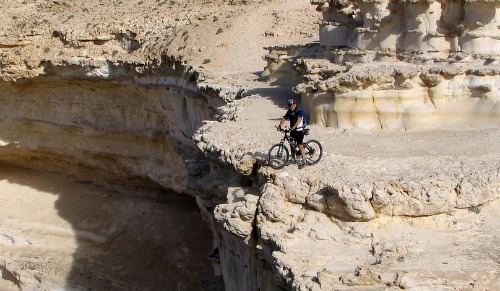 “They feel equal to us when they are on the bikes — sometimes even superior, if they are in better shape,” Schocken observed.

As his crew winds through kibbutzim, holy places, old Arab villages and desert hills, he narrates and stops to talk with interesting people along the way. “The kids acquire the understanding that life is complex, there is no black and white, and that makes them more tolerant,” said Schocken. “Tolerance leads to hope.”

Before one recent trip through a forest, Schocken asked each boy to imagine having an unlimited budget to formulate a fire-prevention program. Later, they presented their plans to the group. This kind of exercise strengthens their minds at the same time as their bodies.

“Above all,” Schocken told ISRAEL21c, “they get to do a challenging, strenuous activity that helps to relieve aggression and build their self-esteem. They learn that they can do incredible things if they want to.”

A different kind of student

Schocken, a former paratroop commander and an experienced educator with a doctorate from the Wharton School of the University of Pennsylvania, co-founded IDC, Israel’s first private, non-profit university, and its Efi Arazi School of Computer Science.

Currently a computer science professor at IDC, Schocken co-developed a new approach to teaching applied computer science that’s now used in many universities around the world. His work on this subject appeared in a bestselling book published by MIT Press.

Still, Rides of Hope exposed him to an entirely different cohort.

“At the beginning, every small obstacle would cause them to want to give up. I’m used to algorithms and data structures and super-motivated students — not raging, violent adolescents in the middle of the Judean desert refusing to go any further,” he related. “I realized they had a hard time dealing with frustration and it was aggravating.”

When harsh words and threats failed to work, Schocken discovered it is more effective to remain close by, offering a pat on the shoulder and a piece of chocolate until the frustrated youth calms down.

“They’re used to people abandoning them and giving up on them, so if an adult stays with them no matter what they do, it’s a tremendous healing experience.”

Nevertheless, some participants cannot handle it. “For the first three months, we test their mettle,” said Schocken. “Some get into disciplinary problems, some have fitness problems, or can’t wake up at 5 am, so we have to sort that all out. And some, unfortunately, can’t stick with us. But those that remain become highly motivated, die-hard riders.”

Schocken stays in touch with about half the former participants after they are released, helping them find jobs, get into the army and otherwise adapt to the real world. “Some continue to ride with us after we help them buy their own equipment,” he said.

Where originally Schocken had envisioned creating a team of winning underdogs, he softened his quest for perfection and discovered his capacity for empathy and flexibility.

Stressing teamwork, endurance and perspective as tools for conquering rough terrain in both biking and life, he has developed a different vision: “To expose the kids to love — love for the country, the uphill, the downhill, the animals and plants that surround us, and love for one another and themselves.”