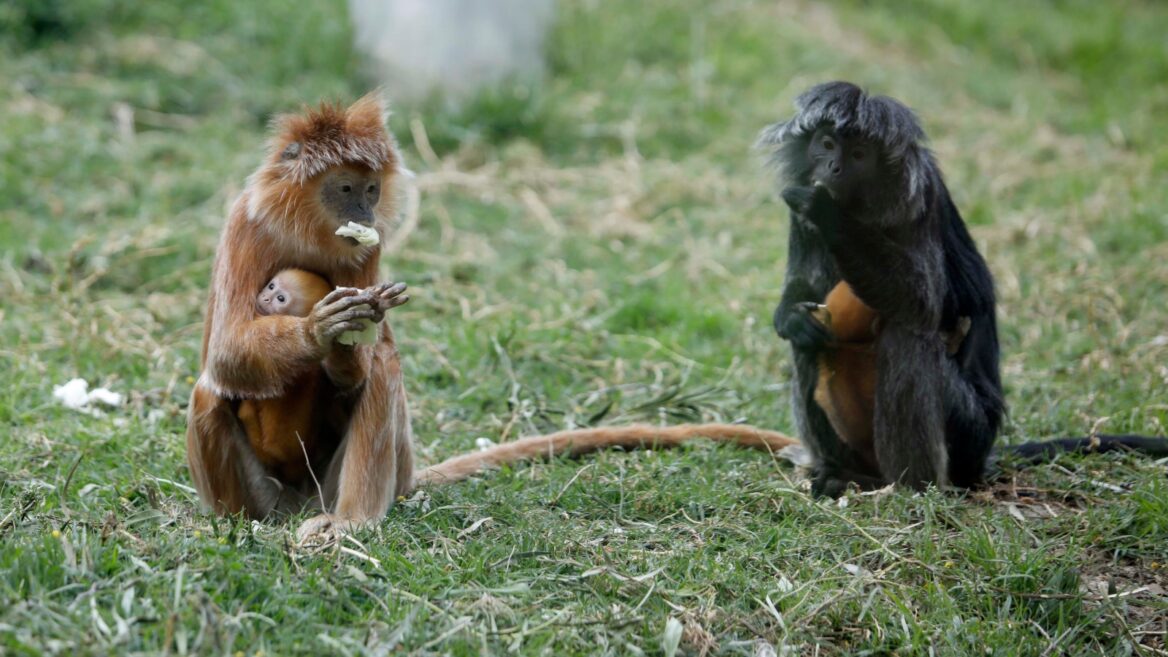 There was great excitement at the Tisch Family Zoological Gardens — Jerusalem Biblical Zoo – when its first golden Javan langur baby was born on March 20 in the Shapiro Family Orangutan Exhibit.

And then there was surprise when another of these leaf-eating tropical monkeys was born on April 7.

Keeper Benjamin Fainsod explains that he suspected black-coated Liz, already a mother of one, was pregnant. Therefore, when he saw an infant had arrived, he assumed it was hers.

But it turns out that Liz was still gestating her baby. The first newborn had been delivered by Saffron, a golden Javan langur who’d never given birth before and hadn’t shown signs of pregnancy.

The confusion was confounded by the fact that adult female Javan langurs typically help care for all the babies in their social group, whether or not they are mothers.

Therefore, baby #1 was often seen in the care of Liz even though he was born to Saffron. 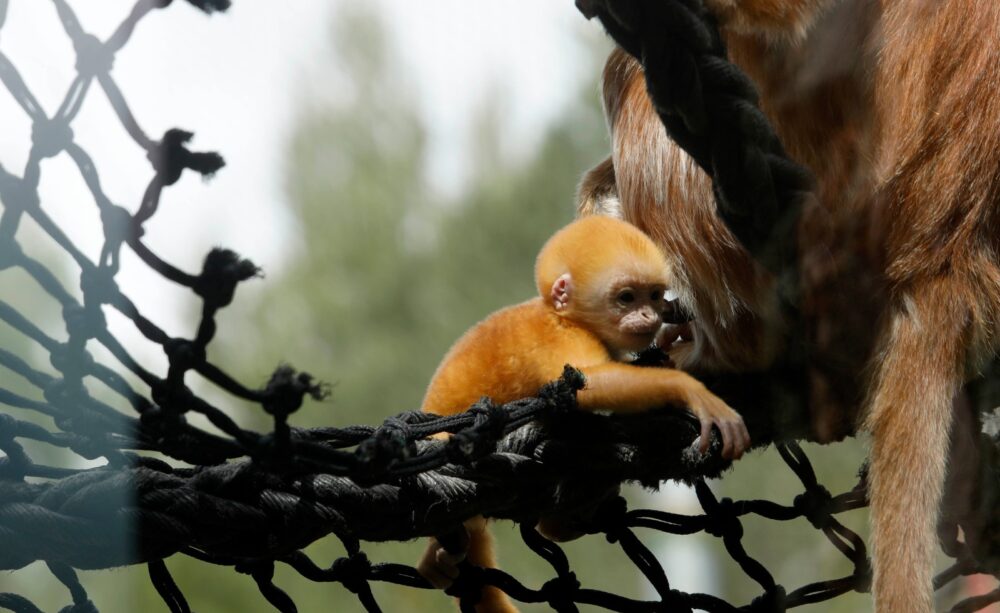 After the arrival of both babies, Saffron and Liz have continued sharing the mothering duties.

“Sometimes Liz has both of the babies on her,” Fainsod tells ISRAEL21c. “She is a more experienced mother. But they both take care of the babies.” 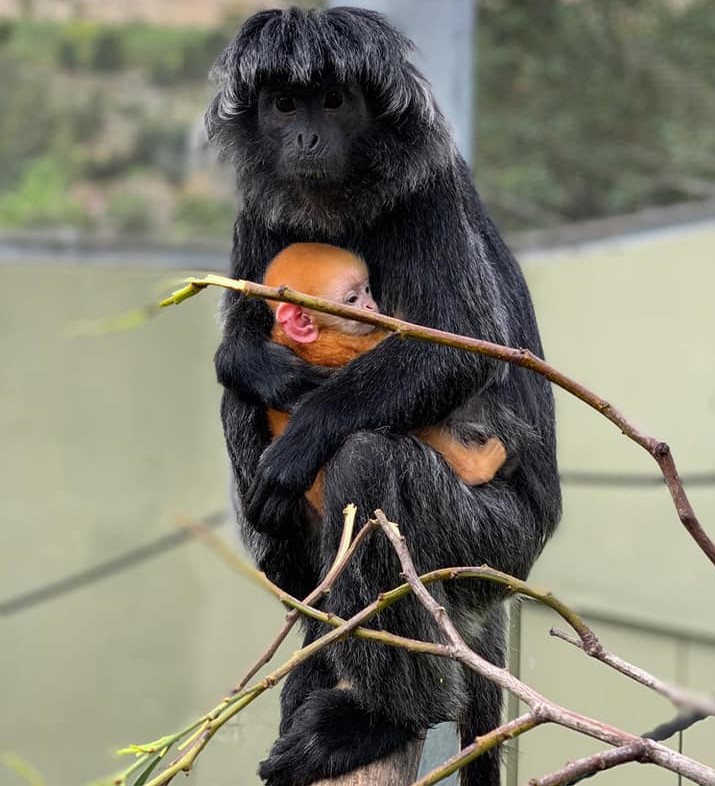 It’s not hard to tell the infants apart; Saffron’s baby is completely gold while Liz’s baby has streaks of black fur.

Fainsod explains that Javan langur infants usually are born with gingery fur that gets darker as they age. Most adult Javan langurs have glossy black coats with brown on the legs and belly, like Liz, but some individuals remain ginger-colored, like Saffron. 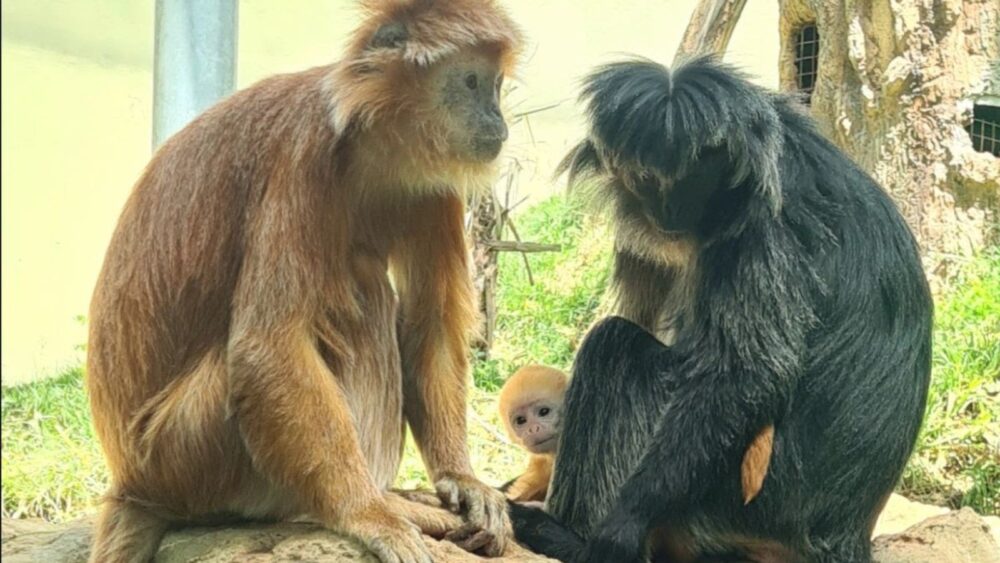 A newborn Javan langur peeking out from between his mother Saffron (left) and Liz (right), another member of the group who gave birth two weeks later. Photo by Avinoam Zisso

Female Javan langurs typically begin to breed around three to four years of age, and give birth once a year, one offspring at a time. The infants develop quickly and are often independent within their first year of life. Liz feeding her baby at the Jerusalem Biblical Zoo. Photo by Gil Cohen-Magen

The cute new additions, not yet named, were both sired by Orlando, the mature male in the group. Orlando, Liz and their now 3½-year-old son Night came to Jerusalem from the Moscow Zoo on October 31, 2019. They joined Saffron, who’d come the previous October from Holland.

Night was already slated to be moved to a different zoo, says Fainsod. That will happen sooner than planned because he was aggressive to the new babies and had to be separated from the group.

Fainsod, who also is the keeper for the zoo’s carnivores and orangutans, feeds the langurs leaves, vegetables and a bit of fruit as positive reinforcement.