The Israeli drip irrigation system has allowed 700 farming families in Senegal to reap crops three times a year instead of just once.

Most of the farmers in Senegal rely on rainwater to grow their maize. But rain-fed crops make for an unreliable harvest, especially in a changing climate. In addition, traditional seeds, pesticides and chemicals are causing damage to water and resources The solution? Israeli drip irrigation.

“We’ve developed a system which can bring a model or solution for sustainable development in the rural areas in south Saharan Africa, and in developing countries where there is no agriculture,” says Ilan Fluss, director of external affairs for the Israeli Foreign Ministry’s MASHAV Center for International Cooperation.

Since 2004, MASHAV has been working in Senegal to implement a system for irrigating low-value land developed at Ben-Gurion University of the Negev by Prof. Dov Pasternak, originally called the African Garden Market. It was presented at a United Nations summit in 2002 in Johannesburg. 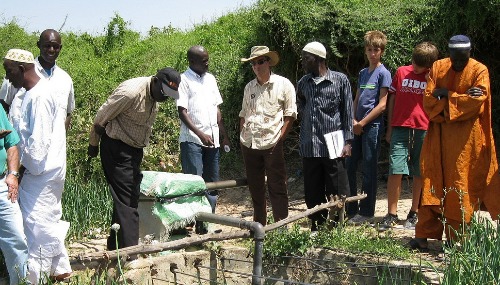 Farmers inspecting how the Tipa system will bring just right amount of water to the roots.

Israel has already shown how successfully it can farm in the heart of the Israeli desert, where early pioneers coaxed fruit and produce from the sand.

Bringing the same success to Senegal, where about 80 percent of the population farms for sustenance, requires only “a simple drip irrigation system that uses gravity when there is no water supply or water pressure coming to rural areas,” Fluss tells ISRAEL21c.

Standing about one yard off the ground, the Israeli drip irrigation system, called Tipa (“Drop”), includes a cement reservoir, a water pump (that can be operated by hand, solar power pump or diesel generator) and plastic irrigation pipes. Gravity sends the water right to the roots of the plants, minimizing evaporation, soil leaching and the need for high volumes of pesticides and fertilizers.

“We’ve given them a system that can use land that looks impossible to use,” says Fluss. “One can use this system on degraded land that is not very fertile.”

The Israeli system has allowed 700 farming families in the Senegalese regions of Ngoe, M’bassis, Daptior, Keur Yaba and Mbisau to reap crops three times a year instead of just once, and to experiment with higher-value crops to sell in local markets — providing a complete, sustainable source of income for small farms, a majority of which are maintained by women.

So successful has been this Israeli model, which is supported by low-interest loans from third-party NGOs in the region, that other farmers in the project areas have copied it.

Furthermore, the Israeli project will now be part of the country’s national strategy for development, Fluss reveals. Through a trilateral partnership including Israel, Italy and the Senegalese government, Tipa will be extended to some 500 hectares of land and will directly benefit 10,000 more people.

A fishing rod is better than a fish

Tipa is one of the pillars of the MASHAV program, says Fluss. The organization also has similar activities in Kenya, South Africa, Benin and Niger.

According to traditional Jewish charitable principles, giving people the means to earn their own income is the highest form of philanthropy. This is the basis of the MASHAV programs that have trained thousands of people from developing countries over the last five decades.

Sometimes, Israeli experts fly in to various countries to give seminars and tools. Other times, trainees come to Israel to stay on a kibbutz or work in a city hospital to learn from the experts on their turf.

Israel never had millions of dollars to give developing countries in the form of aid, but its early leaders recognized that capacity-building and training programs, based on know-how learned from building the new Jewish state, could impact people in need in a more meaningful way that just pouring money on a problem.

Conceived by past Prime Minister Golda Meir while on a tour of Africa, MASHAV is dedicated to giving people the means to fish for themselves, rather than handing out the metaphorical fish.

In Senegal, Tipa is low-cost to implement and easily replicated. But it could easily save millions of lives faced with food insecurity and the shifting winds of climate change — a fishing rod strung with life-sustaining twine.