Anybody can install a few playground swings adapted for children with physical disabilities. But that is not Israel’s vision of accessible play areas. Though they have only started taking off in the past six years, Israeli parks for children with special needs combine carefully planned physical layout with just as carefully planned companion programs geared to educating the community about acceptance and integration.

So remarkable is this formula that it has inspired the vice president of Ecuador, himself a paraplegic, to seek guidance from Israel in building 200 similar parks in his home country. Uruguay also is following Israel’s lead in this area.

“The physical and social part of the park go together strongly,” says occupational therapist Michele Shapiro, a specialist in sensory therapy at Beit Issie Shapiro (BIS), an organization providing services to children with special needs, promoting research and training and changing attitudes toward people with disabilities. 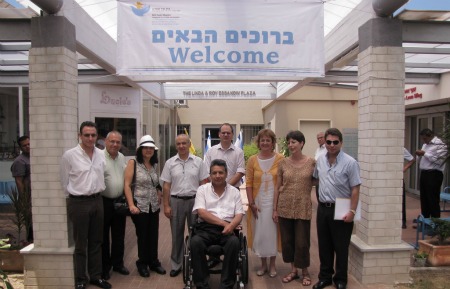 “The education, programming and community outreach are what make the park successful,” she tells ISRAEL21c. “Otherwise, it becomes a white elephant.”

Shapiro headed the design team responsible for Israel’s first accessible and inclusive playground, built on a nine-acre area within the large Ra’anana City Park with the help of the municipality, Jewish National Fund-UK and Keren Kayemeth LeIsrael. This location lets children with and without special needs enjoy the facilities together.

Park Chaverim (Friendship Park) includes paths, swings and carousels that can accommodate a wheelchair, as well as adaptations for children (or accompanying adults) with hearing and sight impairments. Educational activities and community events foster tolerance and inclusive attitudes for children age three to 17 and their families.

Volunteers and staff from BIS help facilitate everyday interactions — and also assure kids with disabilities get first priority on the equipment, which is popular with all children. 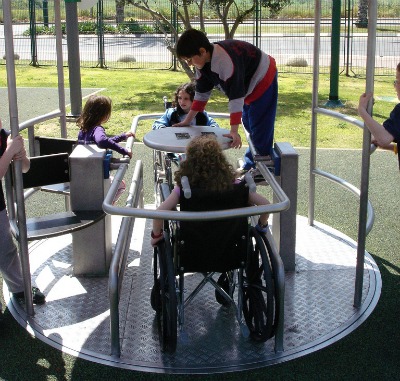 “Without any social intervention in the park and the schools, families of children with disabilities won’t enjoy the park as they should and you also won’t effect change,” BIS Project Director Ronen Cohen tells ISRAEL21c.

Parents of children with disabilities rarely frequent playgrounds, he says. “After their kids come home from special education classes, they’re going from one therapy or another, they’re very tired, they have other kids to raise, and above all they are concerned about the way the community looks at them. That’s why they asked us to be there and welcome them when they come to the park.”

Since Friendship Park opened in 2005, BIS has given hundreds of tours to municipal officials from across Israel, and consults on the construction of similar parks.

Yet the July 2011 visit of Ecuadorian Vice President Lenin Moreno Garces stands out in Cohen’s mind. Israeli President Shimon Peres and the Foreign Ministry coordinated the tour for the wheelchair-bound Garces, accompanied by his family and a VIP entourage.

“We got the feeling it was really touching for him,” says Cohen. “He took a lot of pictures and asked a lot of questions that politicians who come here usually don’t ask, and we explained all the details and the very clear vision behind the park as a place that provides inclusion.”

A few weeks later, Ecuadorian Ambassador to Israel Guillermo Bassante contacted BIS and said the vice president wants to build some 200 Friendship Parks, in each city in Ecuador.

“It’s pretty amazing just as a statement, and also it’s a very ambitious thing to do,” says Cohen. “I said we will be happy to give all the help we can. I recommended to begin with two or three parks as a pilot and to appoint a professional liaison for us to deal with.”

In addition, the Israeli embassy in Uruguay initiated contact last year between the South American country and BIS in order to build a Friendship Park there.

Families come from all over

Years of planning preceded the establishment of Friendship Park, which quickly became a model for Israel and beyond.

The concept began with BIS founder Naomi Stuchiner. Once she had raised the necessary money, she and community social workers organized “think tanks” of parents, adults with special needs and therapists. They sought advice from the National Insurance Institute, organizations working with people with various disabilities and parents all over the world.

“When we had our answers, we put up a park that would have equipment suitable for children with any disability and also for typical children plus parents or grandparents with motor problems,” Shapiro says.

“We organized it in segments as if you’re looking at a watch with a piece of equipment on each ‘number,’ each of a different color to help children with visual problems to define where they are going.” Audible water elements between certain areas help children with sight impairments to orient themselves.

For this first venture, they purchased tried and tested European equipment. Israeli companies are now making the specialized apparatus for the Friendship Parks that BIS has been helping to set up in several other Israeli cities since 2009 with assistance from the National Insurance Institute, Israeli Lottery and the Shalem Fund, among others. Building a park costs about $100,000, and the funders’ ideal is to include community programming.

“Not all of them have the social side yet, and those don’t do as well as ours,” says Shapiro. “Families come from all over to use our playground. There’s also a lake and petting zoo in the larger park, so all the kids in a family can enjoy it.”