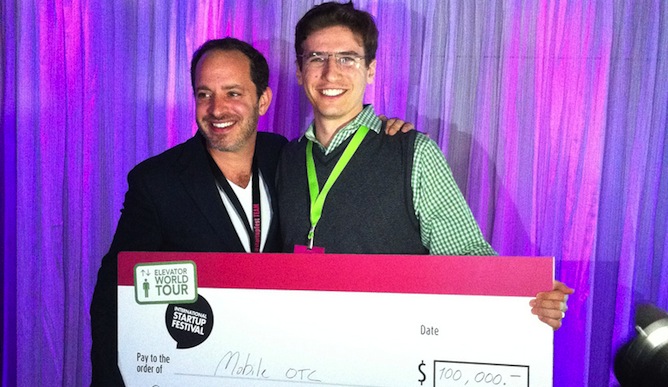 The pressure going up 49 floors in the elevator of one of Tel Aviv’s Azrieli Center towers wasn’t just felt in the ears: 100 contestants were sweating palpably as they delivered an actual elevator pitch to potential investors, hoping to be the next big startup from Israel.

The International Startup Festival, based in Canada, took its show on the road to Israel as part of its Elevator World Tour.

The grand prize — a $100,000 angel investment and a ticket to an international pitch event in Montreal next July – was awarded to Ariel Beery, cofounder of MobileOCT. The company proposes a smartphone add-on device to help doctors in developing countries diagnose cervical cancer early.

The inaugural Elevator World Tour took place in Canada’s CN Tower in Toronto. Tel Aviv was the second stop on the tour, on December 18, 2013. Future cities looking up as possibilities for 2014 include Rio de Janeiro, New York, Barcelona, Paris, Berlin, Dubai and Santiago.

The event not only seeks to uncover the most promising young startups from around the world. It also aims to identify the ecosystems and cities where startups are formed and the “secret sauce” of what makes the world’s next success.

The founders of new Israeli tech companies pre-chosen for the event lined up for an elevator ride where they would have 60 seconds to give their pitch in front of two high-tech angel investors. With the judges, camera operators and journalists aboard, there was barely room to move in the lift as hopefuls gave it their best shot.

The field was then narrowed to nine companies, whose CEOs vied for the prize with a three-minute pitch in front of a larger (and stationary) audience. Those who didn’t win still got valuable face time with the international investor community and the media.

Brushing up the pitch

Yonatan Dror from Oggii got to present his healthcare device for dogs to help diagnose if they are sick or in distress. He did not expect to win, but did make it to the finals.

Unlike many other young entrepreneurs from Israel, Dror doesn’t have experience going to weekly pitch nights and trying his luck in front of investors in a public setting.

He says: “It’s very interesting to see everybody here chasing the money. I want to test my pitch on the judges tonight. I learned that the traditional story of the problem and how you solve it doesn’t sell. Maybe I am going to have to go for a personal angle,” he tells ISRAEL21c moments before going up in the elevator.

Judge Chaim Meir Tessler, deal flow manager from OurCrowd, a crowd-sourcing platform for accredited investors, tells ISRAEL21c that he loved the idea of an elevator pitch turned into an event.

“Israel just has a lot of everything. There is a lot of the ‘me too’ with a twist, but a lot of ingenuity too,” says Tessler. “It surprises me when I meet people with very successful companies who go on to do something new which is completely different. I think people in Israel aren’t afraid to try things. You could have a person who has developed a genius thing equivalent to a product for the CIA and then create a photo app. That takes a lot of balls.”

In the end, the judges had to choose one company with “balls” and business potential, but the winner was actually addressing a problem for women.

“This award will allow us to accurately identify cervical cancer at early stages and save hundreds of thousands of women dying unnecessary deaths each year,” said Beery, a past leader of PresenTense, an NGO that helps emerging Jewish leaders create startups in Israel or in Diaspora Jewish communities. He founded MobileOCT with Dr. David Levitz.

“After having worked as hard as we have, it is incredibly gratifying to receive this recognition from some of the key players in the investment community,” said Beery.

“We have been extremely impressed by all of the startups that entered the competition, especially MobileOCT and those that were short listed,” said Phillipe Telio, founder and producer of the International Startup Festival.

Ron Huldai, mayor of Tel Aviv-Jaffa dropped by to send his regards before the winners were announced. He made his address short and sweet: “We are the startup city of the startup nation.”

For more about the Elevator World Tour, see www.startupfestival.com