Jasmine Feingold’s victory in the Israeli Rowing Championships’ 2,000-meter event last March was nothing short of miraculous. She was still recovering from a near-fatal freak training accident three years before.

“I was positive I’d go back, and I planned to do whatever it takes, but I didn’t expect to start winning again so quickly,” 23-year-old Feingold tells ISRAEL21c during an interview at the Tel-Aviv Rowing Club, her home away from home since she took up the sport at age 15. After taking Israel’s single sculls lightweight title, she worked with coaches in Israel and Denmark, and won her first international regatta in 2006 in Austria.

Now, eight months after the regaining her national standing, she just returned from her first endurance regatta, in .

“It was a big challenge in terms of rehabilitation,” she says. “Things went well, though there is still a lot of work to be done. It was also heartwarming because I was invited by the organizers and a major boat manufacturer as a token of comradeship to a fellow rower. The hospitality was warm and I felt very welcomed back into the rowing community.”

“She just doesn’t break,” interjects her mother, Elizabeth, “even if it seems like a lost cause.”

Feingold remembers nothing about the May 4, 2009 incident on the Yarkon River that nearly ended her life. 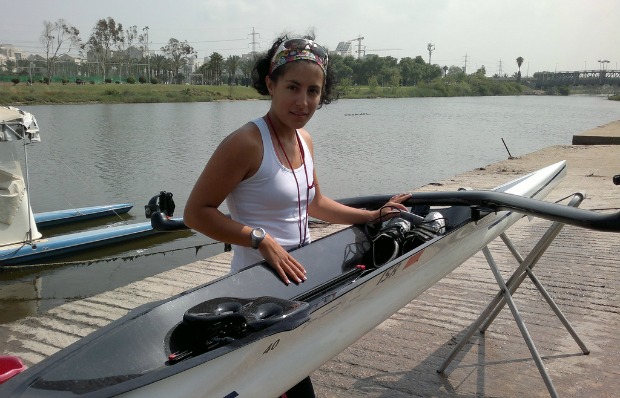 Feingold goes out on the water every day. Photo by Abigail Klein Leichman

Somehow, her racing shell overturned and her shoes got tangled, trapping her underwater. Because the Yarkon is notoriously polluted, onlookers hesitated to come to her rescue. It was a full four minutes until 62-year-old Avi Toibin jumped in and dragged Feingold out – an act for which he later won a presidential citation.

A Magen David Adom crew resuscitated Feingold and took her to a nearby hospital, where she spent three days on artificial respiration. A week later, she was transferred to Beit Levinstein Rehabilitation Center in Ra’anana – one of the best such facilities in the Middle East if not the world — and remained there for a year.

She gave up her dream of studying aeronautical engineering at Imperial College of London, but returned to rowing despite cognitive damage that she is still struggling to overcome. Controlling her pace and focus are major challenges as a result of her injuries.

More than three years on, she still goes to rehab once or twice a week. Her math studies at the Open University, and her daily rowing, are just as critical to her recovery. In fact, the two skills are related.

“Rowing is very systematic and technical, very precise. The stroke has to be really accurate, the technique has to be perfect — especially for me because I’m in lightweight rowing. In heavyweight you can just build more muscles and compensate that way. I can’t do that,” she explains. “Today I do 50 intervals and I need to count them, and it’s hard to focus on that when there are so many other details to manage on the water. I need to concentrate, and that’s very hard.”

When she first went back on the water two years ago, her mother would bike along the shoreline, calling out intervals and instructions.

Coach Dan Rutenberg or her mother or a volunteer always watch over her.

“A few months ago, a running group from Nice Corporation offered to accompany me,” Feingold tells ISRAEL21c in November. “They are a lovely group and it is great to be joined by them. It would be very helpful to have more volunteers so that I can increase the volume of training sessions on the water.” 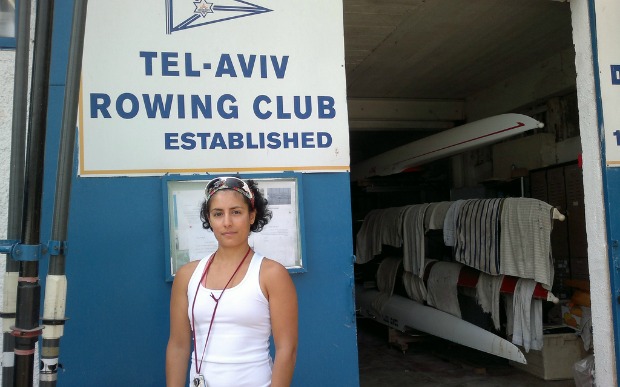 The Tel-Aviv Rowing Club is Jasmine Feingold’s home away from home. Photo by Abigail Klein Leichman

Asked if it’s difficult for her to see her daughter navigating the Yarkon after the accident, Elizabeth Feingold smiles. “Her essence is to do things against the odds. She likes the challenge. So I support her in whatever she does, and sometimes she does wacky things.”

Born and raised in Tel Aviv, Feingold was always athletic but never much of a swimmer. “I don’t like water, actually. I know it’s strange,” she says with a laugh.

When she returned from a year at the American School in London at age 12, she played on a volleyball team and then met new friends who hung out at the rowing club. “At first it was a social thing, and after a few months I realized I loved it,” says Feingold.

She won her first Israeli competition in 2004. As an “outstanding athlete” in the Israeli army, she could have chosen an easy assignment, like lifeguarding on base. Instead she taught math at a nearby high school for the two years of her service, sandwiched between daily training sessions.

Today she spends two early morning hours on the water, then does yoga and devotes the rest of the day to schoolwork. She often gives inspirational lectures about her ongoing rehabilitation.

Eager to get back into international competition, her sights are set on the 2016 Rio Olympics, where lightweight single sculls are expected to be a new category.

“I’m very proud to represent Israel abroad,” she says. “Even if you’re only training in another country, it feels like you are on a mission.”