Arik Peled was out walking his dog one night several years ago. Also out with her pooch that evening was his neighbor Dr. Ruti Kapon, a Weizmann Institute of Science researcher. She inquired about Arik’s new baby, and the two began to chat about breastfeeding.

Peled told Kapon that he and his wife, Dana, were frustrated by their inability to know exactly how much milk the newborn was getting while nursing. In fact, this very frustration is frequently cited as the reason why half the mothers who start out breastfeeding their infants switch to the bottle a month later – a trend that has pediatricians concerned.

Well, Kapon said she had an idea for a technology that could measure the amount of milk in the breast. And Dana Peled was willing to test it out.

Fast forward to spring 2013. MilkSense, the world’s first device for estimating how much mother’s milk is getting to baby’s tummy, is going on the market in Israel and headed to other countries in the near future.

The device results from that dog-walking conversation and a lot of hard work by the team at Bradley & Luka, the Israeli startup, founded in 2008 and named for the dogs that got their owners talking, says Assaf Nahoum, a friend of Peled’s brought in for his business acumen early in the game. 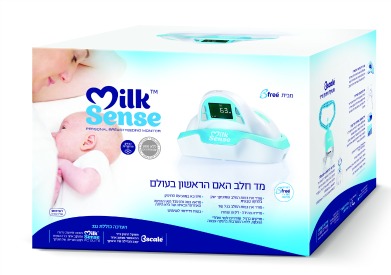 The kit, marketed by B-free, is a world first.

Focus groups with nursing mothers revealed that they liked the idea, but would not use a product that obstructed or disrupted breastfeeding in any way.

In keeping with that proviso, the handheld MilkSense was designed to go on the breast for 10 seconds before and after feeding. It then gives a reading within seconds.

Early prototypes were manufactured in China, and after about one year of tinkering, last May the founders gave a test device to 50 Israeli women to try at home.

“After two months, when we saw most of them really liked it, we got into the stage of manufacturing for commercial purposes,” says Nahoum. “Now we are starting sales in Israel, and then Europe, the Far East and the USA.”

MilkSense is available at the Doctor Baby chain as well as the My Baby superstore in the Galilee and other independent shops. The package, selling for the equivalent of about $150, includes a baby scale developed by the Bradley & Luka team. 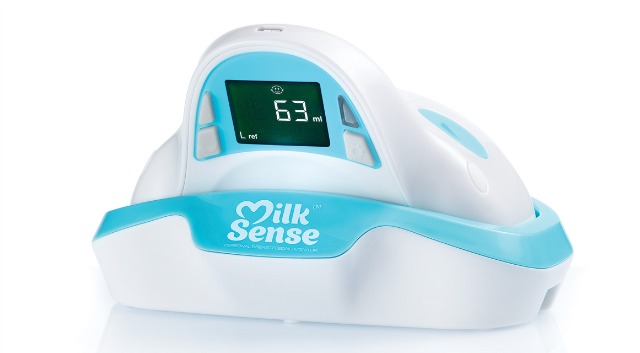 “We had some mothers who came to our testings and said, ‘Okay, now we know the baby had 60 ccs of milk, but what does that mean?’ So we gave them the scale to complete the picture,” says Nahoum, who became a first-time father 18 months ago.

The product is marketed and distributed by B-free, an Israeli brand of widely exported products such as bottles, pacifiers and breast pumps free of the harmful plastic chemical additive Bisphenol-A.

For now, MilkSense is made in China and packaged in Israel, though Nahoum says he is seeking an affordable manufacturing solution in Israel as the company expands.

Started with bootstrap seed money, Bradley & Luka attracted private investors including B-Free, Proxima Ventures and Ahikam Vin. New products for the breastfeeding market are on the drawing board at this Tel Aviv-based company under the guidance of CTO Dr. Shahar Seifer and researcher Revital Schneider.

“As parents, we have a need to know how much our child is eating, and this need is even more urgent when the baby is small and you have no clue how much he’s getting from the breast,” says Nahoum. “There is much anxiety. We are trying to give new parents some reassurance that the baby is eating enough, so you won’t stop breastfeeding.”