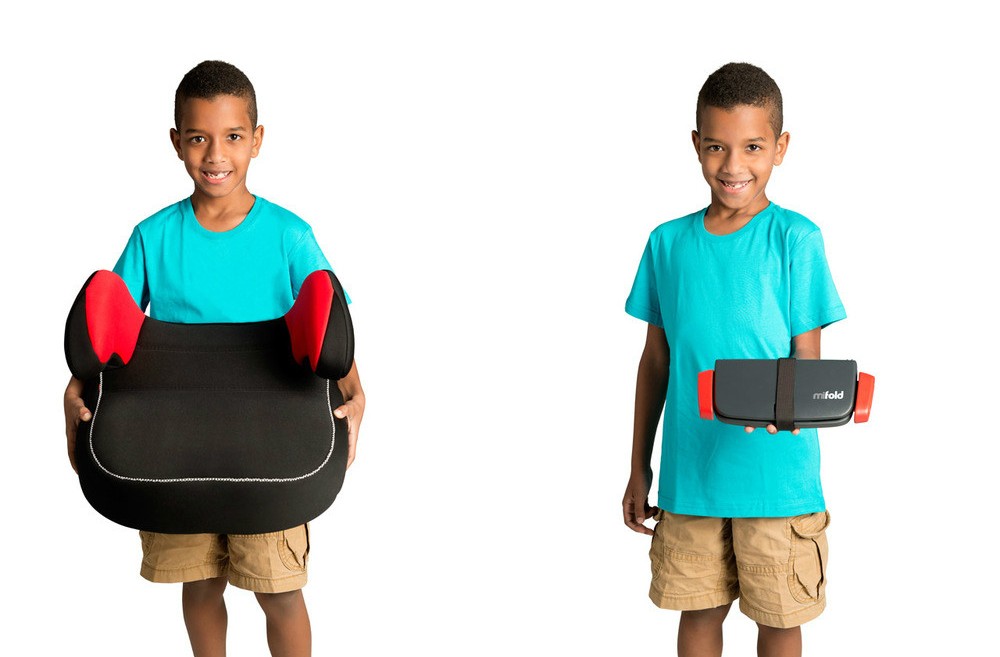 Even a kid can carry around a Mifold Grab-and-Go seat. Photo: courtesy

Until now, it has been a fact that child safety seats are bulky.

That was before pharmacist-turned-inventor Jon Sumroy, a father of four, came up with an idea to convert boosters into portable, foldable, compact and stylish Grab-and-Go seats.

While market research pointed to a keen interest in this product during years of development, it wasn’t until Sumroy launched a crowdfunding campaign that this Israeli-British entrepreneur truly understood the need by parents everywhere for a better solution to car safety for their children.

Sumroy’s company, Mifold, hoped to raise $40,000 over a 30-day period via crowdfunding. The company met that goal in less than three hours.

“We’ve known for a long time that we had a product that people wanted. We didn’t realize just how enthusiastic people were going to be so quickly,” the Ra’anana-based creator and CEO of Mifold tells ISRAEL21c.

The idea for these revolutionary car seats, which can be folded to portable size (10 by 10 inches), popped into Sumroy’s head in the year 2000. At the time, he had three children and found it near impossible to constantly juggle bulky booster seats from car to car depending on who would be driving them on carpool days. 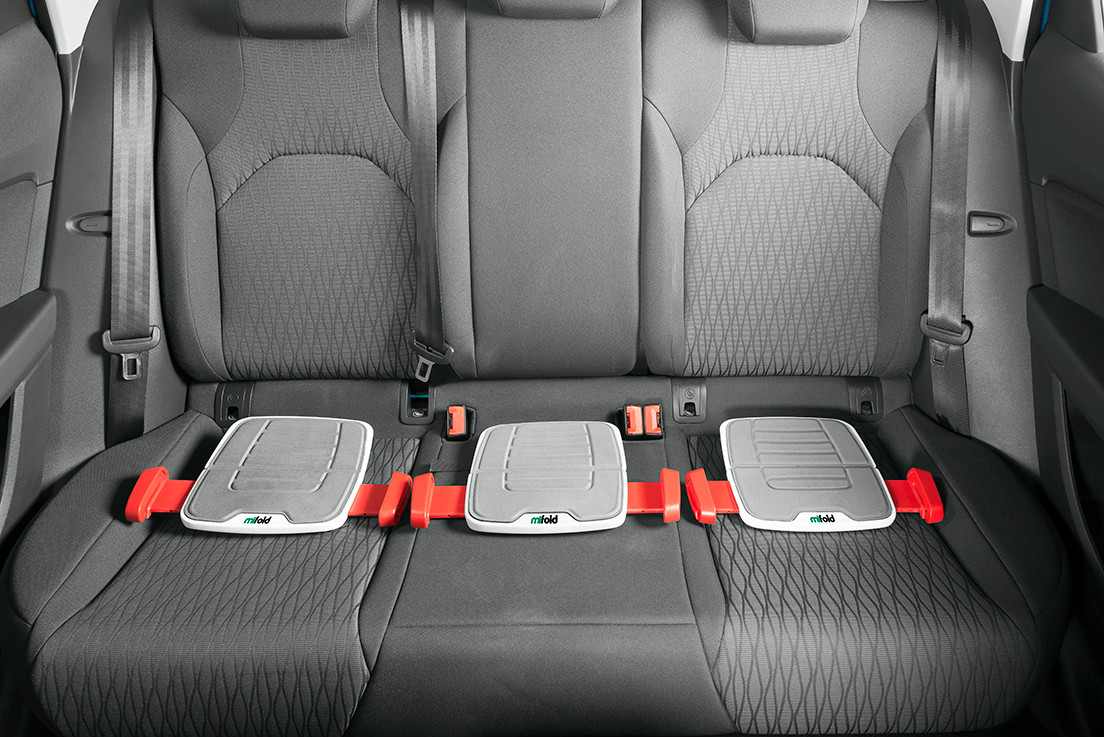 Three of the booster seats can fit comfortably in the backseat of the car. Photo: courtesy

So, while everyone else focused on improving car-seat exteriors and cushioning them to lift a child into the proper position of an adult, Sumroy decided to go against the grain and lower the belt to better fit a child. The Mifold seat is 10 times smaller than a standard-sized booster seat – meaning it can fit into even the most compact car.

“[Mifold] could be the most innovative development in car seats in decades,” the Chicago Tribune declares.

“We’ve known for a long time that we had a product that people wanted. We didn’t realize just how enthusiastic people were going to be so quickly.”

The veteran developer, whose children are already too old to enjoy this innovation, credits Israeli creativity with making his idea a reality. He acknowledges that while he’d always known Israel was great for high tech, what he discovered while working on this project was that there are “unbelievably creative people in all fields here.”

“I’m using Israeli industrial designers based out of Tel Aviv, I’m using Israeli mechanical engineers, I’m using Israeli material scientists, I’m using Israeli project managers and Israeli marketers. Everybody that’s involved in Mifold is Israeli and is based here and I think this has given it a huge benefit because this ingenuity and thinking outside the box that is classically associated with Israel from a high-tech perspective is actually relevant across all of these disciplines. I think I’m truly lucky to be here and tap into these resources.” 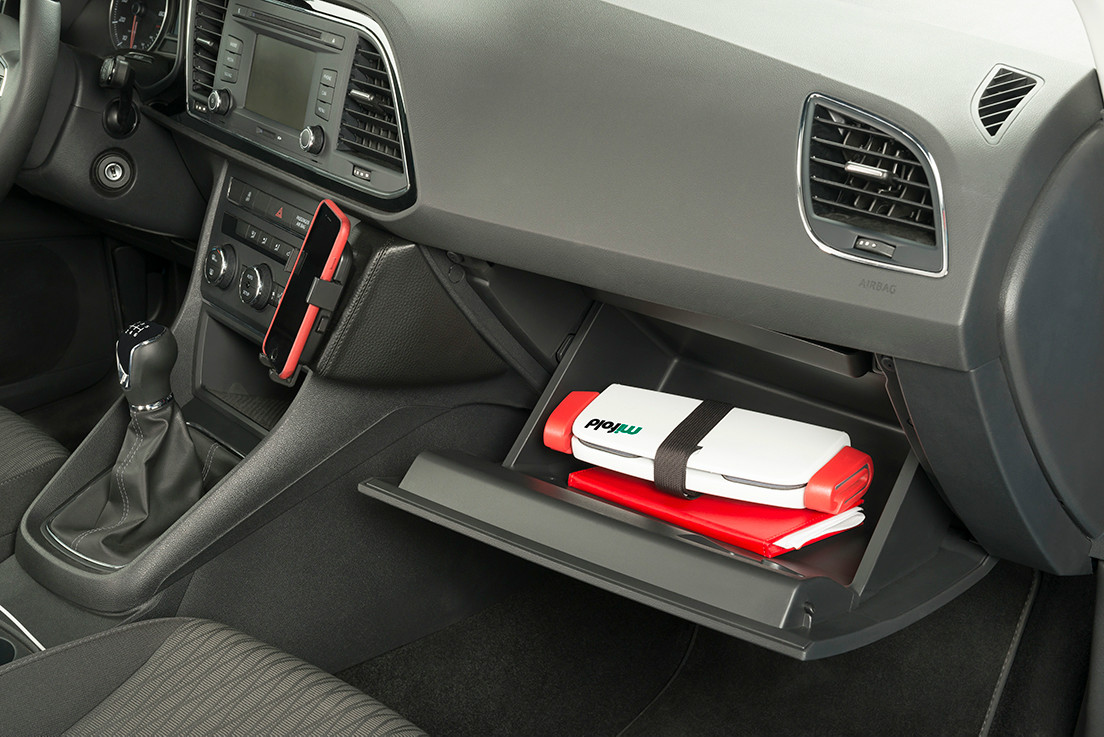 The product folds down to 10×10 inches. Photo: courtesy

For Sumroy this is not just beginner’s luck. He has held senior executive positions at 888 Holdings, Unilever and Johnson & Johnson in his career. He has professional experience in marketing, brand communication and advertising and has received a number of international awards for advertising communication and innovation management.

Mifold officially launched in 2013. There are four team members; they’ve had two successful funding rounds already, and their product is patented. The company turned to crowdfunding to increase its exposure and to better estimate how many units they’ll need for the first production run.

“We set ourselves what was an achievable target, $40,000. We set it slightly below what we thought we could achieve. We’ve just been delighted by the results,” Sumroy tells ISRAEL21c. “I think we’ll be really happy if we hit a quarter of a million dollars. And we’ll be over the moon if we get to $300,000.

“We have no fear to be able to deliver the demand that comes from this crowdfunding campaign,” says Sumroy. “We absolutely will deliver.”

UNCOVER ISRAEL - Get the ISRAEL21c
Weekly Edition free by email
Sign Up Now!
Bring Israel's story to life.
Millions of people around the world rely on us to gain a deeper understanding of Israel. We are the trusted source for original content you won't find anywhere else.
You can make a difference. Donate today to support journalism that brings Israel’s story alive.
SUPPORT ISRAEL21c
Read more on:   crowdfunding, Technology, folding booster seat, portable car seat, Mifold