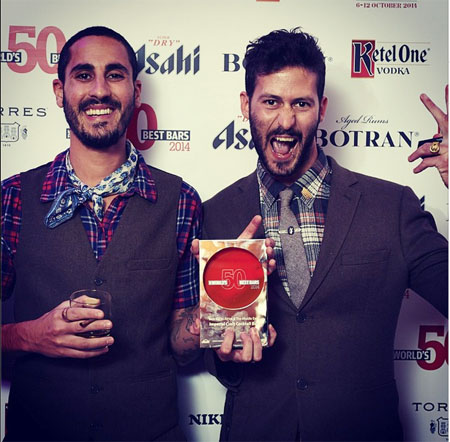 For custom-tailored specialty cocktails in Israel, the place to go is The Imperial Craft Cocktail Bar in Tel Aviv. At least, that according to Drinks International magazine’s annual best bar poll.

This self-described ‘temple to the lost art of the cocktail’ was chosen as the Best Bar in Africa and the Middle East at the magazine’s 50 Best Bars Awards.

Over 330 nightlife and alcohol experts chose the winners. London’s The Artesian took first prize for its third year in a row while New York’s The Dead Rabbit was runner-up (and also named the best bar in America).

The Imperial Craft Cocktail Bar (usually called The Imperial) was opened in January 2013 by five veteran bartenders. The bar menu offers a whopping 150 cocktails — but not all at the same time.

While it won Best Bar in the Mideast and Africa, this Hayarkon Street joint failed to cut the world’s Top 50 and was given a world ranking of 56. Still, in the write up of the bar, the judges say because of its newcomer status they “expect it to improve.”

“The bar is a nod to colonial times – mainly the European colonies of south east Asia,” Bar Shira, one of the founders, tells Drinks International. “We wanted it to resemble an officers’ club or a European-owned hotel in India or Vietnam.”