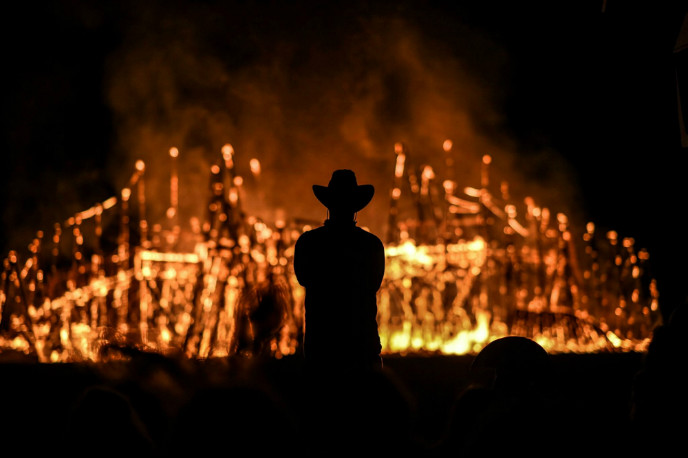 Watching the statues burn at the Midburn Festival. Photo by Ben Kelmer/Flash90.

It’s three in the morning, and I’m lying on a mattress inside the Kino Time Resonance Pyramid, absorbing the throbbing, pulsating music emanating from the highest-quality loudspeakers. My audial senses saturated, I emerge into the star-filled Negev landscape as multitude lasers paint psychedelic pictures in the sky.

Hundreds of happy, dust-covered revelers dance like there’s no tomorrow in half-a-dozen installations around the sprawling site of Midburn, the Israeli version of the iconic Burning Man festival held annually in the Nevada desert. 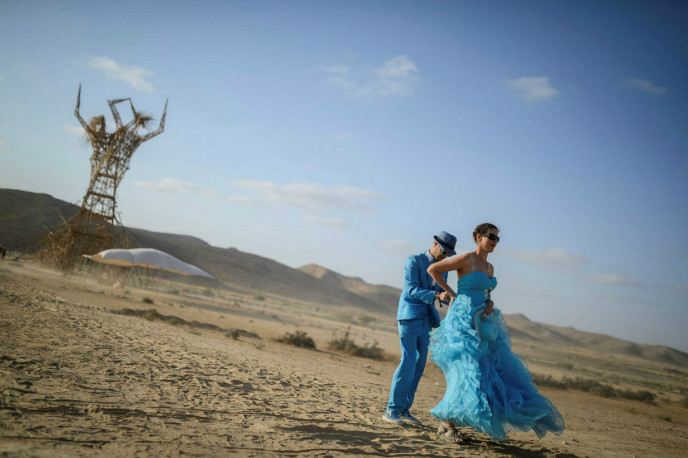 Anything goes at the desert festival. Photo by Ben Kelmer/Flash90.

The second Midburn, which ended a week ago near David Ben-Gurion’s home kibbutz, Sde Boker, attracted some 6,000 people, more than twice last year’s number – making it the third-largest event of its type anywhere.

It almost didn’t happen, due to police concerns about issues including public nudity, but Midburn spokesman Eyal Marcus told ISRAEL21c that compromises reached in court at the last minute let Midburn go forward.

Transforming the arid Negev desert into an oasis of creativity in such a short time is no simple matter – yet somehow they did it. The five days of art, dance and music that ensued were truly memorable; they reminded me of my Burning Man experience from 1999. Like in Nevada back then, it felt like a multi-talented wunderkind approaching maturity. 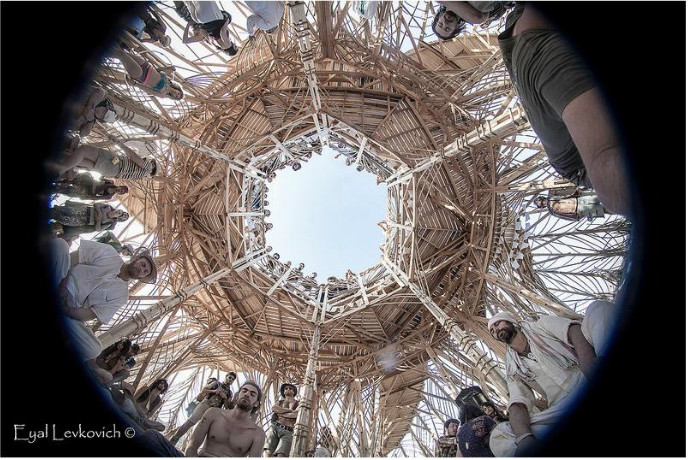 Some 6,000 “Burners” attended the festival. Photo by Eyal Levkovich

Midburn and Burning Man run on 10 principles: radical inclusion (anyone may take part), gifting, decommodification (“unmediated by commercial sponsorships, transactions or advertising”), radical self-reliance, radical self-expression, communal effort, civic responsibility, leaving no trace (“We clean up after ourselves”), participation and immediacy (“to overcome barriers that stand between us and a recognition of our inner selves”).

Midburn’s organizers said their aim was to create a “platform which will allow a communal lifestyle, creativity, art and radical self-expression.”

The art exhibits, statues, interactive installations, round-the-clock performances and music – and especially the emancipating atmosphere – stimulate desire to go beyond one’s normal boundaries. It usually takes first-timers a day or two before they dare cruise the “playa” dressed as an alien. By Midburn’s third day, the creative social space resembled a mass Purim party.

“It’s soooo good to feel this free,” hollered a teenage girl with abandon, as she twirled in synch with a hula-hoop.

People of all ages and backgrounds took part in the event. Photo by Ben Kelmer/Flash90.

“It’s difficult to categorize the ‘burners,’” says Marcus, 34, who took leave from his job at the head of a digital marketing company. “There are people here of all ages and backgrounds, although high-tech and business people seem to be disproportionately represented. The average age is probably approaching 40.”

Midburn — a portmanteau of midbar, the Hebrew word for desert, and the English word burn — is organized by a non-profit that insists on full transparency of its accounts.

“Last year the event lost 80,000 shekels, but this was made up through a series of money-raising parties,” says Marcus. 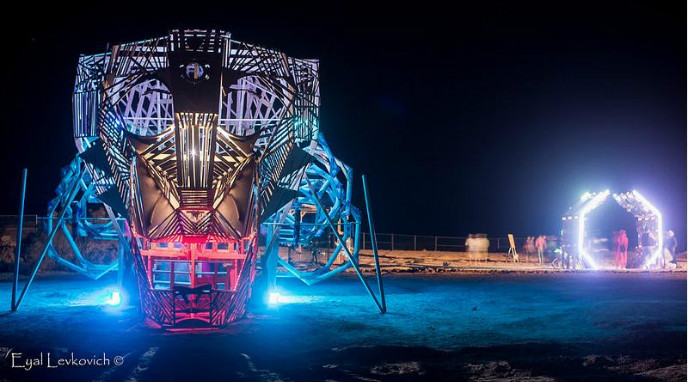 Inside the festival, money does not exist, as if based on a law taught in no economics class: that sharing produces abundance.

Gift-giving is a core principle in this free-exchange economy: Many of the theme camps were based on it. The camp I belonged to, called Coffee and Cookies, served as a 24-hour hangout. Next to us was an eco-camp and one devoted to playing eclectic music.

Each camp was set up by an organized group, who had obviously invested no small amount of effort and imagination. Their themes ran the gamut: One camp was manned by deaf people teaching sign language, another offered watsu treatments in a pool inside a whale-shaped structure, the gay community set up the “straight-friendly” camp. Others had more esoteric themes and some were based on unabashed hedonism. 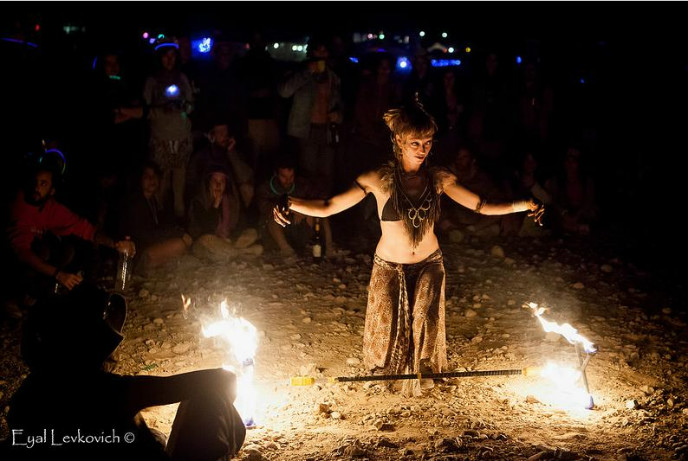 “I’ve noticed what’s happening with all the young Israelis who have attended plenty of ‘spiritual’ festivals in the past,” said Sharon Avital, 39, a university lecturer and researcher from Kibbutz Palmahim. “Instead of the gradual commercialization of the so-called New Age, here money is not an issue. I see them doing things, generating ideas, full of creativity and playfulness – a change of consciousness. Everyone is in such good spirits, with infectious smiles. This festival is bringing the best out of their generation. It will continue to make waves in Israeli society.” 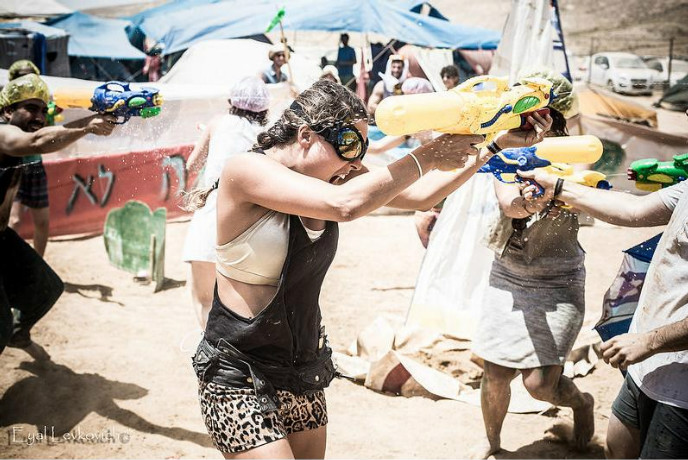 Midburn’s organizers said their aim was to create a “platform which will allow a communal lifestyle, creativity, art and radical self-expression.”

Comparisons with the mother event were inevitable. Dr. Amotz Zivav, a biologist, and his wife Adi have been to the Burning Man twice.

“This shows that despite all the objective difficulties of living here, Israelis can be as creative as the wildest Americans,” he said. “The vibes here are as warm as they are in Nevada. What a party!”

An estimated 500 people came from abroad especially for Midburn. “It feels very similar to the Burning Man in America,” said David Michael, 59, a house builder from an ecological community in southern England. “My wife Helen and I flew in the day before and are leaving the day after. I’ve been to Israel several times before, but never met Israelis like these wonderful people. Everyone is so helpful and friendly. And the artworks are amazing.”

“They’ve grabbed the concept by the throat,” Helen elucidated.

“I’m simply enchanted by all the wonderful works of art out there,” exclaimed Dodi Rosen, 60, who volunteered in the kitchen that fed the hundreds of hard-working volunteer camp constructors before and during the festival. “There is so much quality, so much creativity, so much originality. It’ll take time to fully absorb what I’ve experienced this week. There’s no way I won’t be back next year.”

For the organizers of Midburn 2015, the event was undoubtedly a success, though claims have since emerged that the festival accidentally damaged an ancient archaeological site. It created a buzz throughout the country, and the lucky 6,000 participants (one does not attend – one participates) will for years boast “I was there.”

Even though they could easily sell 20,000 tickets next year, the organizers have no intention of doing so. “We want it to grow slowly, organically,” says Marcus. “The aim is to maintain our uniqueness and quality.” 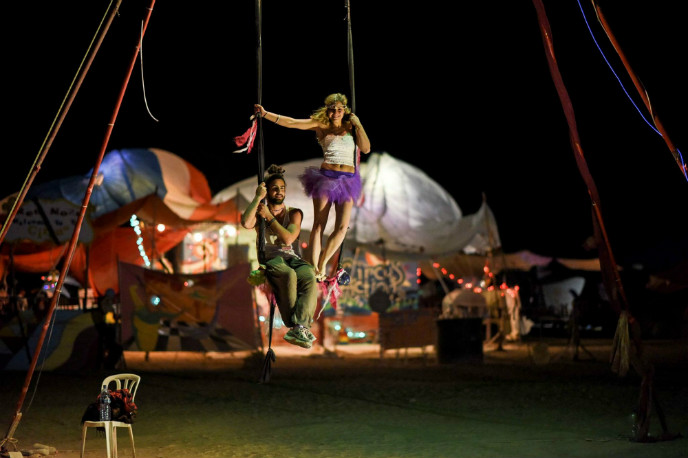 Each camp has a different theme. Photo by Ben Kelmer/Flash90.
ADVERTISEMENT
ADVERTISEMENT
YOU CAN GET ISRAEL21c NEWS DELIVERED STRAIGHT TO YOUR INBOX.