Barcelona soccer great Lionel Messi and his teammates are in Israel on an educational mission meant to inspire children from Israel and the Palestinian Authority areas to work together. The Spanish stars staged two ‘training camps for peace’ during their stay.

Peres called the Spanish players ‘messengers of peace’ and said Israeli and Palestinian children dream of ‘the great goal of peace.’

At a reception in their honor, the president said: “Sport, and football in particular, breaks down barriers. In football there are no victims but always hope for the next match.”

Earlier in the day, the Barcelona players visited the Western Wall in Jerusalem. Tourism Minister Dr. Uzi Landau presented a Goodwill Ambassador for Israel certificate to Sandro Rosell, the President of Barcelona FC.

“Welcome to Israel! For us, first and foremost, you have come to Israel as tourists, and not just regular tourists – your arrival here has turned into a national celebration. I present you with this certificate, with gratitude and in the hope that you will share your experiences about the real Israel with family and friends on your return home,” Landau told them. 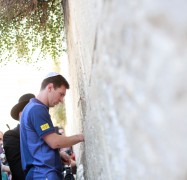 Putting a note in the Western Wall.
He added: “The Tourism Ministry sees great value in the visit of the Barcelona football club in encouraging tourism to Israel. Football is an international language and it is enough that millions of Barcelona fans around the world will see photos and video of their team visiting the Western Wall, places of entertainment and other tourism sites in Israel in order to promote tourism to Israel. ”

Last night, they trained with young Palestinian athletes in Hebron. More than 25,000 spectators came to cheer on their sports heroes.

The training sessions were organized by the Peres Center for Peace as well as the Israeli and Palestinian Authority football federations.

“The goals are important but it’s also crucial to educate children and try to bring them together,” said Barcelona midfielder, Andres Iniesta.

“Sport is the best way to overcome hate and hostility,” said Jibril Rajoub, president of the Palestinian Authority football federation, told reporters. Rajoub described the visit as an “historic day.”

The Barcelona players also made a stopover in Bethlehem.