A groundbreaking computer program from Israel helps to maintain and improve memory in early and middle-stage Alzheimer’s patients.

A computer program innovated by therapists at an Israeli Alzheimer’s facility helps to maintain and improve memory in early- and middle-stage victims of this devastating common cause of memory loss in the elderly.

The Savion program is the first in the world designed to provide cognitive stimulation for people suffering from dementia, says Melabev general director Motti Zelikovitch. It was developed over a decade of testing and refining by professionals at Melabev’s Jerusalem-area day centers for elderly clients with Alzheimer’s symptoms.

“Through memory-enhancing training, Savion slows down the mental deterioration associated with Alzheimer’s, with overall improvements made to the patients’ memory and information-processing skills,” Zelikovitch tells ISRAEL21c. The program is available in Russian, Hebrew, English and Greek versions, with Arabic and French interfaces soon to follow.

Riding a wave of interest in Savion and its other novel approaches, Melabev is entering into a working partnership with the Alzheimer’s Foundation of America, representing some five million Americans affected by this progressive degenerative disease that causes impaired memory, thinking and behavior. That number is expected to increase dramatically as the “baby boomer” generation ages.

Zelikovitch explains that while Alzheimer’s initially affects short-term memory, Savion focuses primarily on stimulating and stabilizing long-term memory skills. “We have to work with the long to come back to the short,” he says. Melabev therapists have found this strategy successful in low-tech activities as well, such as creating a memory book with old family photos leading up to present-day pictures of loved ones.

The goal is to limit the loss of intellectual function, and ideally to improve it. “We now suspect that a certain level of neuronal plasticity does exist in Alzheimer’s patients, enabling people to acquire new computer skills,” says Melabev gerontologist Rakel Berenbaum. “Savion’s impact is even more pronounced when used within the framework of Melabev’s integrated therapy approach.”

The centers also offer pet, art, music, gardening and prayer therapies along with Memory Clubs led in Hebrew, English and Russian for those with mild memory and cognitive impairments. Staffers carry out regular memory testing to gauge improvement.

Interest from New York and Cleveland 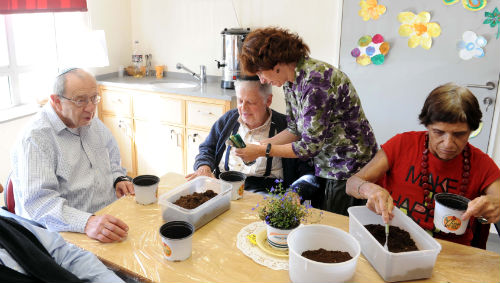 “Innovation and new technology is becoming a big part of what we do,” relates Paul Holm, an organizational development adviser to Melabev. And these trends are generating great interest abroad. “We’re forming an international board and an international medical advisory board and getting a tremendous response to both.”

Savion, named for an Israeli flower whose first syllable, sav, is the Hebrew word for “grandfather,” is available for purchase by individuals and eldercare facilities worldwide. Zelikovitch recently met with administrators of leading inpatient facilities in New York and Cleveland who are interested in acquiring Savion for their residents. Next, he goes to London.

A delegation from the Alzheimer’s Foundation of America is slated to visit a Melabev site this month to watch Savion in action. The visitors will also observe innovations in art and sensory therapy as well as new ideas such as training guide dogs to lead Alzheimer’s patients home if they wander. Melabev will shortly release an English translation of its comprehensive guidebook to Alzheimer’s, following wide interest in English-speaking countries.

Started 30 years ago by the chief of gerontology at Shaare Zedek Medical Center to provide community-based follow-up care for Alzheimer’s patients, Melabev serves nearly 700 clients and provides training and support to thousands of family and professional caregivers at its Institute of Geriatric Studies.

“We are starting to take Melabev out to the rest of the world,” says Zelikovitch, concluding, “We all need to work together because Alzheimer’s is a worldwide problem, and it’s growing.”

UNCOVER ISRAEL - Get the ISRAEL21c
Weekly Edition free by email
Sign Up Now!
Bring Israel's story to life.
Millions of people around the world rely on us to gain a deeper understanding of Israel. We are the trusted source for original content you won't find anywhere else.
You can make a difference. Donate today to support journalism that brings Israel’s story alive.
SUPPORT ISRAEL21c
Read more on:   Health