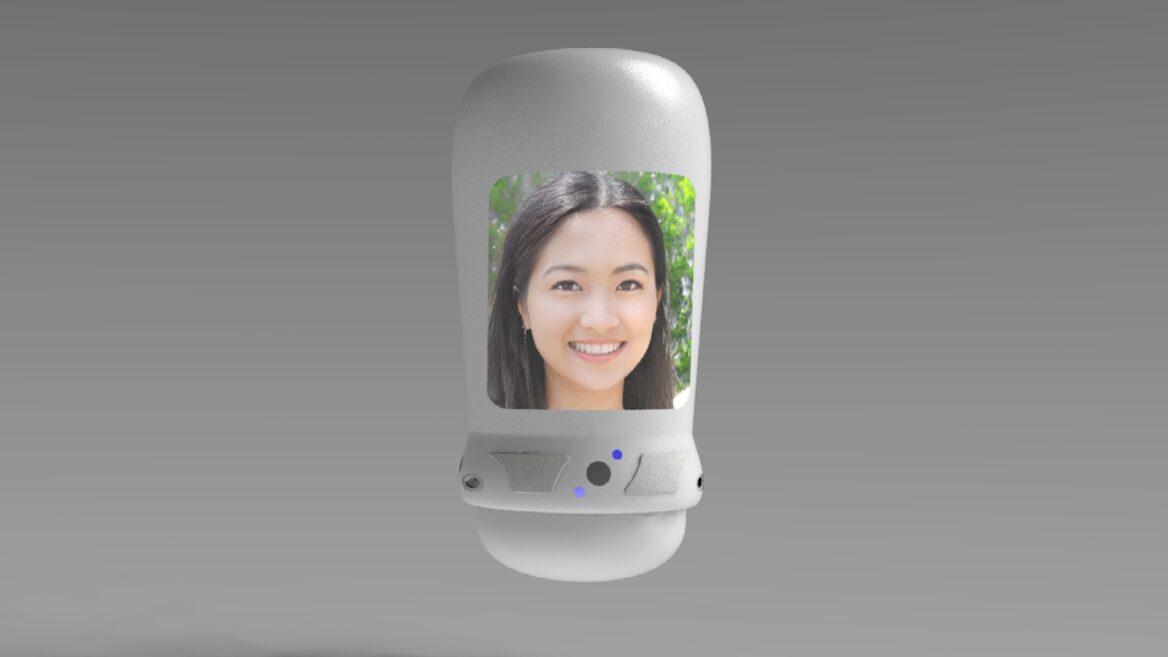 Zeppi floats to the video call participant and centers the face perfectly. Photo courtesy of Zeppi

During the many months of the Covid-19 crisis, we’ve all had to become experts at video conferencing.

But finding the right setup for a virtual meeting on your computer, smartphone or tablet remains a challenge. The screen is often too high or too low and all the other side can see is a chin or a nose close-up.

An Israeli startup has an almost cartoon-like solution for angle awkwardness: Zeppi affixes the video screen to a helium-filled balloon that floats to exactly the right position for the perfect not-quite-live face-to-face interaction. Zeppi also can hop on conference calls and Zoom classes.

While Zeppi should be able to help make any video call more enjoyable, the product is aimed primarily at seniors who are less savvy with technology and in some cases may have a hard time getting to the computer.

On the Zeppi website, for example, is a video featuring the daughter of an older adult who can’t reach her father. She navigates Zeppi through her father’s house until she finds him. Dad doesn’t have to tap any buttons to answer the call or learn a new complicated interface; Zeppi is voice-controlled. Zeppi can also initiate calls, so dad can call his daughter.

Zeppi’s screen is 20 inches tall, about the height of a real person’s face, although “screen” is not entirely accurate. Zeppi’s tiny projectors display the video on the balloon so it doesn’t have to lug around a heavy screen.

Zeppi fits into the larger category of telepresence devices. Fans of the TV show The Big Bang Theory may recall an episode where Sheldon builds a robot with a screen so he can zip around the office while remaining in his germ-free bedroom.

The bit was played for laughs, but the limitations of this fictional device were in Eitan Lavie’s and Zohar Karni’s minds when they were designing Zeppi – they wanted to create a device that wouldn’t bump into walls or trip down the stairs. That’s how idea of using helium was born.

During a video call with Karni, she assured us that, unlike the hydrogen-filled Hindenburg blimp that caught fire in 1937, Zeppi is filled with the non-flammable gas helium. (We didn’t use Zeppi for our chat – the product is still in the proof-of-concept stage.)

That said, Zeppi uses a modicum of artificial intelligence to avoid such dangers as fans and windows. (If it finds its way outside, Zeppi will simply float away.)

Zeppi has a battery-charging docking station to which it self-navigates when it’s done with a call. The device can run for several hours before needing a recharge. The docking station also refills the helium when necessary.

Zeppi can be programmed with “no entrance” zones to protect the owner’s privacy. Zeppi’s camera faces the wall when it’s in its docking station.

Zeppi addresses a need that CEO Lavie had when he relocated to Canada for a few years.

“That was the first time I experienced firsthand how difficult it was to maintain contact with my parents,” he explains. “How can they hang out with their grandchildren? How can I help them out with the small things in the house?”

Then there’s the loneliness factor. Forty-three percent of older adults suffer from isolation. That’s only gotten worse during the Covid-19 crisis. Moreover, 53% of adults aged 71 and up have never used video calls. Lavie says that video calls can decrease loneliness by over 50%.

Zeppi is intended to allow “people with impairments or diminishing capabilities to operate these devices,” Karni tells ISRAEL21c.

Zeppi simply follows you while you’re chatting. Need to make a cup of tea? No need to carry your iPad to the kettle. Zeppi knows how close to get for ideal video resolution. 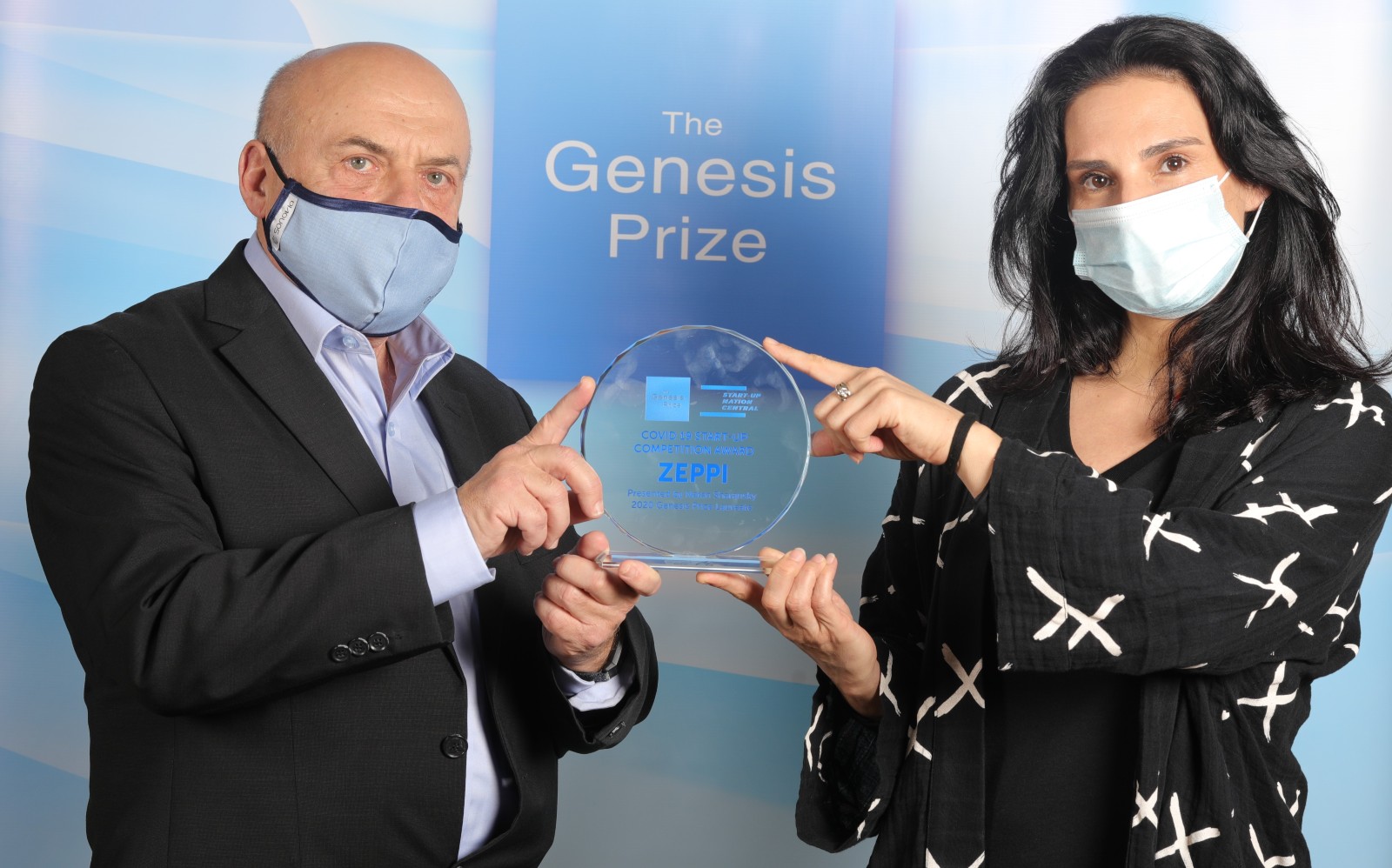 Zeppi can also turn its gaze outward; that helps a remote family member assist with technical problems around the house, such as what does that blinking light on the microwave mean or why is the washing machine overflowing?

“We see Zeppi mainly as a communication tool,” she says.

Other telepresence robots that Zeppi competes with including those from Double Robotics – which looks like it was designed by The Big Bang Theory’s Sheldon himself – GoBe Robots and Ava Robotics.

Individuals and their families eventually will be able to buy Zeppi, although initially the device will be sold through homecare agencies, most likely for a monthly subscription.

Nahariya-based Zeppi was one of 15 companies to split a $1 million prize from the Genesis Foundation in 2020. It was the youngest company of this year’s cohort. The Genesis organization chose Natan Sharansky as its winner last year; Sharansky chose to donate his prize money to companies working to mitigate the impact of Covid-19.

“We’re not looking to replace human touch or physical presence,” Karni reassures us, “rather to provide an additional layer of communication when being there in person is not possible.”

Zeppi is now raising money and hopes to have a working product for sale later this year. It has signed on Equinoxe Lifecare in Canada as a strategic partner.