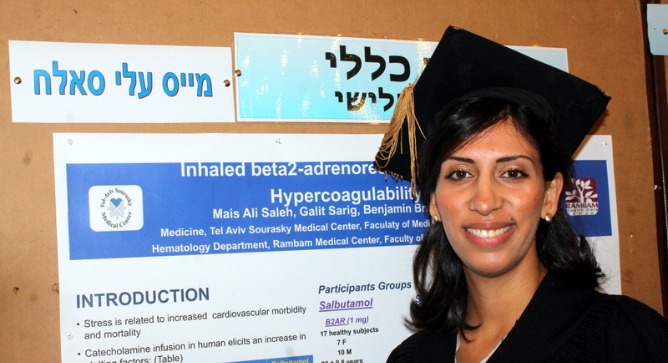 You’ll find Israeli-Arab physicians on staff at every Israeli hospital. But only Carmel Medical Center in Haifa can boast that its newest Israeli-Arab obstetrician-gynecologist, Dr. Mais Ali Saleh, recently graduated No. 1 in her class at the Technion-Israel Institute of Technology, one of the country’s top medical schools.

Just getting admitted to one of Israel’s five medical schools demands near-perfect test scores and a dazzling personal interview. Graduating at the top of the class is quite a feather in the cap of this 27-year-old Muslim from a village near Nazareth, who was not fluent in Hebrew when she began her studies.

Though she won an academic award of excellence from Israel’s parliament in her first year of medical school, Ali Saleh tells ISRAEL21c that her secret was not just smarts.

‘I think the main thing is to divide your time wisely between study, work and personal life,” she says. “I didn’t just learn material right before a test. I was constantly reviewing. If you study little by little, you internalize it better. And I made time to have fun. At four or five o’clock I’d finish studying, close the books and go to the sea.”

Considering that she held down jobs all through seven years of medical school and internship — as an instructor in a psychometric exam prep course, an educator in the Technion’s Student Advancement Center and a research assistant in the clinical biochemistry laboratory – time management was critical.

Ali Saleh also got married while in the midst of her studies. She began dating Technion medical student Nidal Mawasi in 2006 and they wed in 2009, a year after his graduation. The couple lives in Haifa and expects their first child at the end of October. Ali Saleh intends to continue working at the hospital half time and in a community practice half time.

Always dreamed of being a physician

Ali Saleh grew up in the mixed Muslim and Christian village of Yafa an-Naseriyye (Jaffa-Nazareth), population 18,000.

“From the time I was five years old, I wanted to be a doctor,” she says. “I was never interested in anything else.” Her parents fully supported this goal. 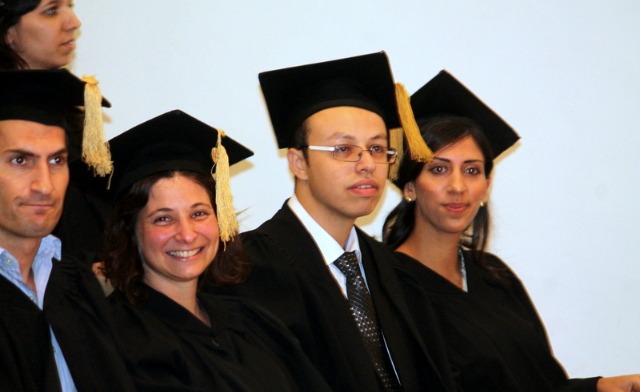 The valedictorian is seated at far right.

She decided on her future specialty when she was still in high school, seeing that there was only one female physician in her village. “Most women prefer a female doctor for childbirth and to treat intimate medical problems such as urinary incontinence,” she explains.

Language was a barrier she had to overcome when she began at the Technion’s Ruth and Bruce Rappaport Faculty of Medicine. She had learned Hebrew at school, but was not fluent.

Ali Saleh chose not to avoid this hurdle by studying in Jordan, as some other Israeli-Arabs do. She was determined to go to an Israeli medical school for the better quality of instruction and greater employment opportunities after graduation.

Earning superior grades on admissions exams was key, though she modestly insists scores alone do not provide the full picture.

“Getting high achievements in the psychometric exam doesn’t make you a better student,” she says. “You need to solve many complicated questions in a very limited time, and this is a major obstacle for both Jewish and Arab students.”

She was hardly the only Israeli-Arab to make the grade. “The Technion medical school has about 35 percent Israeli-Arab students,” she says.

Overall, Arab students make up some 20% of the university’s student body, paralleling their numbers in the Israeli population. While Ali Saleh was at the Technion, three others from her hometown village were also students there.

And Arab-Christian couple Reem and Imad Younis, who met as students at the Technion, run an international neurosurgery products business, Alpha Omega, from Nazareth.