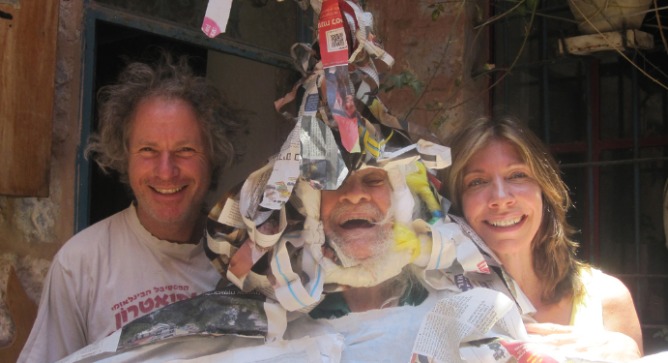 Yakin with his newspaper-clad father, Abraham, and Sarah Brown, director of “The Citadel of Golems.”

Israeli puppeteers and object theater practitioners are renowned for their out-of-the box creativity and innovation. Adam Yakin, a Jerusalem-based creator, is one of the country’s most productive artists in the field.

He is a puppet builder, mask maker, lighting designer, theater creator, actor, props designer and director. His name may not elicit many Google hits, but for the past three decades it has appeared on just about every puppetry oriented playbill in Israel.

“The Israeli puppetry scene is tiny, but it’s so creative,” Yakin, who also teaches at School for the Art of Puppetry in Holon, tells ISRAEL21c. “People working in the scene are very individualistic, looking for their own way. You have the traditional puppet theater but you’ve also got the invented ones. This is a very original place.”

Yakin recently premiered “The Citadel of Golems” – featuring oversized puppets made out of newsprint — at the 2013 International Festival of Puppet Theater in Jerusalem.

As has become customary at the country’s puppetry festivals, festival producers from across the globe were in attendance. A Turkish producer has already requested Yakin’s work.

“We don’t have a tradition of this art form in Israel. We didn’t grow up on Punch & Judy. And because there is no tradition, Israelis can create a new language in puppetry,” Dalia Yaffe-Maayan, director of the Train Theater, told ISRAEL21c in an earlier interview. “Israeli puppeteers are known as being very independent, creative and sophisticated with lots of surprises. We are invited abroad a lot.”

Should you ever require a giant puppet, Yakin is your destination.

He’s the guy behind the popular giant puppets at the Balabasta summer festival in Jerusalem. Those elaborate and highly imaginative puppets made use of an array of materials – and became one of the most popular aspects of the open-market event. 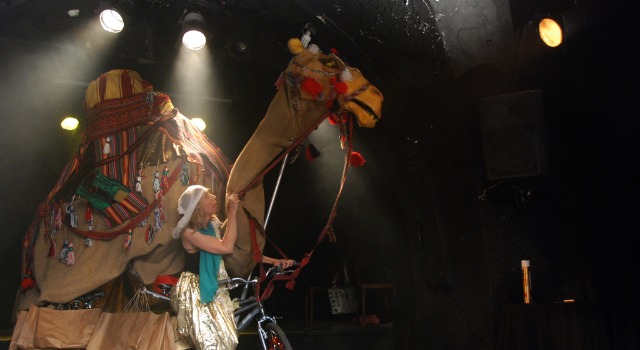 “Adam can see a puppet in anything. This is the very essence of object theater,” says his life partner, Sarah Brown, a professor of performance at the University of Memphis and director of “Golem.”

“He picked up a newspaper and just said, ‘What if it rose out of nothing?’ Newspaper, when it’s in motion, has a lot of life to it. What we wanted were characters you can’t define, yet creatures with emotions.”

Yakin’s portfolio of giant puppets is magical and unusual. There’s an enormous camel riding a bicycle, a horse made of dusters, strange animals, colossal people and fantastical creatures.

“This house is like a menagerie of creativity,” Brown says, when talking about Yakin’s Jerusalem home. The first time Brown came to visit, she says she “was completely inspired.”

Art in his genes

The mild-mannered creative genius boasts a long résumé that begins before he could even write his name.

Yakin hails from a family of artists. A fourth-generation Jerusalemite, the 46-year-old says from a young age he was drawing pictures for his mother’s animated films.

His now retired parents, Abraham and Hannah, are celebrated painters in Israel. His father most recently played a role in “Golem,” as well.

Yakin has seven brothers and sisters, three of them in the arts: Boaz does ironwork and woodwork, Daniela is a ceramist and Ruth is a visual artist.

Family time, he reminisces, included creating full-length animated movies on eight-millimeter film, for which all eight children would draw thousands of pictures. “My mom was the director. We all played instruments, we sang the songs, we acted in the films — that was my childhood. We grew with our parents and art.”

It was at the age of 14 that Yakin decided to make theater his profession. He directed two plays at age 16 and 18 before heading off to the physical theater school, L’École Internationale de Théâtre Jacques Lecoq in Paris, working as an apprentice at Arian Menushkin’s Sun Theatre and performing at the Pandur Theatre. In Israel, he attended the Sam Spiegel Film and Television School and designed sets for the Israel Festival.

He has also written, directed and designed some 40 stage productions for children in cooperation with the Jerusalem Philharmonic Orchestra, and directed and wrote musical arrangements for operatic productions. He was a puppeteer and performer at the Jerusalem Train Theater and a designer of theatrical sets for Jerusalem’s Psik Theater.

Brown invited him to teach a workshop at the University of Memphis.

“The students met this wildly talented Israeli artist,” she says. “He did shadow theater — puppet theater without puppets. Memphis had never seen anything like this.”

The Israeli puppetry scene has evolved over the years. Yakin says the innovative energy – for which Israelis are renowned — is incomparable.

“I’ve lived in New York, Los Angeles, Memphis,” says Brown, who now splits her time between Memphis and Jerusalem. “I’ve not seen anything like it. Israeli students have a sensibility of the abstract.”

UNCOVER ISRAEL - Get the ISRAEL21c
Weekly Edition free by email
Sign Up Now!
Bring Israel's story to life.
Millions of people around the world rely on us to gain a deeper understanding of Israel. We are the trusted source for original content you won't find anywhere else.
You can make a difference. Donate today to support journalism that brings Israel’s story alive.
SUPPORT ISRAEL21c
Read more on:   People, object theater, International Festival of Puppet Theater