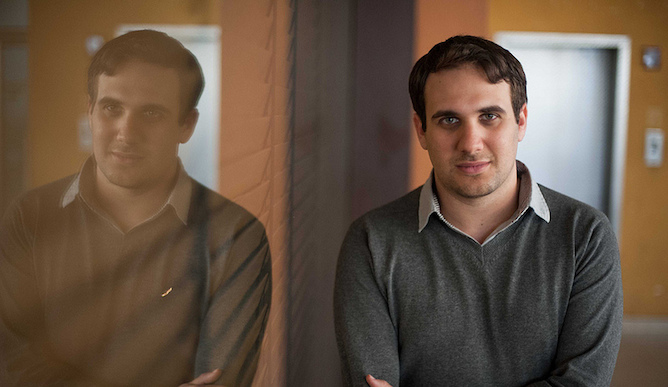 Nir Gaist was just 10 when he went into business. Photo by Asaf Kliger

High school dropout Nir Gaist, 25, is paid by the Israeli Ministry of Education to develop and teach a cyber-defense curriculum for future Israeli computer engineers.

“Yes, there is some irony in this,” he acknowledges with a ready smile during an interview with ISRAEL21c.

Gaist is one of those rare prodigies for whom a high school diploma – let alone a bachelor’s or master’s degree – would be irrelevant.

He is founding CEO of Nyotron Information Security, a Herzliya-based firm with $5.5 million in funding, serving clients in Israel, the United States and Europe. Nyotron’s “Paranoid” end-user software identifies and deflects incoming threats by analyzing the behavior of the computer rather than trying to outsmart every new virus or worm.

The company’s chairman, Maj. Gen. Amos Malka, was the IDF’s director of defense intelligence before his retirement in 2002.

The really impressive part: Gaist started the business in his kibbutz bedroom at just 10 years old. At 25, Gaist heads a growing international cyber security firm based in Israel. Photo by Asaf Kliger

By that time, he already had four years of work experience — fixing PCs on the kibbutz, and fashion modeling for runways and print ads. At 11, he joined Microsoft’s Junior Developer community. Not long after his bar mitzvah, he was participating in the Knesset’s Internet Technology Committee and giving data protection advice to Microsoft founder Bill Gates and CEO Steve Balmer.

“I did a few projects for Microsoft that were duplicated internationally, and I received an award from Bill Gates when I was 15,” he relates.

His older brother Ofer, now 38, had sold his motorbike to invest in the fledgling company. The brothers lived together in Bucharest for two years while building the Paranoid technology. Today, Ofer is chief operating officer of Nyotron and a board member of Gaist Information Security.

At first, the preteen gained clients as a web host and Internet service provider (ISP). He then earned recognition as an “ethical hacker,” hired by financial institutions and ISPs to break into their websites in order to reveal dangerous weak spots.

“That’s what I did for years before starting our own security program,” Gaist tells ISRAEL21c. “Ethical hacking is a game of knowledge and skill. I was not the only one in the field, but my age was a great differentiator. My clients were the biggest Israeli institutions. There was no bank where I didn’t transfer money between accounts.”

Young Nir was so gifted that he began studying computer science at the Technion-Israel Institute of Technology before he was out of grade school. He hosted a radio show and read the news at Radio Kol Chai.

But the classroom was not for him. By the end of 10th grade, he wanted out.

“I had promised my mom I’d finish my degree, but that didn’t happen in the end. I went into business instead,” says Gaist, who now lives in Ramat Gan just north of Tel Aviv. “Of course it wasn’t easy for her to see her son getting farther and farther from the mainstream, but I’m sure she doesn’t regret it now.”

He chalks up his early self-confidence to the naiveté of youth, and comes across as modest, polite and unassuming despite his spectacular success.

This year, Gaist expects to grow Nyotron from 15 to 50 employees, in Israel and in his US office.

“There are hundreds of cyber security companies today. In the last three years, 200 new ones were established, each focused on a specific niche,” he explains. “Nyotron is the most ambitious one because we deal with unknown threats, the biggest problem in cyber security. Most popular solutions are based on previous knowledge, while we protect from threats we do not know a thing about.”

This is a canny, if unconventional, strategy in a world where new viruses are unleashed every single second. No longer are these cyber-attacks coming from mischievous teenagers, but from sophisticated cyber-terror groups and even organized crime networks that can instantly encrypt data and extort payment to release it.

“It’s very easy to develop a new virus that will bypass existing security solutions,” says Gaist. “Today, antivirus companies work harder than the attackers. We will change the ratio, and the hard work will shift to the attacker. We are building up the creativity on the defensive side.”

Engaged to be married in March, Gaist has a passion for cinema (“That’s my one escape from reality”) and doesn’t hold onto dreams for long before realizing them.

“My dreams are mainly professional,” he says. “I think there is going to be a big change in this industry, and I want to be the one who makes it. I believe I am on the right path.”