Dahlia Pelled takes two ordinary rubber bands and stretches one with her fingers. Then she scrunches up the second band and “melts” it into the first until they become one, not more than four inches in front of your eyes.

Though the president of the Israeli Society of Magicians has many other neat tricks up her sleeve, rubber-band sleight of hand is her trademark. Photographs on the walls of her Givatayim office overlooking the Tel Aviv skyline show her doing magic for former US President Bill Clinton, former New York Mayor Rudolph Giuliani, Vice Presidents Joe Biden and Al Gore, and Israeli Prime Ministers Binyamin Netanyahu and Ehud Olmert.

After witnessing Pelled’s slick trick, Biden quipped that he would love to take her along to sensitive meetings in the West Bank.

“I wish with magic we could solve all the problems,” Pelled reflects in an interview with ISRAEL21c. “If people in charge of the world looked at things differently, we’d have a more peaceful world.”

Even if her magic wand cannot make peace, Pelled is doing her part. “I am privileged to have a profession which is always making people happy and smiling in astonishment. It’s lots of fun.”

Magic is Pelled’s professional hobby, not her livelihood. She and her husband, Peli-Hanamer, co-own People & Computers — Israel’s leading publisher, event producer and community club organizer in the high-tech field. Multinational firms such as Google, HP, IBM, Symantec and NetApp pay People & Computers to organize events in Israel, leading to a high profile for the Pelleds.

Born in Geneva, she owes her exotic good looks to her father, an Iraqi Jew, and her mother, a Thailand native who converted to Judaism. Her father always wanted to move to Israel and open a bank, but his high-level contacts in the fledgling state persuaded him to go to Geneva to establish the Swiss-Israel Trade Bank to facilitate payments to secret agents operating in Europe. 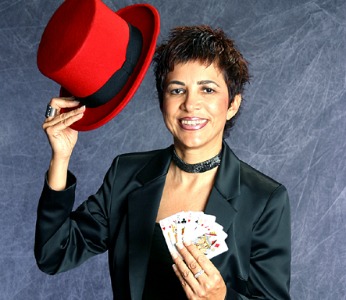 Dahlia Pelled, president of the Israeli Society of Magicians.

Though they attended an international school and spoke English at home, Dahlia and her siblings considered themselves Israeli, and when she was 11 they finally arrived in their homeland. Her father bought his kids magic tricks every time he traveled to New York. Little did he know what that would spark.

Not just an illusion

Pelled performed a couple of times as a teen and then forgot about magic until much later – after serving in the air force, getting married, finishing a degree at Tel Aviv University and giving birth to her firstborn, Dana.

“At age 25, I saw an amateur magician entertain at a talent show at Club Med, and it made me want to go and study magic again,” she says.

She was intrigued by fresh twists to classic acts, like the renowned illusionist David Copperfield’s update of the “cut a woman in half” trick. Copperfield introduced a transparent box in which he “cut” himself in half with a laser.

“The process of magic fascinated me,” Pelled says. “Today the magic world is very much into keeping and appreciating the history of every trick and following its development. You have magicians who invent magic and then you have performers who do it on stage. It’s constantly evolving, and there is a strong link between inventors and performing magicians. They meet at the hundreds of professional conferences held around the world all year round.”

Pelled was a judge at last year’s European competition preceding the tri-yearly International Federation of Magician Societies world magic championships pitting continental champions against each other in several categories. 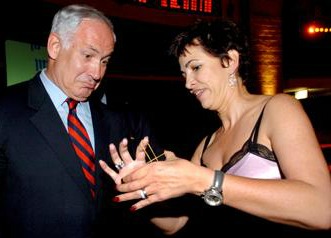 Only female professional magician in Israel

“I am one of the few women magicians in world, and the only one in Israel,” Pelled says. “I do some of the standard tricks differently than the male magicians do, such as the ‘confabulation’ routine usually done with a man’s wallet. I do it with a lady’s cosmetic bag.”

Why aren’t there more female magicians? “Most magicians start at nine or 10, and usually by the age of 12 or 13 girls aren’t interested anymore,” she explains. “Perfecting magic takes a lot of time by yourself practicing, and you cannot divulge your secrets to anyone. Teenage girls want to be with their friends.”

That’s not to say Pelled is in any way antisocial. Between her business, her magic, serving on the board of the Tel Aviv Museum of Art and her volunteer work at nursing homes, she’s a highly visible personality.

She is also a new grandmother, thanks to daughter Dana, an executive with People & Computers. The two other Pelled children are Ben, an MBA student in New York, and Dida, an established musician also studying in New York.