Like the little pullout triangle that supports a picture frame on a table, or the common zipper, there are seemingly trivial inventions in this world whose simplicity has changed our lives in big ways.

Even in the billion-dollar world of high-tech communications and Internet connectivity — where the world’s brightest minds focus on inventions — new zippers and picture-frame supports of the high-tech world are waiting to be invented. Over the last year, the young Israeli company Pops has developed something along this line: a new messaging alert application.

You can download Pops’ alert management solution to any Android phone. It connects SMS messages, emails, Facebook alerts, LinkedIn messages and any other form of messaging you are tuned into on your cell phone, collecting the “incoming message” alert in one place on your screen.

Considering the deluge of information we face daily — and some of us even resort to checking mail and messages while driving or in the restroom — Pops could even make message management more safe and satisfying: With an average of 3,000 alerts coming at you each month, there has to be a better way to manage everything without constantly checking each source of messages.

“We can personalize e-notifications, and very easily we can get in the place where we can be annoying. We are trying to reduce that annoying factor and allow a user to manage and filter out the noise and stay with the notifications he cares about and he feels closest to,” says company co-founder and CEO Yaron Orenstein. “We do that intuitively, so users can mix and match everything.”

Based on user intuition and a simple choices interface, Pops makes use of the blacked-out screen of your cell phone. Whether you are sitting in a movie or a meeting, or you want to flaunt your popularity among a group of friends, you can program Pops to send you the messaging alerts you want, via animations and other rich media. 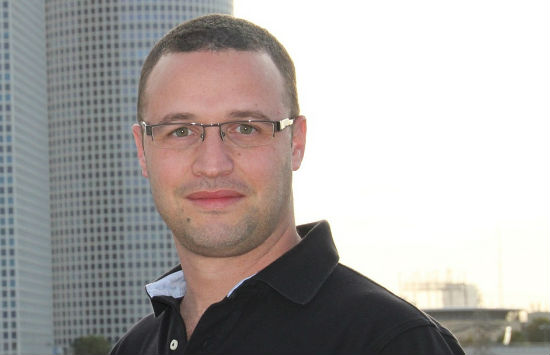 When a message from a desired person or organization comes in, Pops will play a short movie clip, with music, on the screen of your cell phone while announcing the incoming message in a creative way. Half a million people have already downloaded the free application.

Phone screensavers of the future?

Pops managers are currently meeting with all the major record labels in America, and big brands like Coca-Cola, to find ways of adding consumer brands to the messages. There is also talk of having the application pre-installed as part of a cell phone package.

Pops was an idea that Orenstein had circling around his head for a couple years: “My expertise is in consumer products and toolbars, and experienced from that world I thought about what is working best for mass users. I found when someone plugs an email address [notification toolbar into a PC] to get notified of emails, the user never uninstalls it. Then I played with the idea of what can I do with that.”

Orenstein notes that the Israeli company Incredimail made a visual email notification for desktops a decade ago. “I connected these two ideas, and with my partner Nir started brainstorming and narrowed it down. We decided to forget about desktops and brought in another friend. Within 24 hours, we’d made a mockup and decided to go ahead,” says Orenstein, who studied computer science in university, then went on to do an MBA.

He was programming from a very young age, but realized that he was more skilled at business: “I am developing from the age of seven,” he tells ISRAEL21c.

Working on a Sinclair Spectrum at first, even before the Commodore 64, “I am a 100 percent pure development geek. I started developing very early, but this wasn’t my destiny. I realized that there are people much, much smarter than I am. Then I moved to the product development side.”

Founded in 2011, Pops is based in Tel Aviv and currently employs a staff of 10, though Orenstein is actively hiring more personnel.

Will the Pops app be the new screensaver of the future, or the simple invention that anyone could have invented, but didn’t? Orenstein says the development equation isn’t so simple.

“In the end, most consumer products and services are about execution. They are not technology barriers. YouTube doesn’t have a technology barrier. … There is no big deal about it. They did it better. There was an Israeli company called Metacafe doing videos, but YouTube made the right moves. It’s not only marketing, but execution, marketing and having the right product at the right time.”

The time seems right: Pops recently announced an investment of $1.5 million from Mangrove Capital Partners. The company plans to make its money on premium content and licensing fees.

UNCOVER ISRAEL - Get the ISRAEL21c
Weekly Edition free by email
Sign Up Now!
Bring Israel's story to life.
Millions of people around the world rely on us to gain a deeper understanding of Israel. We are the trusted source for original content you won't find anywhere else.
You can make a difference. Donate today to support journalism that brings Israel’s story alive.
SUPPORT ISRAEL21c
Read more on:   Mobile, Technology