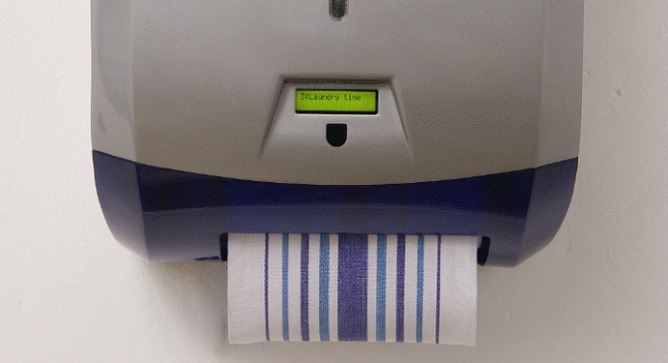 Here’s a multiple-choice question: What is the most hygienic and ecologically responsible way to dry your hands in a public restroom?

(d) an Israeli invention soon to hit the market

The answer is (d), says Avi Kafzan, a Technion-trained mechanical engineer and owner of Manal-Israel Clean Towels, the largest hygiene company in Israel.

About eight years ago, Kafzan founded UltraClean, a company dedicated to designing a “green” hand-drying system effective against the spread of germs while convenient for the consumer and the servicer.

Neither (a), (b) nor (c) meet those criteria, he says. The first is a disaster for the environment and the other two are virtual germ incubators (more on that later).

UltraClean is a patented, non-touch linen towel dispenser with a self-laundering system inside. The gadget won the top 2008 Innovation Award at the ISSA/Interclean international conference in Amsterdam, which is the Academy Awards of the hygiene world.

The judges said they were “truly impressed with the imagination, inventiveness and enterprising spirit shown by the developer of UltraClean. It is exciting to see something which has real potential to make its mark on the washroom service market.”

“The award got us more than 300 inquiries from hygiene companies all over world that want to buy and distribute this product,” Kafzan tells ISRAEL21c. “People are waiting for it in the US, Europe, Russia, Indonesia, India and even Dubai.” Dubai does not have trade relations with Israel and would have to procure UltraClean from a European distributor. Business trumps politics, he says.

Having spent the past two-plus years tweaking the complex product and its service protocols to his satisfaction – with beta testing thanks to one paying customer using 30 of the machines — Kafzan is finally ready to say that UltraClean will be released on the market at the beginning of 2013.

Improvement over paper and jet drying

Kafzan gave ISRAEL21c a demo using a working prototype installed in an employee washroom at his Tel Aviv headquarters.

Wave a hand in front of the machine’s sensor, and a laundered section of towel appears. After you dry your hands, that segment disappears inside, where it’s soaped up to await a pre-programmed hot-wash-and-dry cycle that will kick in at the end of the workday. Using heated tap water and internal brushes and detergent cartridges, the system can be customized for each site’s needs, including the length of the towel, what time to start laundering and how heavy-duty the cleaning and sanitizing must be.

“If it’s installed in a mechanic garage, where people have very dirty hands, you could increase the amount of detergent and the temperature,” Kafzan explains.

He got the idea for the product while traveling the world seeking distributors for FreshCup, a countertop drinking-glass washer he invented about 15 years ago to discourage the use of disposable cups.

“I was in shock at the huge amount of paper — 70 percent of the space in the warehouse is taken up with paper, though this is only a small portion of the business,” says Kafzan.

The volume of paper manufactured and thrown away is wasteful, and hauling it to and from customers eats up energy and causes pollution.
Less obvious is the drawback to jet dryers, which are popular in high-usage sites such as airport restrooms.

“These units collect the germs from the air and spray them onto your hands,” Kafzan claims. “The amount of germs that stays is three times more than before you washed your hands. It’s the mechanical work of rubbing your hands that removes the germs. With paper and towel, you can remove 95 percent of the germs.”

A recent study conducted by the University of Westminster also pointed out that because jet dryers are noisy and take 15 or 20 seconds, people prefer to leave the bathroom with wet or damp hands, which become magnets for bacteria on door handles.

Kafzan – who is also the technology consultant for Israeli mineral-water marketing company Eden Springs, which holds the main shares in the parent company of FreshCup — figured that if he succeeded in shrinking the dishwasher he could do the same for hand drying. 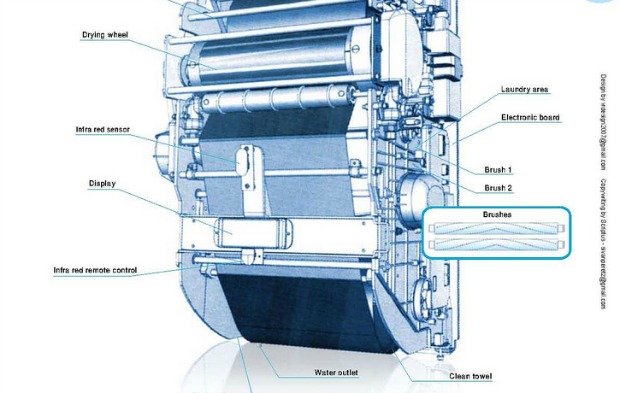 The inside workings of the complex hand-dryer.

With partners Ben Segal and Rafi Babiacki, Kafzan has invested $2 million in UltraClean, mostly from the family’s profits from Manal (managed by his son, Ron) and lavatory furnishings maker Ambin (managed by his wife, Tzipi). He hired consultants in engineering, design and software, and engaged a lab to develop and test the product, which uses 10 to 12 liters of water and environmentally friendly detergent.

He explains that distributors would get a week of training to install and service the machines they buy, replacing towel, cartridges and cleaning brushes yearly.

“One and a half years after the first investment, the distributor will save more than 50 percent of costs,” predicts Kafzan. “If you buy 300 units, you can charge $40 per month per machine, so at the end you’d see an income of $12,000 per unit, with only one person needed to operate that system.”

Manufacturing is expected to be mainly in China, with some parts and assembly done in Israel.

UNCOVER ISRAEL - Get the ISRAEL21c
Weekly Edition free by email
Sign Up Now!
Bring Israel's story to life.
Millions of people around the world rely on us to gain a deeper understanding of Israel. We are the trusted source for original content you won't find anywhere else.
You can make a difference. Donate today to support journalism that brings Israel’s story alive.
SUPPORT ISRAEL21c
Read more on:   UltraClean, Environment, Featured, Eco-Living