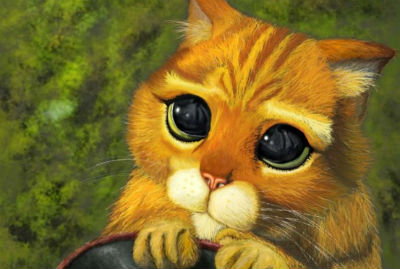 If Puss in boots was a politician, maybe he could bring peace.

The swashbuckling cartoon cat, Puss in Boots, sure knows how to put on a good baby face when he needs to. His sad, wide-eyed look helped him out of tight spots in all four Shrek movies. Puss in Boots simply stares foes down in his cute and innocent way, softening his enemies’ hearts.

That crazy cat’s approach may also work for brokering peace between humans, according to a new study from the Hebrew University in Jerusalem. Baby-faced diplomats and politicians are more likely to be trusted. Their facial features give them “an aura of sincerity, openness and receptiveness,” the researchers report.

In the study led by Ifat Moaz, head of the Smart Family Institute of Communications at the Hebrew University, researchers attempted to see how minor modifications in the faces of politicians affected a subject’s overall judgment of them.

The virtual faces used in the study were produced using a process of subtly altering their features to make them look more babyish. Identical faces, some with the baby-face effects and some without, were shown to subjects.

Put in the context of the Israeli-Palestinian conflict, Maoz found that baby-faced candidates’ offers of peace had a greater chance of winning support than those from leaders who had more mature faces.

The findings are described in a report, “The Face of the Enemy: The Effect of Press-reported Visual Information Regarding the Facial Features of Opponent-politicians on Support for Peace.”

It’s in the lips and eyes

In the study, Jewish-Israeli subjects were shown a fictional news clip reporting on a peace proposal by a fictional Palestinian leader. By increasing the size of the lips and eyes of the “leaders” by 15 percent, the faces of these fictionalized characters were in essence “baby faced.”

Two groups viewed the pictures. One was shown the modified face, one group the unmodified version. They were all asked to judge the peace offer being presented.

As part of the evaluation, the respondents were asked to rate the level of trustworthiness of each “leader.” Statistically, the leaders with the baby-faced picture were more likely to be considered trustworthy, and their offers accepted, Maoz found.

“People generally associate a baby face with attributes of honesty, openness and acceptance and once you trust your adversary, you have a greater willingness to reach a compromise,” Maoz explained.

Other studies have demonstrated that as few as 100 milliseconds of exposure to a new face can evoke in the viewer feelings of warmth, cooperation and trust — or the opposite.

What defines a baby face?

Maoz identifies baby-faced features in people who have proportionate and large round eyes, a rounded rather than pointy chin and thicker lips. These features tend to evoke feelings of trustworthiness over mature-looking people with smaller eyes, square jaws and thin lips.

In another aspect of the study, Maoz looked at how much people who are resistant to change could be influenced or won over by a baby-faced image. She found that the people who felt negatively toward the peace process were significantly more likely to respond to a baby face over subjects who were more dovish about the peace process.

“People tend to prefer baby-faced politicians as long they represent the opposing side, while on their own side they prefer representatives who look like they know how to stand their ground,” Maoz said.

This is the first study of its kind that systematically looks at the facial features of opponents and how these features may affect public opinion.

The implications are huge, especially in a time when Photoshop can be used to enhance or modify images of politicians.

Though this study seems to contradict 2005 research from Princeton University, which found baby-faced politicians were less likely to win an election, that may be because a baby face may also communicate a lack of assertiveness, Maoz explained.

Overall, the study sheds more light on the importance of putting one’s best face forward in politics. Even barely detectable changes in the faces were enough to elicit a change in judgment.