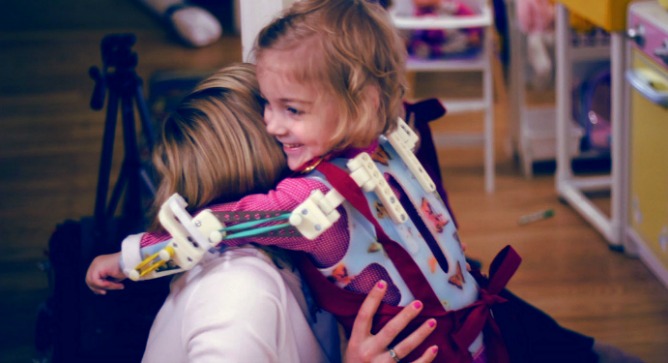 In his February 12 State of the Union address, US President Barack Obama announced that “3D printing … has the potential to revolutionize the way we make almost everything.” It’s a huge claim, but one Israeli-American company is already leading the way with a series of quite extraordinary products that are most definitely transforming our lives.

In the same way that your computer’s printer deposits ink onto paper to form words and pictures, three-dimensional printers put plastics and resins on all sorts of materials to make anything from clothing to advanced medical devices.

“It does seem like magic,” says Joe Hiemenz, spokesman for 3D printer manufacturer Stratasys, which has dual headquarters in Minneapolis and Rehovot, Israel.

Indeed it was magical when preschooler Emma Lavelle was able to use her arms for the first time with the help of a custom-designed robotic exoskeleton made with a Stratasys Dimension 3D printer – so magical that the device has been nicknamed “Magic Arms.”

The little girl has a congenital disorder that compromises her joint mobility and muscles. Researchers at the Nemours/Alfred I. duPont Hospital for Children in Philadelphia knew of a metal exoskeleton for adults suffering similar conditions, but it was too big and heavy for a child.

The Stratasys printer enabled them to fashion a lightweight alternative that has been nominated for the Designs of the Year 2013 awards by London’s Design Museum.

“It works identical to an inkjet printer — forming a product layer by layer, but making it from some kind of plastic or resin,” Hiemenz tells ISRAEL21c.

“A head puts down the material in very thin layers following a tool path created by a CAD [computer-assisted design] file, so whatever you have designed through CAD is going to come out. In the case of Magic Arm, it was plastic coming out of the printer in molten form.” This is the same sturdy plastic used in LEGO bricks. 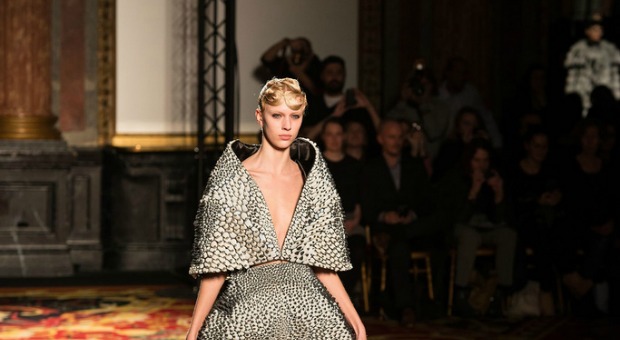 This “tech couture” dress was printed out on an Israeli-made 3D printer.

At Paris Fashion Week in January, Dutch designer Iris van Herpen unveiled two ensembles from her new haute couture collection that were made with an Objet Connex multi-material 3D printer.

The designer had sought out Oxman after seeing her 3D-printed “Imaginary Beings: Mythologies of the Not Yet” display last spring in Paris.

“The van Herpen skirt and dress have a combination of rigid and flexible parts made of three different material properties. You could not make this dress without the Connex technology. It allows you to really attempt new things in a unique way.”

Oxman said, “The incredible possibilities afforded by these new technologies allowed us to reinterpret the tradition of couture as ‘tech couture,’ where delicate handmade embroidery and needlework is replaced by code.”

Van Herpen told Fashion Week reporters that she believes “it will only be a matter of time before we see the clothing we wear today produced with this technology, and because it’s such a different way of manufacturing, adding layer-by-layer, it will be a great source of inspiration for new ideas.”

Those new ideas are not limited to fashion or even to medical and dental devices.

“This industry started about 25 years ago to make prototypes mainly for the aerospace and automobile industries, and other high-end applications that have deep pockets to explore new technologies,” says Hiemenz. “They’re not prototypes anymore; they’re real products now.”

The medical applications are among the most dazzling, he adds. The 3D printing process has been used to make custom orthotics for disabled American veterans, a better device to treat clubbed feet and even a sophisticated heart surgery tool. The process allows for creating complex interior passages inside devices to carry air or liquids.

Hiemenz says that the news about Magic Arms has resulted in a flood of inquiries from parents hoping that the printed exoskeleton could help their child, too. A foundation is being set up for this purpose at the initiative of Eric Jenson, who produced a video showing Emma and her Magic Arms. The goal is to make 50 of these exoskeletons per month, perhaps giving them free to disabled children in developing nations.

UNCOVER ISRAEL - Get the ISRAEL21c
Weekly Edition free by email
Sign Up Now!
Bring Israel's story to life.
Millions of people around the world rely on us to gain a deeper understanding of Israel. We are the trusted source for original content you won't find anywhere else.
You can make a difference. Donate today to support journalism that brings Israel’s story alive.
SUPPORT ISRAEL21c
Read more on:   Health, Technology, Objet, Stratasys