Israel’s Qwilt offers a cost-effective, easy-to-implement solution to help ISPs thin out the traffic and deliver a better experience to customers. 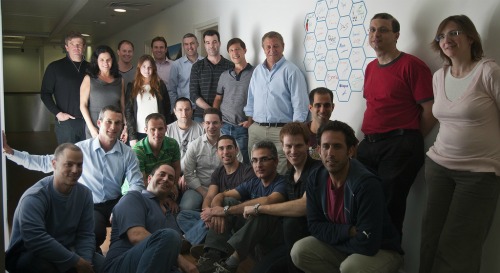 Qwilt’s Israel team, with CEO Alon Maor in the back row center.

The Internet has gotten pretty crowded with all the video content passing through it. Qwilt is an Israeli startup that has built a cost-effective, easy-to-implement solution to help Internet service providers (ISPs) thin out the traffic without forcing them to buy expensive equipment to expand bandwidth.

Sooner or later, streaming video is going to replace cable TV, as broadcasters choose to stream their programs via the Internet in order to reach more customers more easily. But not more quickly, it seems. All that video, with its weighty files, is gunking up the works on networks not designed for multi-gigabyte file streaming.

With video now accounting for 40 percent of all Internet traffic – and that number is set to shoot skywards in the coming years – ISPs are facing a data crunch crisis. They’re trying to squeeze every ounce of bandwidth out of their infrastructure by outsourcing content delivery, charging premium rates for streaming, caching files and limiting download speeds for services such as peer-to-peer file sharing.

But all those solutions are band-aids that aren’t popular with customers. In the end, ISPs really have no choice but to buy new servers and build more sophisticated delivery systems. Or they can turn to Qwilt.

CEO Alon Maor tells ISRAEL21c that ISPs can have it all – speed and reasonable cost – using Qwilt’s innovative “edge caching” system for transparent video delivery. “This refers to the ability of the ISP network to automatically detect the most popular online video content across all sites and consequently store and deliver this content from within the network itself.”

The point is to get the most popular content close to the customer, using a system developed by Qwilt over two years using commodity (aka cheap) servers.

“The fundamental concept of transparent video delivery is to prevent content to be transmitted redundantly across the network multiple times and to position the content at the closest location to the subscriber edge. Such architecture prevents the need to scale your network exponentially as the demand for online video grows,” says Maor.

Nearly all other solutions to reduce bandwidth-hogging by video streams entails some sort of compression. Qwilt can do that too, but even without compression, the Israeli system will still spare around 60% of the bandwidth consumed by video, says Maor. “The solution supports all types of video including HD and SD as well.”

Maor and his 30-person staff are networking veterans. Maor worked at Cisco Systems for five years, and was part of one of the first teams dealing with network intelligence when he worked for networking infrastructure firm P-Cube prior to its acquisition by Cisco. So he knows the ins and outs of a network, and especially how to optimize it to stream video in the most effective manner.

“We leverage leading-edge technologies originally designed for the enterprise market that have matured in the last couple of years with the latest technology and provide much more scalability than the competition, so that the system can adapt to a network automatically,” he says.

Qwilt’s system costs ISPs much less than building new bandwidth infrastructure. “We put everything in one box, based on off-the-shelf hardware, so ISPs can deploy as many as they need to at low cost,” Maor says. “It’s a one-stop solution for video streaming.”

In one of the biggest startup success stories of 2011, Qwilt emerged from stealth mode in October with $24 million in the bank, raised in two rounds from Accel Partners, Redpoint Ventures and CP Lantern. Its R&D center is in Hod Hasharon and it has set up sales offices in London and in Redwood City, California.

“There hasn’t been a substantial investment in video infrastructure for over a decade, and the signs of age are showing,” says Maor. “We believe our solution will go a long way to modernizing that infrastructure.”

UNCOVER ISRAEL - Get the ISRAEL21c
Weekly Edition free by email
Sign Up Now!
Bring Israel's story to life.
Millions of people around the world rely on us to gain a deeper understanding of Israel. We are the trusted source for original content you won't find anywhere else.
You can make a difference. Donate today to support journalism that brings Israel’s story alive.
SUPPORT ISRAEL21c
Read more on:   Internet, video streaming, Technology