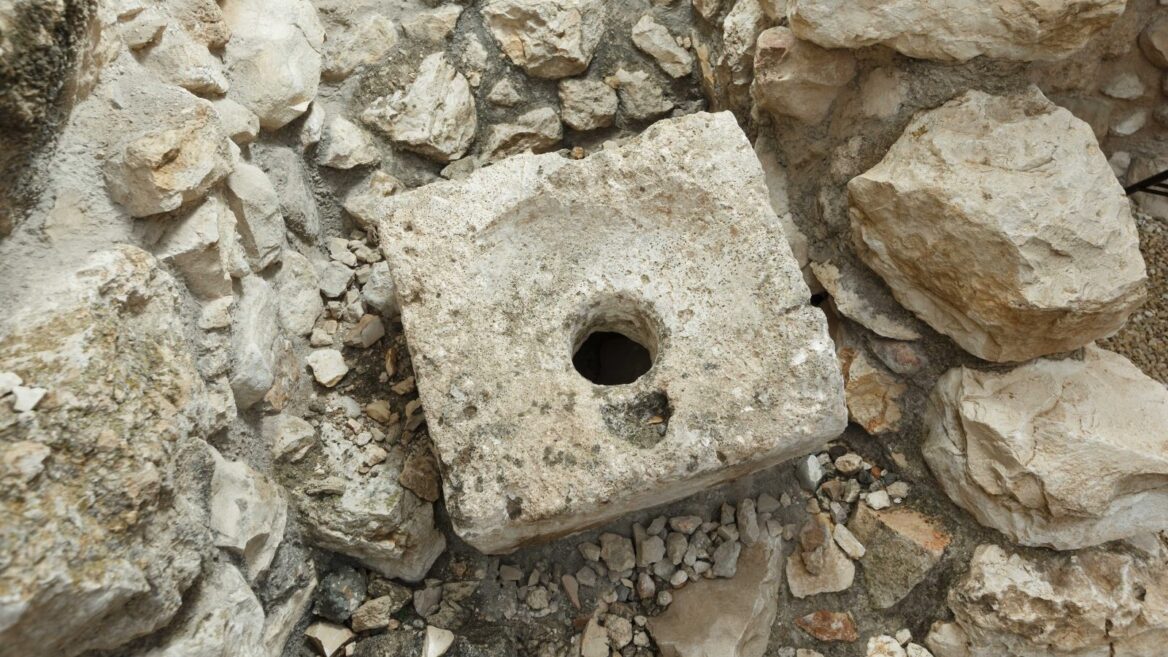 An Iron Age toilet stone uncovered in the City of David in Jerusalem looks remarkably similar to modern-day loos. Photo by Eliyahu Yanai/City of David

On Thursday, November 19, we’ll all be celebrating World Toilet Day, established by the United Nations to raise awareness of sanitation challenges across the globe.

To mark the special event, we looked at the sanitary situation in the Land of Israel these past couple of millennia and learned more about the best ancient toilets uncovered by archaeologists. What can we say — it certainly left us feeling flushed.

Magnificent remains of toilets (pictured above) were found in the archaeological site of Ir David (City of David) in Jerusalem, and apparently it’s no coincidence.

“Where do we find toilets? We find toilets in Ir David, which was the capital of the Kingdom of Judea, and obviously the wealthy population always lives in the capital,” explains archaeologist Saar Ganor from the Israel Antiquities Authority.

“It’s a phenomenon that belongs to the upper classes,” he says.

“Simple people either created toilets from materials such as wood, whose remains disappeared, or they used other ways, such as digging a hole in the ground,” he adds.

The loos that remained are made of stone and look remarkably like the ones in your home. But these toilets didn’t flush, of course.

“In these time periods, we in fact have a few examples of stones whose outline is usually square and they’re 30 to 40 centimeters tall, a sort of large cube with a hole in its center that goes all the way down. Sometimes on its front there’s a conduit that you can imagine what it was used for, or alternatively another hole. In most of them there’s this sort of chiseling in the upper part of the seat; it’s really a seat that you can sit on with a hole in the middle,” says Ganor.

“The human race obviously hasn’t changed, and has always defecated in the same way,” he notes. 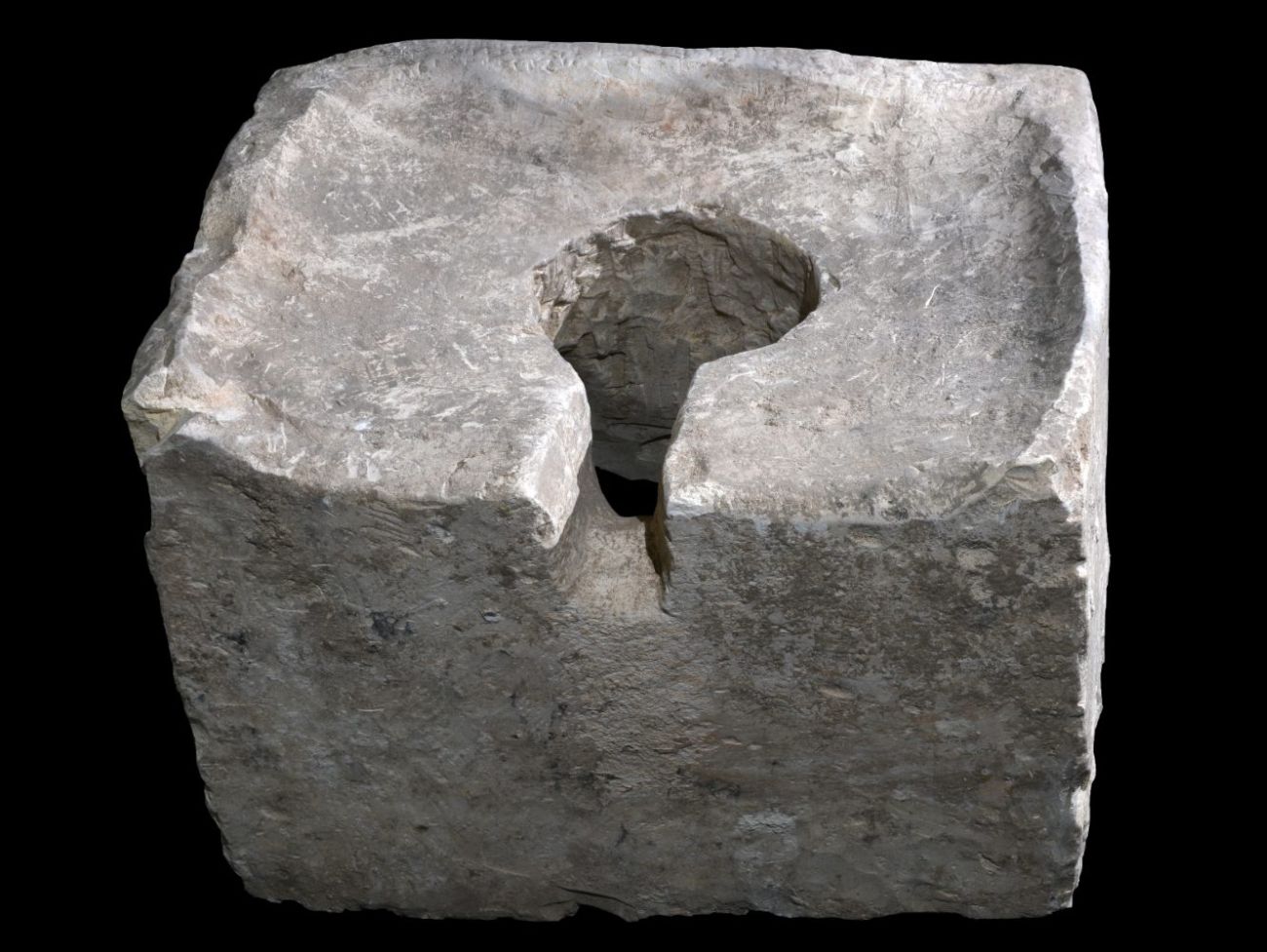 A stone toilet found inside the Holy of Holies of Lachish’s city-gate temple. Photo by Clara Amit/Israel Antiquities Authority

During the First Temple period, the city of Lachish in the Judean foothills was second only to the capital, Jerusalem. And as such, it had a wealthy and urbane population that used stone loos.

“A rather large stone was found inside the city gate of Tel Lachish, something along the lines of half a meter by half a meter, and 40 centimeters high. It too has seat-shaped chiseling on the top part and a conduit in front,” Ganor says.

To make things even more interesting, the stone was found inside the city gate’s temple. In its very Holy of Holies. But how did an object as impure as a toilet find its way into such sanctity?

According to Ganor, it has to do with religious and political reform. When King Hezekiah came to the throne, he made Jerusalem the center of things, cancelling all temples and worship outside of the capital. Including the one in Lachish.

“Apparently, the way to cancel the city-gate temple was to place a toilet in the Holy of Holies so that it wouldn’t be used,” he explains.

It seems the horrified locals didn’t even contemplate using the brand-new loo: soil tests failed to pick up the remains of stool bacteria like the ones found around toilets in Ir David.

“They sealed up the site and it waited for 2,700 years for us to dig it up,” Ganor concludes. 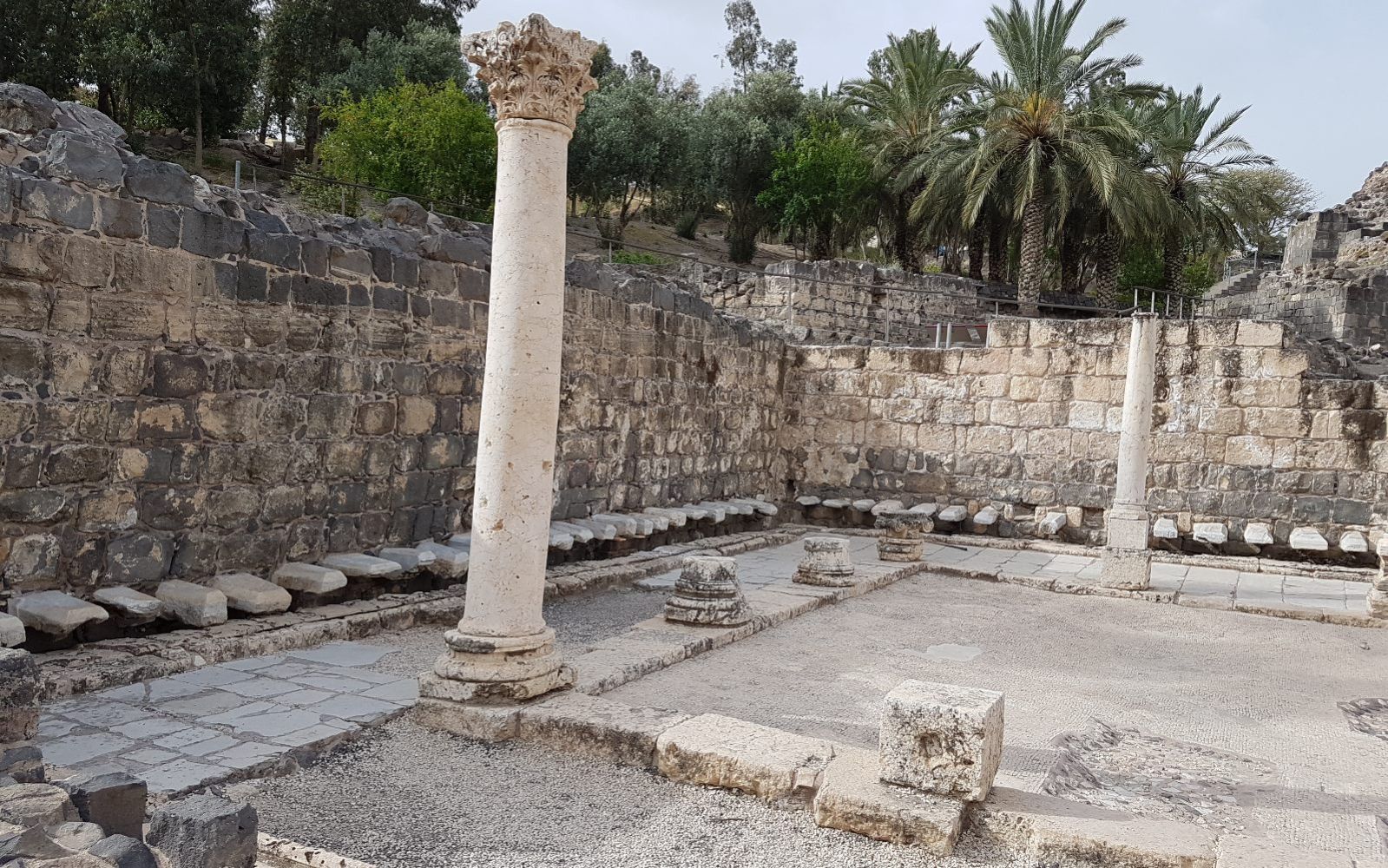 While latrines hooked up to a sanitation system were very much a high-class item in the Roman period, regular people could find them in public loos.

The biggest ones to have been discovered in Israel can be found in Beit She’an, adjacent to large public baths. And when we say big, we mean it – they comfortably seated dozens of people.

“Generally speaking, toilets were a room, usually not a small one, that had a deep channel running along its walls, which was a flushing channel that carried out all the stool and everything that was inside. On top of it they put seats; sometimes these were regular stone seats but in quite a number of cases they were marble seats – something that looks like today’s toilet seats, with a nice and orderly hole for bottoms,” says IAA archaeologist Peter Gendelman.

“In addition, there were also upper canals that were more for cleansing,” he says. In pre-toilet paper times, these loo-goers dipped a sponge tied to a stick in the freshwater to clean their behinds.

“The public toilets, and also private ones, needed to be located where there was 24/7 water flow,” he says. “It required a connection to both water systems and public drainage systems.” 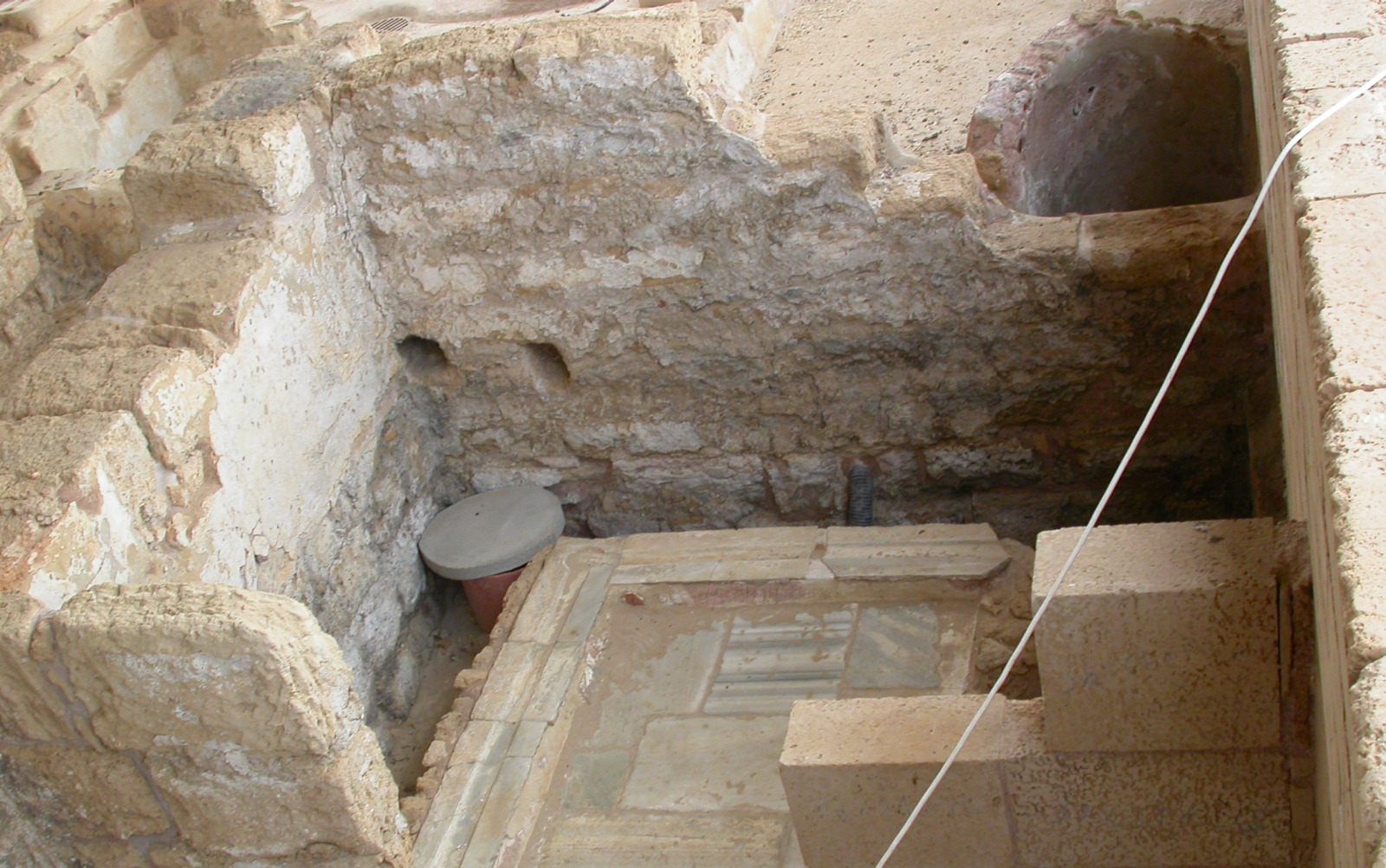 A few toilets from Roman-era private homes have also been uncovered, Gendelman says, most notably in palaces and public facilities in the city of Caesarea. One even had marble columns and plastered walls, but it really doesn’t represent the lifestyle of the general population.

“Most people probably used chamber pots, or people who lived in rural areas must have done it outside somewhere,” he explains.

People’s pee did not go to waste. It was collected for tanners, who used the ammonia found in the urine to remove hair from the hides – a practice that carried on all the way to the 19th century.

Gendelman adds that there are sources that describe how in ancient Rome, noisy carts would pass by in the early morning to collect urine, in a manner not dissimilar to modern-day garbage trucks.

“If it took place in the empire’s capital then it must have also happened elsewhere,” he concludes, leading us to conjure up images of urine carts passing through the streets of Caesarea. 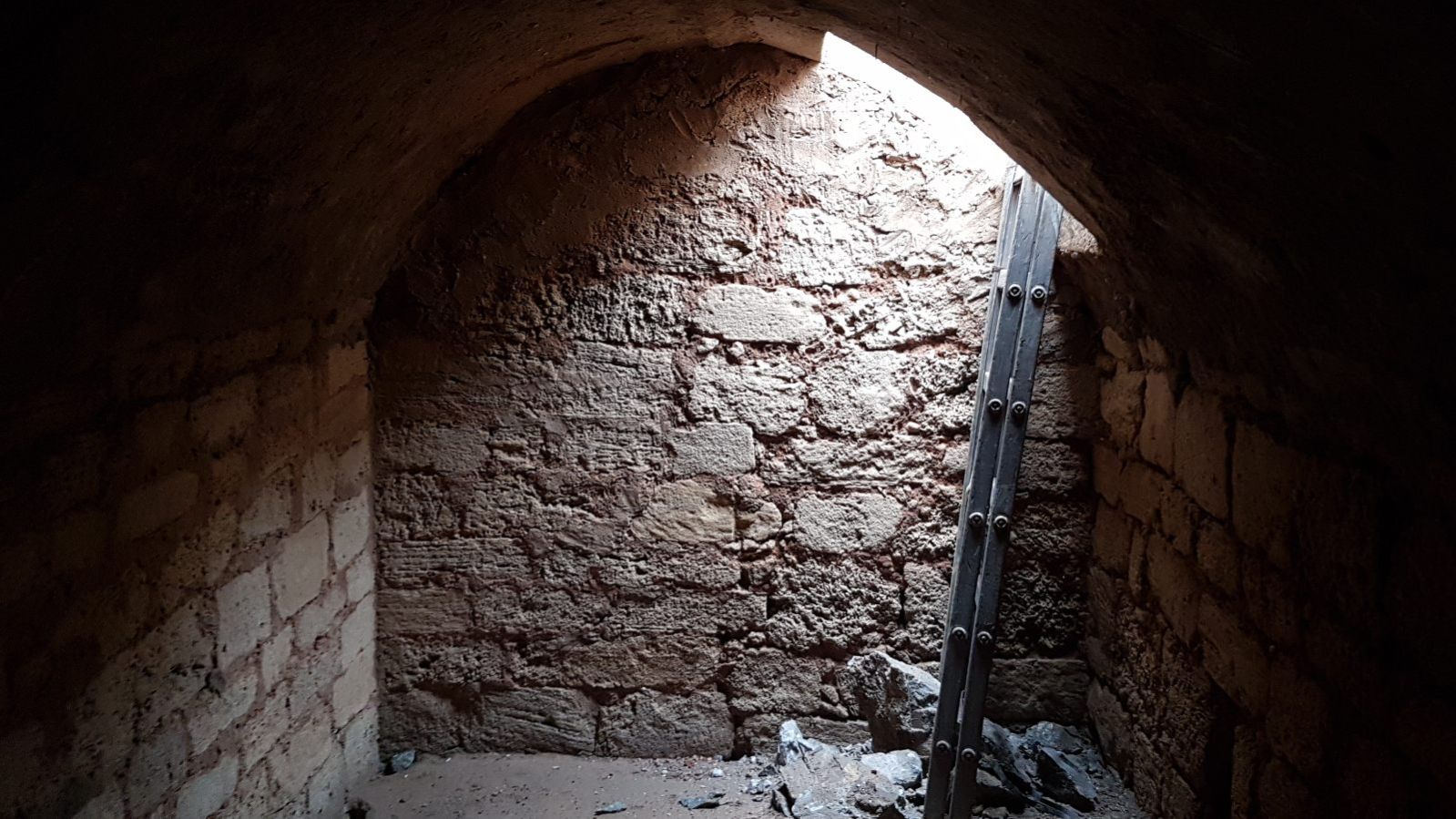 The inside of a septic tank introduced to Jaffa’s new neighborhoods in the late 19th century. Photo by Yoav Arbel/Israel Antiquities Authority

When it comes to the late 19th or early 20th centuries in Ottoman Palestine, archaeological finds are more difficult to, well, find. Many buildings from that time period have been renovated and are part of contemporary ones.

And yet a few examples of old-school plumbing exist, particularly in Jaffa.

“Generally, for most people in the Land of Israel at the time, toilets were a hole outside the home, in the backyard, with a hut on top of it,” explains Yoav Arbel, an archaeologist with the IAA. “You needed to dig out the hole again or clean it every time.”

This was also the case in Jaffa, were outhouses were the standard.

“There were people who would just throw it out in the street, just like in the Middle Ages,” he adds.
“These were acceptable things and accordingly there were diseases.”

One particularly bad cholera epidemic struck the city in 1902. The official death toll stood at 272, but according to Arbel around 1,000 out of the city’s 20,000 residents must have died from the disease, which is transmitted through the secretions of an ill person.

“This gives you an example of the situation that was created in Jaffa due to the fact that the toilets in Jaffa were in such a catastrophic and primitive state,” he says.

Some people dumped their waste in the sea, and some wealthy homes with private toilets even had sewage systems that carried it along a tunnel that crossed the street all the way to the Mediterranean.

In the late 19thcentury and early 20th century, homes in the less densely populated new Jaffa neighborhoods made use of then-modern septic tanks.

“These tanks were underground in the street, but the draining came from inside the house itself, like it does today,” Arbel explains. “These were built out of stone and had an arched roof, and they’d collect the sewage from inside the homes, which would collect on the ground and then become absorbed. They hardly needed to be cleaned.”

He says the Ottoman Turks carried out many changes because of their understanding of pandemics. “There was an understanding, but to start digging up the whole city isn’t simple, not nowadays and most certainly not back then.” 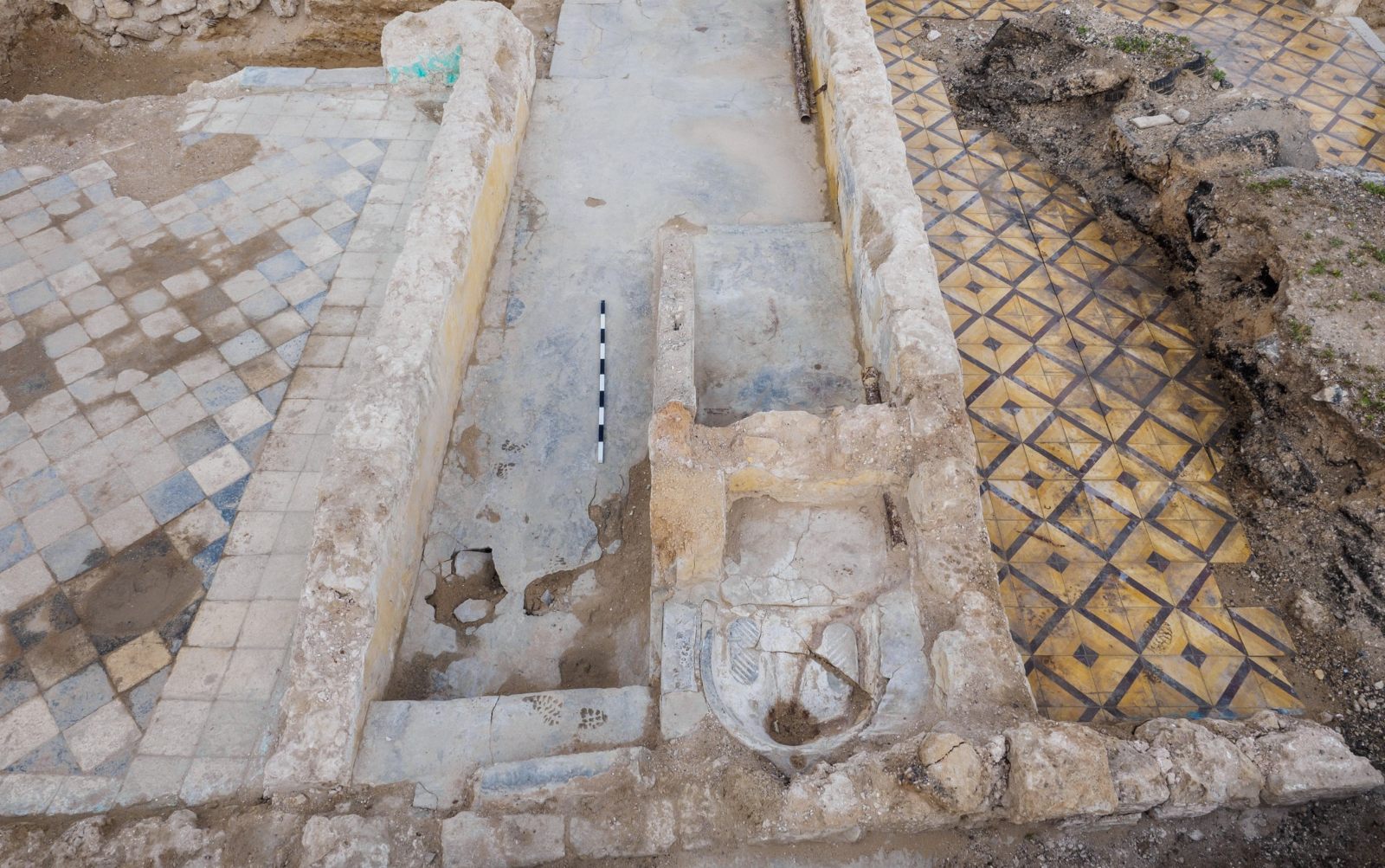 A bathroom in a beautifully tiled house from the early 20th century in southern Jaffa. Photo by Yoav Arbel/Israel Antiquities Authority

When the British took over Palestine from the Turks in 1917, they brought with them new systems.

“During the Mandate everything changed, and we find sewage systems, some of which are still in use today,” Arbel says.

“In very beautiful houses from the early 20th century in southern Jaffa we found houses with colorful tiles,” he notes. “These are people with resources; each such house had a toilet system.”