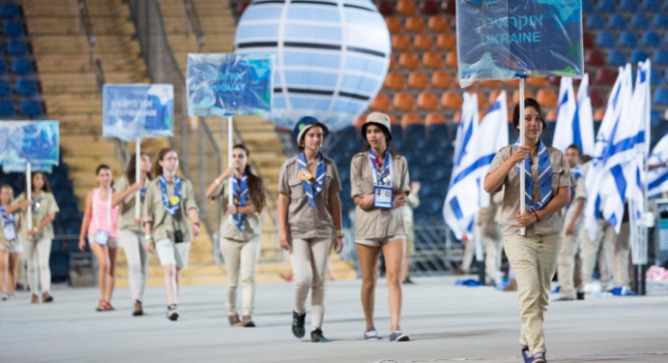 The rehearsal ceremony on July 16 for the 19th Maccabiah Games at the Teddy stadium in Jerusalem. Photo by Yonatan Sindel/Flash90

Olympic gymnast Aly Raisman and NY Knicks basketball star Amar’e Stoudemire are among the 9,000 athletes, coaches and other support staff who have converged on Israel from 78 countries for the 19th Maccabiah Games, kicking off at Jerusalem’s Teddy Stadium on July 18 and running through July 30.

The Maccabiah is the third-largest sporting event in the world – and the largest one this year. It is open to Jewish athletes from across the globe, competing in 42 individual and team sports.

The sporting competition takes place in a variety of athletic venues across Israel every four years. In between, dozens of individual countries have their own competitions sponsored by the Maccabi World Union, a non-profit, apolitical organization using sports, educational, social and cultural activities to stress the centrality of Israel in modern Jewish life.

Maccabiah Chairman Amir Peled tells ISRAEL21c that approximately 70 percent of the 9,000 visitors this summer – who include about 8,100 athletes — are in Israel for the first time.

“I want them to have the best summer of their life — two weeks to experience, a lifetime to remember,” says Peled.

“They are here for sports and I wish all of them success,” he continues. “But they are also here for Jewish identity and education and Zionism, so I hope they leave here with a deep love of Israel. And if the outcome will be that they come again, to study or live, or even if they just enjoy following Israeli sports teams, I will be more than happy.”

Athletics provides a winning ticket for many first-time participants.

“We at Maccabi have an amazing hook, and that’s sports,” Maccabi USA President Ron Carner tells ISRAEL21c. Carner brought over a record-breaking American delegation of 1,117 divided into 105 teams – more than twice the size of the US Olympic delegation to London last summer.

“You can do things through sports that you cannot do through any other medium, at this kind of volume,” Carner notes. 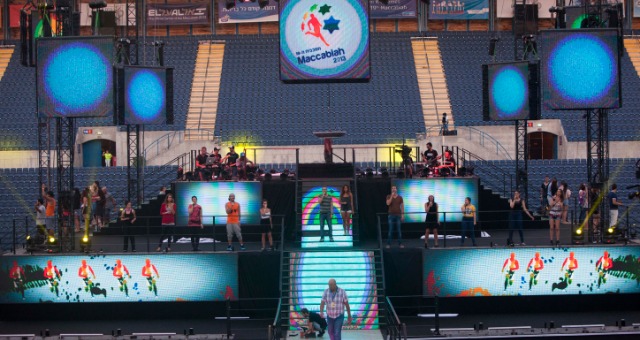 Teddy is ready for the games. Photo by Yonatan Sindel/Flash90

Equestrian was added this year for the first time (the Israeli team is captained by show jumper Danielle Goldstein), along with the Maccabi Man-Woman Endurance Challenge encompassing up to four separate events. Competitive ice hockey, played on Israel’s Olympic-size rink in northern Metullah, returns to the “Jewish Olympics” this summer following a 15-year hiatus, made possible by donations from six National Hockey League team owners.

Junior games are open to any qualifying athlete aged 15-18. Masters are divided into different age categories, and the Open division is generally unlimited in age, intended for the best athletes from each delegation. 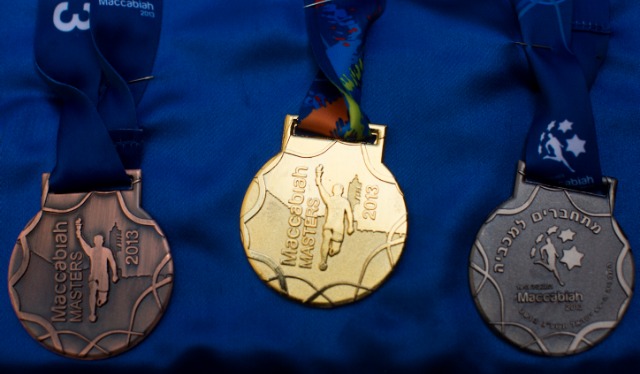 Who will win these medals? Photo by Yonatan Sindel/Flash90

“While they are here, we introduce them to Israel and the culture of the country, and to other Jews from around the world, and it’s amazing to them,” says Carner. “They’re not aware of the high level of athleticism here.”

In the days before the Masters competitors arrived, Carner and his crew took their 900 Open and Junior athletes on a six-day Israel Connect tour, hitting such must-see areas as Tel Aviv-Jaffa, Jerusalem, Masada and the Dead Sea.

They got their start at Maccabiah

The Maccabiah actually predates the state of Israel. The first games were held in 1932 under the British Mandate of Palestine. Tel Aviv Mayor Meir Dizengoff rode through the streets of Tel Aviv on a white horse to herald the opening ceremony, which also featured the release of 120 carrier pigeons. Almost 400 athletes from 18 countries participated, including more than 60 athletes from Arab countries such as Syria and Egypt.

Peled said he tried unsuccessfully to get an Iranian Jewish team together this year, but his consolation is that the 2013 games include athletes from 20 countries that never participated before, such as Cuba.

“There is no Jewish-Zionist event in the world that comes close to doing what the Maccabiah does — reaching everyone, those who belong to a synagogue and those who don’t attend at all,” said Peled.

Stoudemire, who has been to Israel before to explore his Jewish roots, is participating as the coach for the Canadian men’s basketball team. “Even though these guys are not NBA players, they’re still NBA fans and they’re tying to improve the game of basketball,” he said. “That’s where my expertise comes into play, I can teach them the game.”