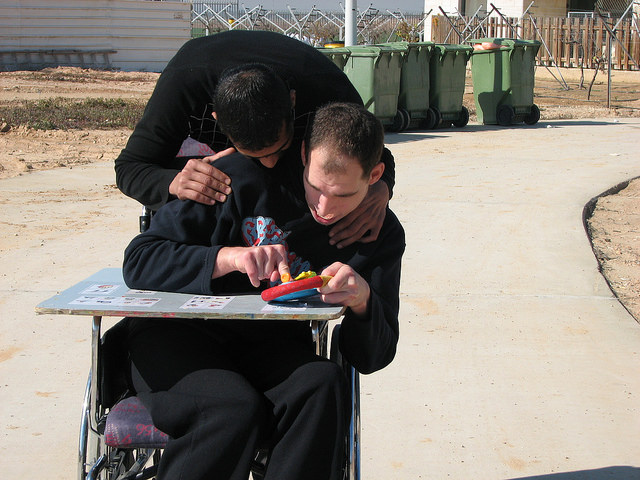 Each prisoner volunteer chooses an ALEH resident to work with on a long-term basis.

Pairing up convicted felons and helpless residents of ALEH Negev-Nahalat Eran, a rehabilitative village for 138 severely disabled Israelis, gives both populations a respite from their jail three times a week.

Every Sunday, Monday and Tuesday, 26 prisoners from six southern jails shed their inmate garb and board a bus for ALEH-Negev. Volunteer coordinator Erez Naim meets them for a briefing before they fan out to work with more than 30 residents of all ages. Upon returning, each one discusses the experience with his social worker.

Whether the prisoners spend their time in the vocational training center, walking in the music garden or petting zoo, or helping dependent residents in the respiratory area, the exposure to ALEH residents, staff and volunteers motivates the prisoners to recalibrate their moral compasses and refocus outward.

“If you ask the prisoners what the volunteering means to them, they always say two things: First, ‘Before I came to this village I was never interested in volunteering.’ Second, ‘I’m in jail because I stole or did something else bad. Here I feel the residents are in a kind of jail because their body is so limited, and they stay in this jail all their life despite having done nothing wrong. I see now that I’m responsible for my life and I can make it better because I’m not helpless.’

“This is a wonderful way to rehabilitate prisoners,” says ALEH-Negev CEO Masada Sekely.

She credits corrections officer Mazal Yifrach with initiating this unique program, which won the Israel Prison Service an Offender Management and Reintegration Award in 2011 from the International Corrections and Prisons Association.

“Doron wasn’t sure it was a good idea, but after he spoke with the prisoners he decided to try it,” says Sekely. “We started with one prisoner and one resident, and it was very wonderful. Over the years we have made the program more and more professional as we learn how to deal with them and they learn how to deal with our residents.”

The program is so successful that it has recently been adopted by the ALEH Moriah-Gedera facility for children.

The prisoners shed their uniforms before arriving at ALEH to volunteer.

Once or twice a year, administrators of the ALEH village go to area jails to speak about the volunteering opportunity. Prison social workers decide which applicants will be accepted.

“There is a long line of people who want to participate,” says Sekely. “Whenever they come to the village, they are not in jail uniform and we don’t call them prisoners; we call them volunteers. So they have a few hours where they are equal in society and feel like human beings. They seem very happy here.”

Though the inmates don’t stick out for their attire, they are distinctive among most of ALEH-Negev’s other 180 volunteers because they are male. “Most of our volunteers are female, as is our staff,” says Sekely.

Accordingly, the prisoners are assigned to male residents of young adult age or older. They are not permitted to work with female residents, children or in the hydrotherapy pool. Aside from those restrictions, they may choose the kind of volunteering they wish to do and with whom.

“We need many hands here,” says Sekely. “They work with residents in the gardens and in the occupational therapy center, and help the staff move residents from one area to another.”

Many of ALEH-Negev’s residents have a lot of energy to burn, and the prisoner volunteers take them outside for long walks around the complex. Sekely relates that one prisoner discovered that the man with whom he was walking cannot speak but likes to whistle.

“So he started whistling to him and the resident would answer. This became a mode of communication; you’d hear whistling all over the village.”

Another prisoner is paired with a wheelchair-bound resident who shares his interest in cars. “They ‘talk’ to one another through pictures and symbols about cars,” says Sekely.

“We have a resident suffering also from elephantiasis — his face is like a mask, and it’s hard to look at him if you’re not used to him. One of the prisoners chose him and walks with him. When he has to leave, he hugs him. That touch is so important. He is treating him as a human being, not a monster. Sometimes I feel the prisoners prefer to choose the more challenged residents, those with the worst abnormalities.”

Almog – who founded the facility for continuing care of his son, Eran, now deceased — believes this program exemplifies the positive impact that the disabled community can have on society at large. “Assisting these pure souls gives the prisoners an opportunity to make a small tikkun [rectification] for their crime.”

Although some Israeli prisons provide one-time volunteering opportunities for inmates, nowhere else can you find a long-running program in which the convicts build relationships with those they assist.

“Our residents benefit, the prisoners benefit, and also Israeli society benefits because maybe when they leave jail they will be better citizens,” Sekely says.

ALEH is Israel’s largest organization caring for those with complex physical and cognitive disabilities. Previously, ISRAEL21c reported on a group of police officers voluntarily pairing up with ALEH-Jerusalem residents in the Jerusalem Marathon last March.