When a broken pelvis put Israeli farmer and inventor Gilad Woolf into a wheelchair for a few weeks, the bumpy ride wreaked havoc on his back, and he determined to improve wheelchair design with a suspension system to absorb shock.

After his initial idea – a hydraulic air cushion in the seat, like those in tractors – proved unsuccessful, he made the audacious decision to reinvent the wheel.

The result of his efforts, with encouragement and financing from Israel’s RAD BioMed Accelerator and a team of experts, is called SoftWheel 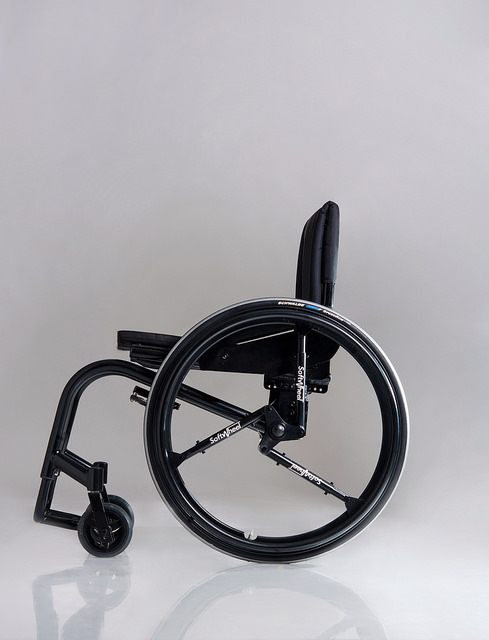 The Acrobat can fit on any wheelchair.

CEO Daniel Barel tells ISRAEL21c that SoftWheel is a breakthrough technology born of three years of R&D in collaboration with Ziv-Av Engineering Group, the same firm that designed the lightweight children’s plastic wheelchair for Wheelchairs of Hope – only this time the company designed the wheels rather than the chair.

The “Acrobat” wheel is now rolling off SoftWheel’s Israeli assembly line. It features a selective suspension mechanism that kicks in when it detects an impact above a pre-set, changeable threshold. The high-tech product can be retrofitted to virtually any wheelchair.

“Part of our strategy is to introduce our products where we can disrupt the market quickly: wheelchairs and bicycles — especially city bikes, the fastest-growing segment in the world for personal transportation,” says Barel.

SoftWheel relies on a patented suspension mechanism that remains static on standard floors or pavements. Encountering an obstacle (such as a curb or stair) causes the wheel’s hub to shift symmetrically from the center, thereby absorbing the shock and cushioning the rider, as well as the vehicle, from the force of the impact. Then, the hub automatically shifts back to its central location until the next bump. 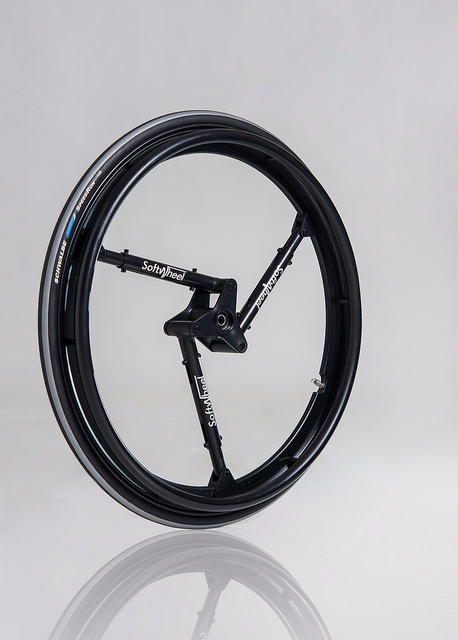 SoftWheel has a revolutionary suspension system.

“Why didn’t anybody do this before?” Barel asks. “Because it’s not as easy as it looks. We have six, and soon seven, patents protecting this technology. Everybody else tried to fine-tune current technology into a wheel. We literally had to reinvent the wheel and a brand-new technology for suspension. And we discovered it is not only suitable for wheelchairs but as a platform for anything that has wheels.”

As such, the next direction for SoftWheel will be skyward.

“We are looking at SoftWheel landing gear for aircraft, based on multiple requests from the industry here,” says Barel. “They tell us that we have something they have been waiting for the past 60 years.”

Barel joined SoftWheel about five months ago, upon returning to Israel after five years building up international businesses abroad. “When we decided to come home, I came across SoftWheel and it seemed like an amazing opportunity,” he says.

One is Dror Cohen, a former F16 fighter pilot paralyzed in a car accident. Cohen went on to become a 2004 Paralympic sailing gold medalist and one of the founders of Etgarim a nonprofit that provides outdoor sports and activities to physically challenged Israelis of all ages.

“The SoftWheel project gives an answer to a real unmet market need,” says RAD BioMed Accelerator President and CEO David Zigdon. “We believe that a wheel that has its own inner suspension system for shock absorption is a game-changer in the industry.”

After “graduating” from the two-year accelerator program, the Tel Aviv-headquartered company built assembly lines in the Haifa area and at Ziv-Av Engineering outside of Tel Aviv. At a time when so much manufacturing is done offshore in China, says Barel, “We’re very proud that we make our product here in Israel.”

The technology could one day reach the automotive industry, but Barel said that will require up to 10 additional years of R&D. For now, the privately held SoftWheel is in the midst of a second fundraising round.