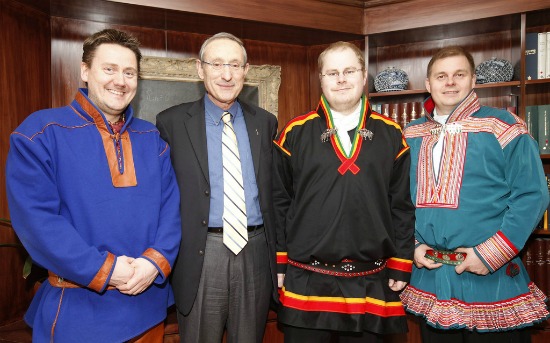 Heads turned as a colorfully dressed delegation of three men from Norway made their way around the Mount Scopus campus of the Hebrew University of Jerusalem earlier this week. Just as their attire attests to their dedication to the traditions of Lapland, the men are on a mission to revitalize the Lapp language called Sámi.

And that’s what brought them to Israel on the United Nations’ International Mother Language Day.

“We saw that less and less people were using Sámi and that the methods for teaching it in the schools were not very successful,” explained Kevin Johansen, an advisor for Sámi issues at the University of Nordland and for Nordland County, which is part of the Lapland region stretching across Norway, Finland, Sweden and Russia. Of about 10 Sámi dialects, only four are still known among the estimated 100,000 Sámi-speakers of Lapland.

Searching for better teaching methods, Johansen consulted with experts in Scotland and Wales, where long-suppressed minority languages are making a comeback.

“They told us that the methods they use they learned in Israel, and they suggested we make contacts with Hebrew teachers here,” he said at a press conference after meeting with Hebrew University president Menahem Ben-Sasson.

The Israeli Embassy in Oslo arranged for Johansen’s tour of the university’s Rothberg International School along with Lars Joar Halonen and Nils Ánte Eira, who head the Sámi language center of the Lavangen municipality.

The men attended a beginner-level ulpan (intensive Hebrew class), met with faculty and learned how the ancient biblical language — transformed into a modern spoken language 123 years ago — is taught to immigrants, students and scholars.

Ben-Sasson told them that the university’s name reflects a conscious decision to use Hebrew as the medium for instruction and discourse at a time when its future was in question.

“Will you be sending teachers here to learn the methods we’ve developed for language instruction?” Ben-Sasson asked. 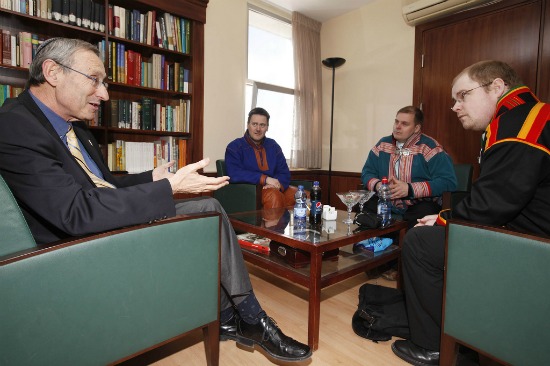 “Absolutely,” responded Johansen. “That’s the next step in our program. We were at an educational conference last week in Oslo, and we heard that more and more people are looking to Israel to learn successful methods for teaching in general, and for teaching language.”

The Norway-Israel connection actually began months before the trip. With financial backing from the Norwegian government’s Action Plan to Revitalize the Sámi Language, Johansen hired American-Israeli ulpan director Shlomo Eitan as a consultant.

“They were looking for new concepts in language teaching, and I have been to Norway seven or eight times to advise them,” Eitan tells ISRAEL21c. “We’re hopeful that we can give adult learners an exciting, positive experience with learning language so that they will want to continue.”

Johansen, married to an Israeli woman he met while learning Spanish in Spain, tells ISRAEL21c that the Hungarian-related Sámi is a much older and entirely different language than the Germanic-based Norwegian. “The first Bible published in Sámi was in 1754, while the first Norwegian Bible was published in 1908,” said Johansen.

His young daughter is learning a northern Sámi dialect that has about 500 speakers, and he says many young artists are performing in Sámi these days as a statement of ethnic pride.

The revitalization initiative in Lavangen started in 2008, said Halonen. The municipality established a center in which a Sámi-language kindergarten opened in August 2011.

The center will eventually offer adults a six-month ulpan-style course for parents, preschool teachers, municipal employees and healthcare workers. “We have nurses in old-age homes who need the language to communicate with older patients who speak Sámi,” Halonen explained.

“My parents don’t speak Sámi because the generation before them refused to speak it,” Johansen added. “It was considered shameful and was forbidden at school. Now, in retirement homes, they’ve found that Sámi is a hidden language. People who would never have admitted it was their first language, when they get dementia they forget Norwegian and only speak Sámi.”

Over their five-day visit, the men also met with officials at Israel’s Ministry of Education and were feted at a reception at the Norwegian ambassador’s residence.