Seeing an opera at the footsteps of Masada is a majestic experience. The Israeli Opera knows this, as does the Ministry of Tourism. And it is for this reason that a concerted effort was made this year to draw “cultural tourists” to the open-air stage at this historical, UNESCO World Heritage site.

Giuseppe Verdi’s popular opera, La Traviata, is staged the world over numerous times in a year. But seeing it on the backdrop of a stunning ancient fortress at the lowest point on Earth can only be achieved at the Israeli Opera Festival at Masada (June 12-17, 2014).

For 50,000 lucky ticket-holders, this year’s production is indeed a feast for the eyes. Some 700 singers, dancers, musicians and actors are sharing the 3,500-square-meter stage.

While Nabucco (2010), Aida (2011) and Carmen (2012) easily adapted to the enormous stage, even Polish director Michal Znaniecki admitted that bringing the story of a Parisian prostitute to Masada “was a real problem.”

La Traviata is a personal psycho-drama usually staged in an intimate setting. Yet after much discussion with Maestro Daniel Oren — one of the most sought-after conductors in today’s opera world, and who has conducted all the productions at Masada — Znaniecki turned to metaphors to recreate Verdi at Masada.

First of all, he uses the mountain as a huge clock of life that projects the dwindling time Violetta has left. “It’s like the metaphor of our life; she has no more time and we have no more time. She decided to be free, to leave Paris, to love somebody – against everybody… she chose to be not losing time,” Znaniecki told a group of reporters in between acts during the final rehearsal.

Secondly, in order to fill the space, Znaniecki decided to use seven Violettas in her dying scene spread out around the stage. “I think it will be easier for everyone to follow one of the Violettas,” he says. “You can follow one Violetta; it can be your sister, your mother, your lover. It’s universal; it can be in every time, in every epoch. People are missing because of cancer or tuberculosis; it doesn’t matter the costume.” 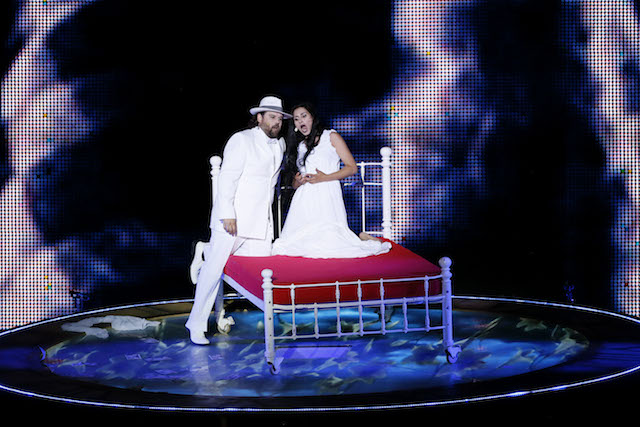 Photo of dress rehearsal at Masada by Miriam Alster/Flash90.

Once again, the Israeli Opera produced a first-class opera on a unique backdrop.

And judging by the numerous languages spoken by audience members, it would seem the Israel Ministry of Tourism’s NIS 1,750,000 budget for marketing support for the opera festival paid off. The ministry had campaigns in Germany, Italy, France, Russia, England and the US to entice cultural tourists to the Judean Desert.

Each opera festival at Masada injects about NIS 80 million into the economy.

“Many locations are now actively developing their tangible and intangible cultural assets as a means of developing comparative advantages in an increasingly competitive tourism marketplace, and to create local distinctiveness in the face of globalization,” according to an OECD report “Impact of Culture on Tourism.”

Opera at Masada has helped achieved this goal in Israel, say organizers of the annual festival.

Says Znaniecki: “I think culture tourism is the future of the opera. There are people who travel from festival to festival in the summer, and Masada is now one place in this tour. You have to be here.”