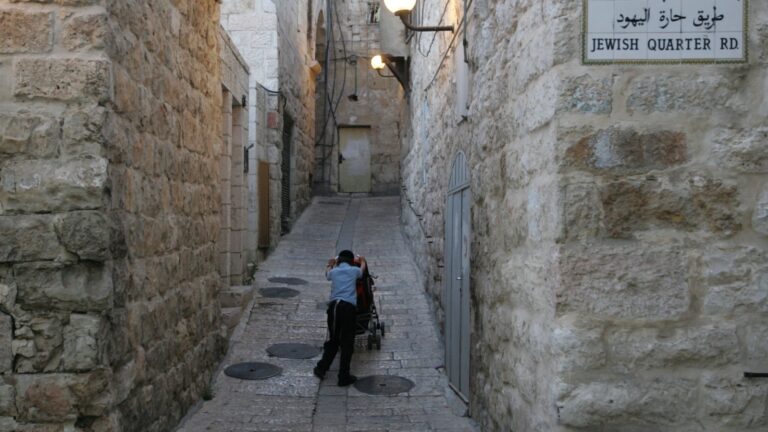 Pushing a stroller through Jerusalem's Old City will now be easier than this. Photo by Nati Shohat/Flash90

The Old City of Jerusalem and its walls are a UNESCO World Heritage site and the most visited place in the State of Israel, with some 10 million yearly visitors.

But navigating the narrow, crowded cobblestoned lanes and uneven stone stairs is hard or impossible for anyone with difficulty walking, let alone parents pushing strollers.

Now, after a decade of work by seven government bodies, the historic district finally has greater accessibility to pedestrians, carriages, vehicles, children and tourists as well as to emergency vehicles and mobility aids.

All the Old City gates now are accessible and can be reached via the Free P&R Shuttle running from the First Station parking lot to the Dung Gate and back daily (including an hourly wheelchair-accessible shuttle).

Inside the Old City, four kilometers of streets in the Muslim, Armenian and Christian quarters were made accessible, and about 2 km of handholds were installed alongside staircases, constituting about 60 percent of all public roads in the Old City.

The main accessible routes run north-south from the Zion Gate to the Damascus Gate (Cardo Route), and east-west from the Jaffa Gate to the New Gate, to the Church of the Holy Sepulcher and the Western Wall Plaza.

An international conference on the accessibility of historic cities will take place in Jerusalem in September 2019.