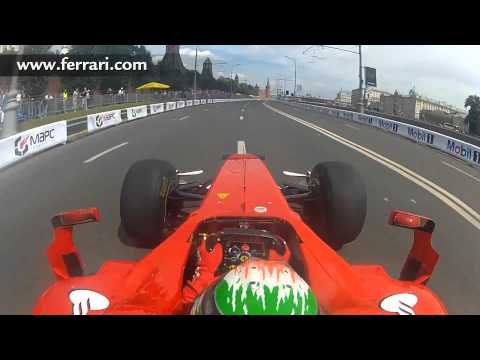 Jerusalem may be in a gridlock today due to US President Barack Obama’s visit, but come June the city’s roads will witness cars zooming along at 350 km/h (220 mph). For the first time, Formula One drivers will turn the holy city into a race track and zip along one of the most beautiful circuits in single-seater auto racing history.

“It’s great to have the chance to drive a Formula1 car on the streets of a city that is as fascinating and full of history as Jerusalem,” Italian racing driver Giancarlo Fisichella, who will drive a Ferrari F1 car, told a press conference in Jerusalem. “I’m sure the event will attract lots of people along the track – a genuine circuit that will wind up and down through the hills and that will at one point run next to the walls of the Old City. It will really be a unique and fascinating experience.”

The event, called the Jerusalem Peace Road Show, will take place June 13-14, 2013. From June 9-13, the cars taking part in the historical circuit around the city – including Ferrari, Mercedes-Benz, Audi – will be on show at the Old Jerusalem Train Station.

The happening is a co-production by the city of Jerusalem with support of multi-national computer security company Kaspersky Lab.

“I’m really happy that we succeeded in bringing Scuderia Ferrari to Israel, contributing to the first ever city racing in the region – the Jerusalem Formula, the Peace Road show,” said Eugene Kaspersky, CEO of Kaspersky Lab. “In our company we believe it’s important to tread new paths and do things differently, and I hope this unique project will be a bright beginning to a new big racing story!”

The June event is not an actual race but rather an automotive showcase. The city will set up bleachers along the route for prime viewing – but those who don’t want to pay to sit down, will be able to watch the event from the sidewalk.

“It will be a historic event to see a Formula 1 car with the background of the walls of Jerusalem,” said Mayor Nir Barkat, “It will also be beneficial for the economy, tourism and the promotion of the city all over the world. Jerusalem has 5,000 years of history but it cannot and must not stand still, instead it must embrace the modern day. Ours is a city that is open to everyone and it is important to send a message of peace without any political meaning: we hope to have everyone together to see this most beautiful display of motor sport up close.”

UNCOVER ISRAEL - Get the ISRAEL21c
Weekly Edition free by email
Sign Up Now!
Bring Israel's story to life.
Millions of people around the world rely on us to gain a deeper understanding of Israel. We are the trusted source for original content you won't find anywhere else.
You can make a difference. Donate today to support journalism that brings Israel’s story alive.
SUPPORT ISRAEL21c
Read more on:   News, Jerusalem, F1, Ferrari, Formula One