With new classrooms and technology tools, Mayor Nir Barkat has declared an education revolution in the eastern sector of the capital city. A school in Ras al-Amud, an Arab neighborhood in East Jerusalem southeast of the Old City.

When the 2011-2012 school year began in the Arab neighborhoods of East Jerusalem, millions of shekels in sparkling new or renewed classrooms, computers and sports facilities greeted 42,153 students and their teachers.

Many of the 59 public schools approved and budgeted under the Jerusalem Education Authority of the Ministry of Education have been neglected, undersupplied or overcrowded for decades. Since taking office in November 2008, Mayor Nir Barkat has been implementing improvements to get these facilities on par with schools in the western sector of the city, says Stephan Miller, advisor to Jerusalem’s mayor.

“The completion of the Mayor’s plan will lead to a significant change in education in eastern Jerusalem.”

New schools, including approximately 200 classrooms, have been built in the eastern part of the city. The municipality is currently investing the unprecedented sum of NIS 300 million (about $69 million) in the planning and construction of 285 additional new classrooms for Arab schoolchildren.

This year alone, 42 new classrooms will be opened in new buildings, 18 at the start of the year and the remainder in coming months. Six additional kindergarten classrooms were completed in time for September, including one for special education. In addition, more than 40 public school classrooms were renovated and adapted to pupils’ needs, with emphasis on the Shoafat refugee area in northeast Jerusalem.

The municipality also built new sports facilities in south central Beit Tzafafa and in Isawiya in the northeast.

Another NIS 750,000 (more than $170,000) per year has been approved for programs to advance gifted and outstanding pupils, strengthen girls’ education and reduce school violence. An additional NIS 1.5 million is newly designated for the public schools’ organizational expenditures. 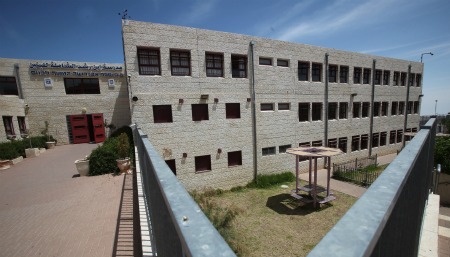 A school in Sur Baher, an Arab neighborhood on the southeastern outskirts of Jerusalem.

The municipality and the Education Ministry have shared costs for these initiatives, says Miller, and further upgrades are still to come.

“As you can imagine, from vision to construction takes time, and the mayor has moved swiftly since taking office to fast-track these plans,” says Miller, “which is why they are ready so early in his first term.”

New classrooms wouldn’t be as valuable without updated equipment inside them. So with the assistance of Israeli branches of companies such as Ernst & Young and Intel, the municipality rang in the new school year by distributing 1,720 mobile and desktop computers to schools, kindergartens and teachers in eastern Jerusalem.

An additional 350 new donated computers were given to schoolchildren to take home.

There was more good news for teachers: Seven classrooms in six schools in the eastern part of the city were converted into technologically sophisticated learning centers with the installation of interactive whiteboards, which can display educational software, web sites, past lessons and other features. Teachers and principals alike have been receiving computer training courses to maximize their use of these new tools.

“We are committed to investing in eastern Jerusalem and reducing the gaps, which are the result of years of neglect,” said Barkat upon announcing the improvements at the start of September. “We cannot countenance a situation in which Jerusalem pupils have no classrooms, roads or basic infrastructures. These investments will lead to an increase in residents’ quality of life.”