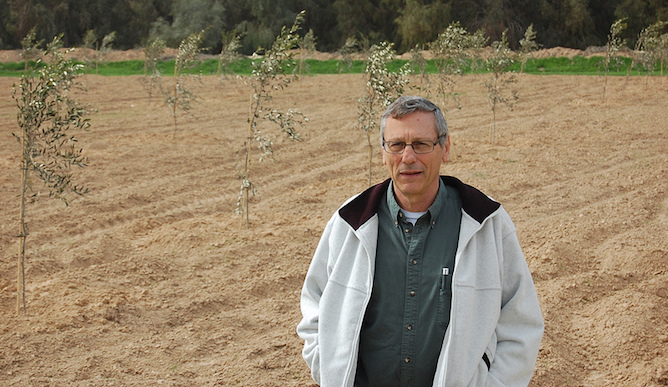 Though Prof. Pedro Berliner devotes much of his time and energy to confronting the challenges posed by arid zones, he says he does not consider deserts “the enemy.”

Indeed, the director of Ben-Gurion University’s Jacob Blaustein Institutes for Desert Research not only works on the Sde Boker campus in the Negev, but has lived there with his family since 1987.

“Our motto is to turn curses into blessings,” says Berliner, a leading expert on dry-land agriculture. “The temperature of the desert is high, but this is conducive to plant and animal growth. The water is salty, but many good things can be done with it. The Negev is quite far from the center of the country, but this means more affordable real estate.”

For his groundbreaking research in agro-hydrology – and his efforts at “making it easier to settle the desert” – Berliner was honored by the French Ministry of Agriculture on November 27. The National Order of Agricultural Merit was presented to Berliner (as well as to Israeli winemaker Eli Ben-Zaken) at the French Embassy in Tel Aviv, in the presence of French Ambassador Patrick Maisonnave and Israeli Agriculture Minister Yair Shamir.

The 67-year-old scientist, who immigrated to Israel in 1970 from Argentina, does not dwell on his prize when he sits down with ISRAEL21c to discuss his contribution to combating desertification. He prefers to tout the accomplishments of the institute and its 83-strong academic staff dedicated to the sustainable development of the desert.

The varied projects focus on how to best utilize the Negev’s abundant sun and marginal water. The huge paleo-aquifer under the Negev is saltier than freshwater and doesn’t taste good, but it’s great for things like raising fish and growing tomatoes. The special tomato for export, branded “Desert Sweet” in the United States, is “a serious source of income for the farmers in the Negev,” says Berliner.

As for the fish, “It turns out that the combination of the hot climate and the water drilled from the aquifer is well suited for raising tropical fish for aquariums. It’s pretty amazing when you think about it: Tropical fish are being raised in the desert and exported. The fish farmers are making a nice income from it.”

The institute introduced fish farming to the region and continues to work on solving problems such as disease transmission among tropical fish in aquariums.

Nor is any drop of the water wasted. After the fish have been raised and removed from the water, it is then used for crops, “making the whole system very efficient.”

The water from the aquifer can also be purified, says Berliner. The desalination group at the institute is dealing with this issue.

Another beneficial use of the water is growing algae, a natural product that is ultra-popular in the nutraceutical and cosmetics industries.

“Our scientists developed the methods for growing algae,” says Berliner proudly. “And there is a profitable factory in the Arava based on it.”

The institute at Sde Boker is also famous in the international agricultural community for its work with freshwater, which in the desert comes mainly from flooding.

“Taking advantage of floods for crops is not our invention,” admits Berliner. “The first people who came up with this idea were the Nabataeans, who settled this area 2,000 years ago. They had a simple and efficient method for doing so. Our system is based on the ancient system, but with improvements that are the result of our understanding the physical and physiological processes involved.”

Because most arid regions are afflicted with floods, says Berliner, “We adapted the system for the Third World. It is a low-tech way of making a difference in underdeveloped countries.”

Though none of the institute’s work is political in nature, it was established in 1974 through a cabinet decision. As Israel is surrounded by mostly hostile neighbors with similar climate and agricultural concerns, a shortage of water and conflicting claims over its “ownership” is a sore spot.

A group of hydro-geologists at the institute deals specifically with this issue. As Berliner notes, “There isn’t always correlation between bodies of underground water and borders of countries, and often a body of water lies beneath two states.”

The institute’s hydro-geologists, he says, “employ sophisticated methods to enable the intelligent use of the water, to arrive at agreements, rather than wars, over the joint resource.”

Pushing back the desert

A larger issue that Berliner and the institute are trying to tackle is the global phenomenon of “desertification.” Areas that once were fertile are turning into deserts, says Berliner, attributing this to factors including climate change, natural-resource mismanagement and war.

The problem is so serious, he says, that the United Nations established the Conference of the Parties of the UN Convention for Combating Desertification, in which all member states participate. Israel has gained such international renown for its research and development in this field that recently a former director of Blaustein – Prof. Uriel Safriel – was elected to chair the convention’s Committee on Science and Technology

“As a result of desertification, we’re seeing a gradual decrease in agricultural activity in areas on the edges of deserts,” says Berliner, citing Africa, Central America, South America and Asia. “But monitoring it isn’t so simple. We can look at satellite photos, but it’s not enough to get a picture; you have to understand its meaning.”

Mapping the desertification processes, deciphering the data and issuing warnings are key elements of the institute’s work. Mathematical models describe the relationship between plants, soil, the atmosphere and rainfall for the purpose of detecting changes.

“This is also connected to our research on the behavior of natural plant growth,” says Berliner. “We see a plant growing in the middle of the desert and ask ourselves how it lives while others do not. Perhaps there are genetic or biological mechanisms that enable it to adapt to the environment. If we can pinpoint those characteristics, maybe we can then transfer them to other crops we are interested in growing.”

Wildlife in the desert

Animal life, too, is under study at the institute.

“The Negev is a kind of intersection of different regions, a bridge between Eurasia and Africa. So, as much as it looks like a wilderness, it contains a wide range of species.”

Animals of the desert usually live in burrows and caves, venturing out only at night. “One thing being researched is how these burrows are ventilated. The animal lives inside it and breathes, so the CO2 should rise, making the oxygen level low. How do the animals manage that?”

Indeed, he says, “The Negev is like one big laboratory of arid regions in the world. And our institute has the great advantage of being at the location of its research. It’s what makes it special. A European researcher doesn’t have the environmental conditions for carrying out arid zone-related research. In Africa, the environmental conditions are right, but the tools for carrying out research are lacking. We have both.”

It is for this reason that scientists and researchers come from all over the world to study at the institute. Courses at the graduate school are taught in English.

“I don’t like to think of what we do here as ‘combating’ desertification,” the mild-mannered expert famous for doing just that concludes. “I prefer to call it ‘arresting’ the phenomenon.”