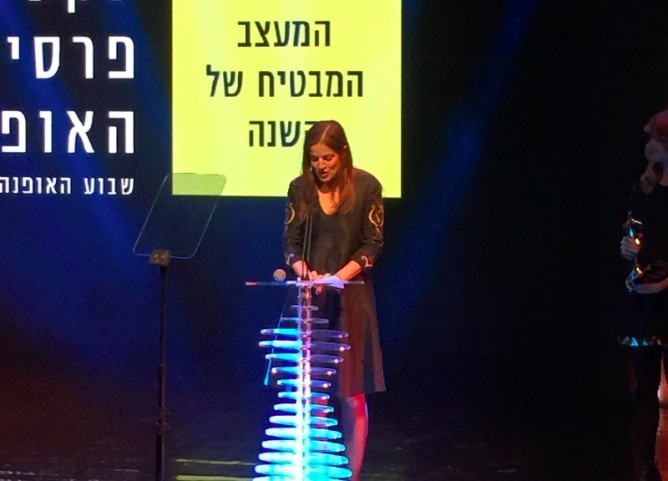 Sharon Tal at the awards ceremony.

Sharon Tal, head designer of the reborn Israeli fashion house Maskit in Tel Aviv, won the Most Promising Designer designation for 2014 from the Israel Fashion Industry Awards during the international Holon Fashion Week on November 24-29.

An honors graduate of the Shenkar College of Engineering and Design, Tal worked in Paris with fellow Shenkar alumnus Alber Elbaz at Lanvin, and then became the head of embroidery at Alexander McQueen in London.

On her return to Israel, Tal began working with Ruth Dayan to revive Maskit, which Dayan founded in 1954 as a fashion and decorative arts house that created jobs and preserved the ethnic crafts and culture of the diverse communities living in Israel. Maskit styles were sold internationally in prestigious stores such as Bergdorf Goodman and Neiman Marcus. ISRAEL21c reported last February about the fashion house’s relaunch. Tal chose to update Maskit’s iconic items, such as the desert coat, the egg coat and the toga. She drew on Maskit’s traditional designs while using new high-quality fabrics to narrate the story of Israel through its textiles, embroideries, craftsmanship and designs.

Meanwhile, Shenkar class of 2014 graduate Noa Raviv was named Best Fashion Designer of the Year at the international 3D Printshow in Paris in late October. She designed her “Hard Copy” 2D/3D collection by manipulating digital images using computer modeling software from Stratasys, the American-Israeli 3D printing giant. Stratasys agreed to print the highly unusual fashions, which are based on classical Greek and Roman sculpture. One of Noa Raviv’s 3D printed designs. Photo by Ron Kedmi
YOU CAN GET ISRAEL21c NEWS DELIVERED STRAIGHT TO YOUR INBOX.