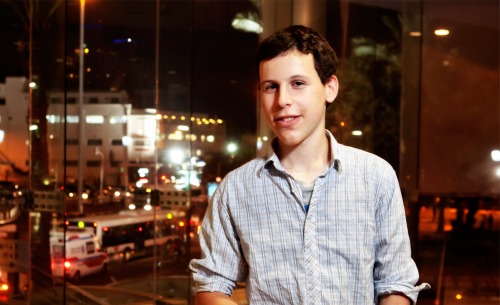 Ben Lang gets a kick out of sharing the story of how he received a cease-and-desist order from the New York Times for making a website called freenewyorktimes.com, which explained how to get around the venerable newspaper’s impending pay wall.

“They shut down my server for a week, and I couldn’t even login to take down the website,” he recalls. “If they would have asked nicely I would have stopped.”

Perhaps the most remarkable part of the anecdote is that his tussle with the Iron Lady took place in December 2010, when he was just a few years past bar-mitzvah age.

Lang was born in Haifa 18 years ago, but left with his parents at age one for suburban New York. Now he’s back, and has plunged head-first into the Israeli high-tech world.

“We have 2,500 members in our Facebook group. It’s the biggest community in the scene,” Lang tells ISRAEL21c. “We want to get the word out there about high-tech innovation in Israel.”

Since arriving with his parents and two younger sisters in September, Lang has been working at Nes Ziona-based Conduit, a fast-growing network of web and mobile app publishers. He’s on the marketing team for Wibiya, a website enhancement company recently acquired by Conduit.

“My interest in high-tech started before, but now that I’ve come back to Israel — after being at a Silicon Valley incubator last summer — and seeing how amazing the startup community is, I want everyone to know about the incredible companies coming out of this area,” says Lang.

At just 14, Lang started his own eBay business. His later websites include EpicLaunch, a blog for young entrepreneurs; and MySchoolHelp, a site for students to find and share class notes.

“MySchoolHelp is still up and running,” he reports. “We got 170 schools added to it, although it’s hard to manage from here when all the schools are in America.”

Philippe and Jennifer Lang, the whiz kid’s French father and American mother who met in Israel, took their family to Ra’anana for a return-to-Israel test run when Ben was starting high school.

Though most ninth-graders have adjustment difficulties at a new school, Lang won an excellence award at the Technologi School and has only fond memories of that year.

“I loved wearing shorts to school. I loved the good kosher food. I loved the whole atmosphere here,” says Lang.

During the summer between 10th and 11th grade, he came back and worked at Kampyle, a pioneer in feedback analytics. He says he always planned on returning to Israel permanently after high school, and was pleased that his family decided to join him.

Having spent most summers in Israel, his adjustment was a breeze, made even easier because he speaks Hebrew as well as English, Arabic and French — not to mention PHP, WordPress and Java.

Not your typical egghead, Lang enjoys running, swimming, skiing and tennis. He is certified in lifeguarding and first aid, and ran a half-marathon in 2:02 in San Francisco.

The next interesting thing

Online education and mobile payments are the two business areas that most intrigue Lang at the moment.

“I like working on things I’ve started myself. Right now I want to learn from really smart people.”

Asked to name his role models in Israeli high-tech, he mentions the founders of Wibiya and Kampyle as well as Yaron Samid of BillGuard, an app that fights credit card fraud; and Omer Perchik of AnyDo, an advanced organization app.

He sees differences between the startup culture in Silicon Valley and Silicon Wadi. “Israel is a smaller country — a smaller scene, so it’s easier to get to know everyone. And startups spend money more carefully here.” There’s also the Jewish angle: “We lit Chanukah candles together at the office, and that definitely didn’t happen anywhere in America.”

For the next three years, he won’t have as much time for entrepreneurship. He’ll be starting his compulsory military service in March. But he’s already thinking ahead to how his future army buddies could be part of his career plans.

“In five years, I would like to be working on a startup of my own, maybe with some programmers from the army who would love to work on the next interesting thing to make an impact on the world,” says Lang.