Not only soldiers sprang into action the moment Israel’s military launched Operation Pillar of Defense in response to incessant rocket fire from Gaza. Israeli civilians in the center and north of the country also responded by offering Mideast hospitality to families wishing to escape the stress and trauma for a night, a weekend or longer.

“The day everything started, we got families to sign up as hosts,” says Keren Claster, assistant to the mayor of Efrat, south of Jerusalem. “We’re also gathering toys and books to send to shelters in the South.”

When ISRAEL21c spoke with Claster four days into the conflict, she reported that seven children from temporarily relocated southern families were already attending local nursery and elementary schools with cooperation from the Ministry of Education. “It’s a very fluid situation, and we are ready to accept more families as needed,” she says.

Since the start of the conflict with Gaza, 900 rockets have been fired towards Israel, killing three and seriously wounding many others. Over one million people in the South have experienced an endless round of air-raid sirens, and have been told to be no further than 15 seconds from their shelters at any time. The toll on their emotional and physical health is enormous, and many seek a bit of respite for themselves or their children.

“Our kids are showing signs of severe stress. Our spouses have stopped eating when there is news about an attack in Gaza. Our blood pressure goes up as we count off the locations where missiles have fallen,” blogs Beersheva-area resident Faye Bittker. That count was up to 152 as of Wednesday morning.

In an effort to help, many Israeli communities, organizations and schools got on the hospitality bandwagon.

Jerusalem College of Technology-Machon Lev housed 50 members of the Ashdod chapter of the national youth group Bnei Akiva during the Sabbath of November 16-17. “We are planning to have some more this coming Shabbat if there is still a need,” says Machon Lev spokeswoman Rosalind Elbaum.

A yeshiva in Ma’aleh Adumim, northeast of Jerusalem, housed families with children that same Shabbat through an organization in Beit Shemesh, Ezrat Achim Medical Assistance Center. This group placed 350 southern families with hosts in Beit Shemesh and greater Jerusalem. Families of a northern Waldorf School in Israel are hosting families from the Beersheva branch, while children and faculty in the southern AMIT network of schools have been welcomed to take respite at AMIT schools in the north.

Dovy Singal, an activist in the Jerusalem neighborhood of Armon Hanatziv, in coordination with local synagogues, created a Google document for potential host families to sign up. He says several are hosting people from the South.

Nishmat Center for Advanced Torah Study for Women, also in Jerusalem, on Friday prepared rooms and free meals for any southern families wishing to come. Coordinator Naama Dekel says one family from Beersheva stayed over with their three children.

“Many other families wanted to come, but in the end they were afraid to travel,” Dekel tells ISRAEL21c. However, by Tuesday nine families had arrived at Nishmat from Beersheva, Sderot and other southern communities.

Laura Ben-David, social media coordinator for the immigration assistance organization Nefesh B’Nefesh (NBN), relates that NBN contacted more than 500 North American or British immigrant families living in the South, in addition to soldiers and lone soldiers known to be in the area of conflict.

“We spread it among our entire staff to make sure we’re reaching everyone,” she tells ISRAEL21c. “People have been making calls to find out who needs assistance, and who wants to get away for Shabbat or longer. And I’ve been coordinating the collection of names of anyone — not just olim – who are willing to offer their homes. The response has been unbelievable.” 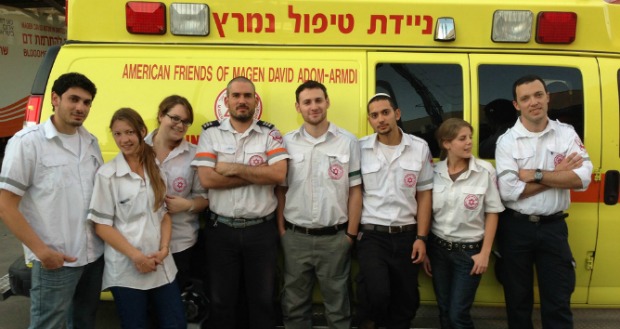 Ben-David matched up 10 families from Ashdod with hosts, taking into account number and ages of children, pets and other factors. “You want them to be comfortable,” she says.

Camp Kimama, an international Jewish summer camp with campuses in Michmoret on the Mediterranean coast and in the Upper Galilee, on Sunday was gearing up to house 65 kids ages 10-15, and expected about 20 more from the Beersheva-based Meytarim pluralistic school.

“In 2006, during the second Lebanon war, we bought children down from the Upper Galilee to our Michmoret campus, so when this latest fighting broke out it was natural for us to see what we could do to alleviate some of the suffering and anxiety,” director of operations Evan Muney tells ISRAEL21c. Thanks to donors, he adds, “They can stay as long as the conflict goes on.”

Several of Israel’s universities and colleges have offered dorm space for families seeking respite. The Hebrew University of Jerusalem, for example, made space for families of dorm students from the South who wished to come and stay.

The neighborly efforts begun by individuals and institutions have not only focused on safe places to stay.

Dr. Limor Aharonson-Daniel, head of emergency medicine training at Ben-Gurion University of the Negev, responded to the Beersheva municipality’s call for volunteer assistance with a list of 300 university staff and students willing to staff trauma centers and child-care settings.

She explains to ISRAEL21c that Beersheva workplaces will likely reopen before schools do, causing a crisis in childcare. “The lists are prepared and people are ready to help when workplaces open again,” she says.

About half of the students in the university’s paramedical certification program are augmenting the crew at the city’s Magen David Adom (MDA, Israel’s equivalent of the Red Cross) first-responder station.

Oren Wacht, the local MDA training coordinator who works with the 40 second-year students in the program, contacted the class when the university closed because of the incoming rockets. Aharonson-Daniel says some of those who intended to volunteer were instead called up to the reserves, as were many of the regular MDA crew.

In Jerusalem, Herzog Hospital’s Israel Center for the Treatment of Psychotrauma worked quickly to establish a support line in five languages — Russian, Amharic, English, French and Hebrew. A similar hot line was set up by the Interdisciplinary Clinical Center at the University of Haifa.

According to Herzog’s Prof. Danny Brom, “We received a request for help from a phone line for parents of young children in the south, asking us to jump in, because they don’t have the knowledge to help in emergency situations. So we decided to open our phone lines specifically for parenting issues. We have a lot of experience in this field since we have operated a service in Sderot for more than eight years. In those years, we have done extensive research and learned that the best way to protect children is to work with the parents.”

Children are foremost on everyone’s minds. Emunah National Religious Women’s Organization arranged to take 150 children from Netivot, Ashdod, Kiryat Gat, Ashkelon and other besieged areas from the South for two day trips this week to the Kiftzubah amusement park, lunch and a tour of Jerusalem’s Old City.

On Wednesday, the University of Haifa in collaboration with its Student Union,  hosted 250 people  children and their parents, for a day of fun followed by activities specially organized for them at the University’s Hecht Museum, with clowns and magicians, as well as activities run by music and art therapy students on campus.

Leket, Israel’s national food bank, is supplying 1,400 sandwiches a day to children in shelters throughout Ashkelon, and allocating food vouchers to 400 families in need.