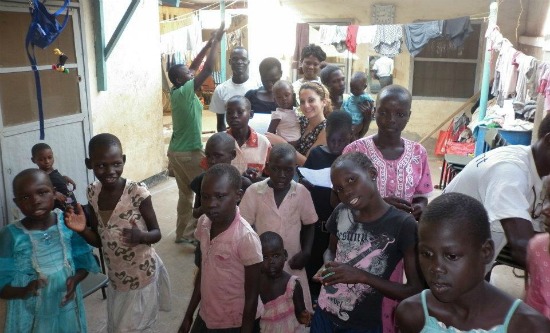 West of Eritrea and Ethiopia, and north of Uganda, a new African state has emerged from decades of civil war to gain its independence. Last July, South Sudan was declared an official country and was recognized by the United Nations. Israel, which had been assisting the people of the region for the past decade, extended a warm diplomatic hand right from the start.

Eager to help this new country gain a foothold amongst its complicated host of societal problems, the Israeli humanitarian aid organization IsraAID is launching diplomatic and humanitarian efforts including a new social-worker training program in cooperation with the Israeli NGOs FIRST and Operation Blessing-Israel.

Targeting the weakest links of society, three Israeli experts on sexual violence flew to Juba, the interim capital of South Sudan, the first week of March with the sponsorship of the UJA Federation of Toronto in Canada. Their assignment was to give 30 local social workers the tools to identify and address gender-based violence (GBV) such as rape and forced marriage.

Heading the program is Ophelie Namiech, IsraAID’s country director for South Sudan. She tells ISRAEL21c that Israeli social workers have the education and experience to help.

“Israelis have solid and unique expertise and experience in the field of post-trauma. The three Israeli experts who are leading IsraAID’s training workshop on gender-based violence and post-trauma assistance for local social workers in Juba are highly skilled therapists and social workers with extensive experience in trauma and sexual abuse in Israel,” she says.

“Sheri Oz created and directed a trauma center for women victims of sexual abuse in Haifa. In 2006, during the war in Lebanon, she worked with communities affected by the war in northern Israel and witnessed the impact of war on GBV,” says Namiech.

“The war indeed broke down the traditional social order and severely increased women’s vulnerability. She strove to rebuild the social order within affected communities. Sheri and her two colleagues apply those unique skills they have developed in such a context in Juba.” A counselor from Confident Children out of Conflict at a safe house with vulnerable children.

The Israelis will work with counselors from the locally based Confident Children out of Conflict, an organization that provides a safe house for more than 400 abused, abandoned or at-risk girls from the Juba slums.

Violence against women is considered one of the biggest challenges in the Juba region. After decades of conflict, women’s rights have been ignored or forgotten. Authorities turn a blind eye to wife-beating, polygamy, forced marriages and the like — all regular occurrences in the region.

Namiech says that according to the South Sudan minister of social development, the number of victims reaching out for help dramatically increases every week. For instance, the ministry received word of two cases of forced marriage over a recent two-day period.

“There is an urgent need to train skilled social workers who will be responsible to counsel and accompany the women and girls after their trauma, and who will be, in the meantime, in charge of providing support in a trauma/counseling center for women,” she says.

In August last year, IsraAID, FIRST and Operation Blessing-Israel had already sent some much-needed relief to the violence-stricken region of Juba. Half a year later, violence still pervades the South Sudan society, and the country is considered one of the most underdeveloped in the world.

Yet the people are deeply aware of Israel, says Namiech. According to her, they see Israel as a country that helped them become independent, and as a partner in developing their new nation. Rearview car mirrors in South Sudan often have Israeli flags waving from them; one neighborhood in Juba is called Hai Jerusalem (Long Live Jerusalem); and the city’s Shalom Hotel pays tribute to the Hebrew greeting meaning “peace.”

Many Christian South Sudanese dream of the day they will be able to visit the Holy Land, she says. “Israelis are warmly welcomed and it is easy to feel home here in Juba. It is a pleasure to work in such a friendly environment. It creates a very positive and, therefore, productive human, social and professional dynamic,” says Namiech.

“It is easier to establish long-term partnerships in such a context as trust rapidly develops between us and the South Sudanese.”

UNCOVER ISRAEL - Get the ISRAEL21c
Weekly Edition free by email
Sign Up Now!
Bring Israel's story to life.
Millions of people around the world rely on us to gain a deeper understanding of Israel. We are the trusted source for original content you won't find anywhere else.
You can make a difference. Donate today to support journalism that brings Israel’s story alive.
SUPPORT ISRAEL21c
Read more on:   Humanitarian Aid, South Sudan, Social Action