For the first time in 14 years since arriving at the Zoological Center of Tel Aviv-Ramat Gan, Tanda the two-ton rhinoceros can see clearly. Israeli staff at the Safari zoo tried all kinds of conventional medications and treatments to harness their 22-year-old rhino’s chronic eye infection — to no success — before sewing a custom-made adaptation of an equestrian fly mask for the horned herbivore. 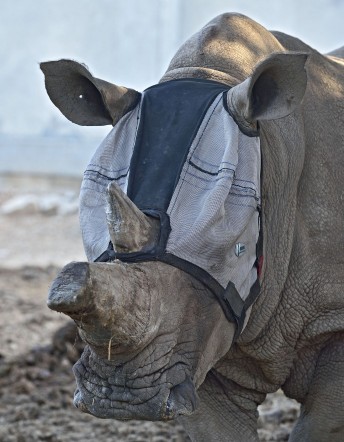 Neta Gueta of the Zoological Center of Tel Aviv-Ramat Gan says she thought up the idea of using the enormous face mask to stop flies from laying eggs in Tanda’s eye after seeing a similar device work for horses suffering from a related condition.

Gueta used special netting with a technology that allows flies to stand on it but denies them from laying their eggs inside. Despite skepticism from the zoo’s veterinarians, Gueta says she continued working on the mask that goes around Tanda’s horn until the finished product was ready.

In a press release, the Safari says that Tanda was slowly introduced to the mask by wearing it for short spurts at a time. Now, it reports, the enormous patient waits for Gueta to arrive in the morning to put the see-through mask over her face for the entire day.

Before this innovative device was ready, Tanda would rub her eye on rough tree bark and only exacerbate the infection.

“At the end of the day I saw that she was cooperating entirely and she understands that this is for her good,” Gueta told AP. 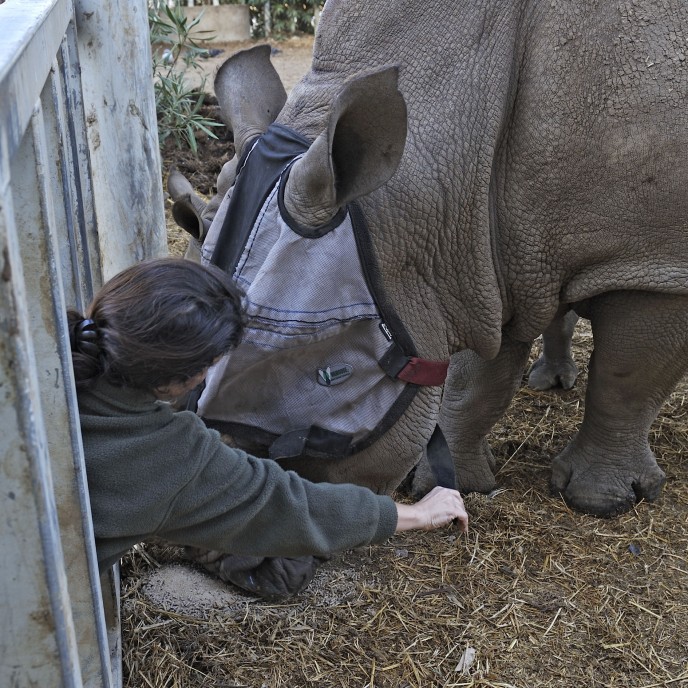 Neta Gueta of the Zoological Center of Tel Aviv-Ramat Gan puts a face mask on Tanda the rhino. (Tibor Yager/Ramat Gan Safari)
YOU CAN GET ISRAEL21c NEWS DELIVERED STRAIGHT TO YOUR INBOX.