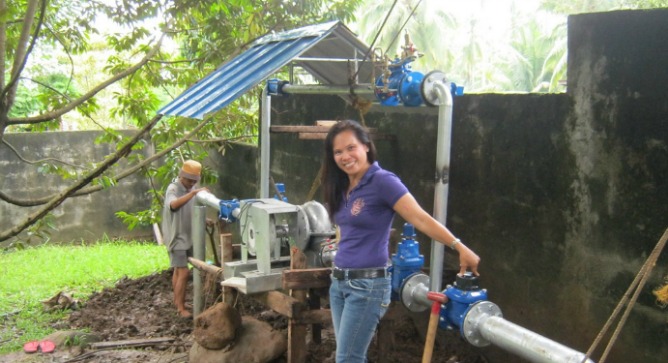 The Benkatina Turbine in use in the Philippines.

You don’t have to build dams to get hydroelectricity from water flowing through municipal pipes, says Dr. Daniel Farb, the Los Angeles immigrant who previously shook up the Israeli clean-tech power scene with his Leviathan Energy company’s award-winning Wind Tulip.

The ecologically conscious physician recently unveiled his latest brainchild, a turbine that turns excess pressure inside existing underground water pipes into energy for the electric grid.

The Negev-based Leviathan team is still fine-tuning the invention at its new testing site rented from Kibbutz Re’im. The Negev kibbutz’s Isralaser industry is fabricating many of the parts for the turbine, dubbed “Benkatina” in tribute to Second Temple High Priest Ben Katin, who made a machine to lower and raise the ancient Temple’s laver to and from the water table.

The modern version based on Farb’s vision was engineered by Avner Farkash, Leviathan’s vice president for research and development.

The Benkatina beta model has already been implemented in pilot areas by Israel’s national water carrier Mekorot, and in the South Philippines. An Italian partner is lined up next, and Farb recently met with a power company in Mumbai that is interested in doing business.

He tells ISRAEL21c that the invention is creating an international buzz because it opens a new energy market using existing infrastructure, and even solves a problem in that infrastructure.

“Managers of water systems already know where there is excess pressure, and often they put pressure breakers in those locations to prevent leaks from forming. One of the great things about what we’re doing is that we are battling the water and energy shortage at the same time,” Farb points out. “An estimated $14 billion worth of water is wasted each year through leakage, and decreased pressure means decreased leaks.”

The company received a grant from the Chief Scientist of the Israeli Ministry of Trade and Labor under the Eureka program to develop the technology, as well as a grant from the Ness Fund for business development in the Negev. 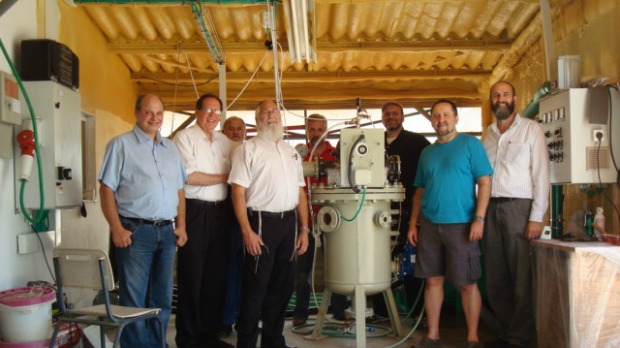 Farb is optimistic that thousands of potential installation sites in Israel could start adding several more megawatts of power to the seriously overtaxed electricity grid by next summer.

A smaller version of the Benkatina turbine could provide off-grid electricity in remote areas of the world in need of moderate amounts of power, as long as there are nearby water pipes. This would be more consistently reliable than either solar or wind energy, says Farb.

And if a proposed Dead Sea canal ever gets built, the Leviathan technology could play a role.

“I can foresee desalinated water coming from the Gulf of Eilat or from the Mediterranean to the Dead Sea through pipes, and taking off some of the extra pressure in many points along the way to use for hydroelectricity,” Farb says.

The device is groundbreaking, according to Farb, because it is radically different from the way hydroelectric power has been accomplished for the last two centuries.

“In the past, they used a dam, used up all the pressure, worked in an environment of stable flow, and used turbines that could be exposed to the air. In-pipe conditions are different, so there is no dam, which makes it more ecologically viable. Only the excess pressure is used so the integrity of the piping system can be maintained, the flow is variable, and it functions in a difficult, closed system environment with splashing water.”

The turbine would only be installed in parts of the piping known to have extra pressure. “We don’t want you to turn on the tap and have nothing come out,” Farb says.

He’s a firm believer in the need for a mix of wind, wave, water and solar energy alternatives.

“We’re in an energy crisis that will last at least 100 years and we have to provide solutions in more than just one area,” he says. “Leviathan has provided a series of solutions that, when fully implemented with the right financial and bureaucratic support, can make a serious difference in the world we live in.”

UNCOVER ISRAEL - Get the ISRAEL21c
Weekly Edition free by email
Sign Up Now!
Bring Israel's story to life.
Millions of people around the world rely on us to gain a deeper understanding of Israel. We are the trusted source for original content you won't find anywhere else.
You can make a difference. Donate today to support journalism that brings Israel’s story alive.
SUPPORT ISRAEL21c
Read more on:   hydroelectricity, Wind Tulip, Environment, Jerusalem, Energy, Clean tech