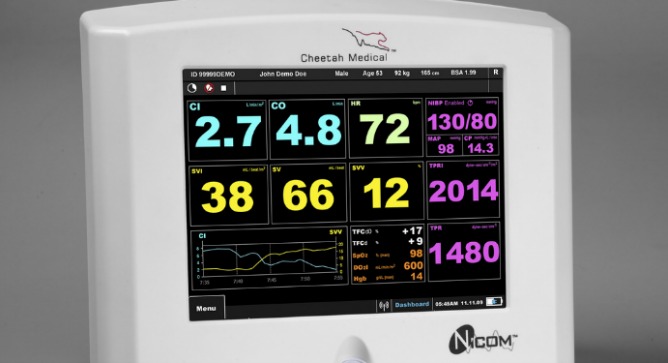 A nurse can easily hook up this NICOM monitor by sticking leads on a patient's skin.

“Sepsis is a huge issue — one of the top killers, often as a complication of pneumonia or urinary tract infection and at times due to an infection acquired in the hospital,” says Dr. Yoav Avidor, CEO of Tel Aviv-based Cheetah Medical. “It progresses rapidly and is difficult to treat. In advanced sepsis, all the body’s organs start to fail. Septic shock sets in and the mortality rate is about 40 percent.”

Doctors can reduce mortality up to 40 percent by treating each case of sepsis right away with exactly the amount of intravenous fluids needed to correct imbalances of oxygen and other nutrients being delivered to the organs through the bloodstream.

“The physician must stabilize the hemodynamic system so that all the organs get exactly what they need — not too much and not too little,” explains Avidor, a urologist by training.

But until Cheetah’s NICOM device came along, the only way to determine the right amount was through an expensive and invasive procedure that can itself cause infection. Since doctors prefer not to do this, a better way was clearly needed.

As soon as NICOM’s uniquely non-invasive system received FDA and CE Mark approval four years ago, it was bought by hundreds of hospitals in the United States, United Kingdom, Italy, South Korea, Israel and France for ICU and anesthesia units. Just by sticking four sensors to the skin on the patient’s chest or back, the staff can continuously collect all the data needed to determine how much fluid to administer.

Now, trials at a dozen US hospital emergency departments are testing the assumption that using NICOM earlier would keep more patients from the ICU. This would save both lives and money, since one in four hospital deaths is caused by sepsis, and it’s the reason for about half of the admissions to medical ICUs.

The only system hospitals buy

Several other medical device companies in the 1980s and 1990s offered non-invasive ways to monitor hemodynamics, yet none worked well enough to be adopted widely. “NICOM is the first advance since then. Practically, it’s the only non-invasive system that hospitals actually buy and use on the really sick patients,” Avidor tells ISRAEL21c.

The genius behind the invention is Hanan Keren, a Weizmann Institute of Science physicist who helped commercialize MRI technology at the Israeli company Elscint. The device is made in Israel and marketed through Cheetah’s US headquarters in Vancouver, Washington.

“In medical devices, the big competitive advantage is the interface between technology and clinical need, and bringing the product to market with a business model that works,” says Avidor. “Many Israeli companies have exciting technology but few have experience with market interface, so they either try to sell the company or go in another direction.”

“NICOM provides an effective method of optimizing fluid treatment in the emergency department, a vital step in the management of sepsis,” says Avidor.

In 12 leading US hospital emergency departments for the next year or two, half of the sepsis patients will randomly get the standard of care (no hemodynamic monitoring), while the other half get the protocol based on NICOM. The Israeli system will help determine whether the patient can handle the large amounts of fluids that can prevent progression of sepsis. If not, extra fluids would dangerously overwhelm the heart the way a car engine gets flooded.

Avidor expects that COMMIT will show a reduction in deterioration of sepsis; the number of admissions to the ICU; intubations; and kidney and liver failure that are common complications of sepsis.

“In general, I hope to see significant reductions in the cost of treatment for these patients, as well as mortality and complications,” he says.

UNCOVER ISRAEL - Get the ISRAEL21c
Weekly Edition free by email
Sign Up Now!
Bring Israel's story to life.
Millions of people around the world rely on us to gain a deeper understanding of Israel. We are the trusted source for original content you won't find anywhere else.
You can make a difference. Donate today to support journalism that brings Israel’s story alive.
SUPPORT ISRAEL21c
Read more on:   blood disease, urology, Cheetah Medical, monitoring, Hospitals, sepsis, Medical devices, Health