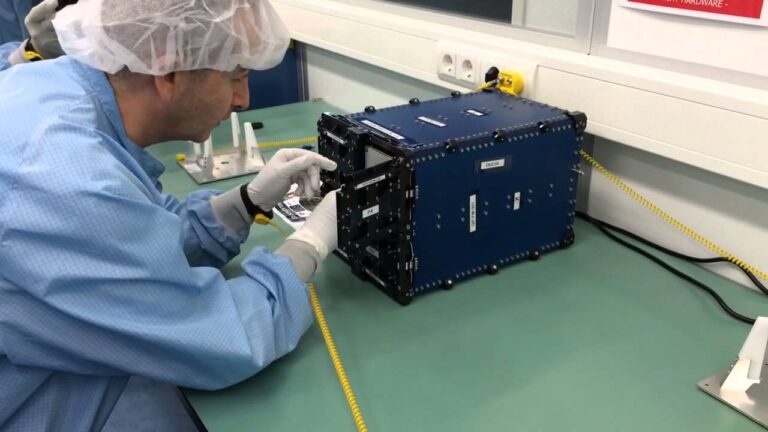 Israeli high school students made history last night with the successful launch of the Duchifat 1 nano-satellite, which they developed and built as part of an educational project. The secondary school students at the Space Laboratory of the Herzliya Science Center, with help from the Israeli Space Agency in the Ministry of Science, launched the 840-gram satellite from the Yasny launch base in Russia at 22:10 on June 19.

The Duchifat 1, which is solar powered, was attached to a 34-ton rocket during launch. The goal is for the satellite to remain in orbit for 20 years. It is the first Israeli spacecraft of its kind to orbit earth. 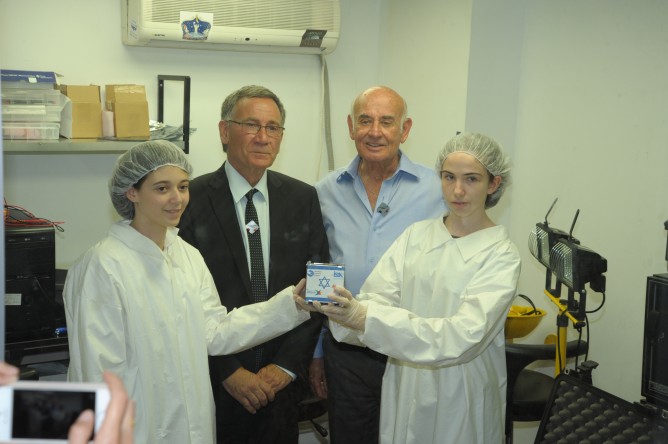 Minister of Science, Technology and Space Yaakov Peri, Herzliya Mayor Moshe Fadlon, and two Herzliya students show a model of the satellite. (Avshalom Shoshani)
“The main mission of the satellite is to transmit real-time information via radio amateur packets from a Low Earth Orbit (LEO) using the Automatic Position Reporting System (APRS) protocol. Duchifat-1 will allow remote traveler’s to access the satellite for worldwide position/status reporting and messaging even in the case of using simple handheld or mobile radios with Omni-directional whip antennas. Distant travelers, boats at sea, and stations in many parts of the world are presently unable to use the APRS system when on distant trips,” reads the Duchifat 1 mission statement.

“The launch today marks the beginning of the nano-satellite era in Israel,” Minister of Science, Technology and Space Yaakov Peri said in a statement.

“The project is part of the great technological advances in space research, a field which once was exclusive only to big corporations and governments. There is now accessibility for satellite research and space technology for institutes and universities as well.”

UNCOVER ISRAEL - Get the ISRAEL21c
Weekly Edition free by email
Sign Up Now!
Bring Israel's story to life.
Millions of people around the world rely on us to gain a deeper understanding of Israel. We are the trusted source for original content you won't find anywhere else.
You can make a difference. Donate today to support journalism that brings Israel’s story alive.
SUPPORT ISRAEL21c
Read more on:   News, Space