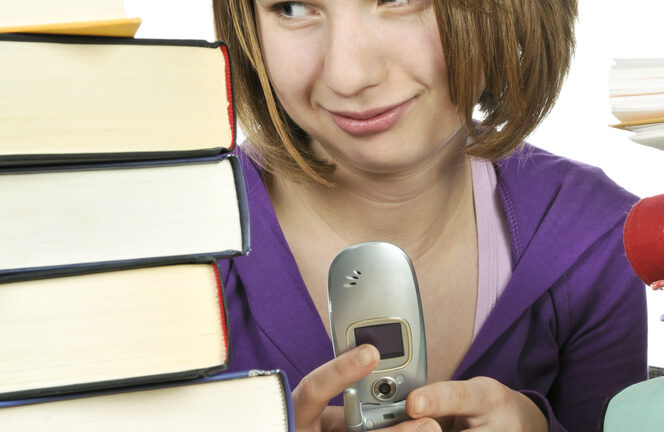 Texting in the classroom. (Shutterstock.com)

After being ranked as the top users of social media in the world, it shouldn’t come as a surprise that a whopping 94 percent of Israeli high school students access social media via their cell phones during class.

Texting in the classroom. (Shutterstock.com)
A new study by the University of Haifa found that students use their mobile phones in class to surf the Internet and access social media, to listen to music, take photos, play games, and send text messages and photos. Based on the findings, there is almost no moment during any class when some pupil isn’t using their cell phone.

Although the vast majority of high school students in Israel have cell phones, the extent of their use has never been examined in depth. This new study sought to determine the scope of use, types of use, when they are used (in which classes), and whether there was a correlation between cell phone use in class and the type of discipline the teacher imposes in the classroom.

The worrying results showed 94% of the pupils admitted to accessing social media or file-sharing sites (such as Facebook and YouTube) during class, from time to time or even more frequently. Some 95% of the pupils take pictures or make recordings during class for non-study purposes; 94% send e-mails and text messages; 93% listen to music during class and 91% actually talk on their phones during class.

The researchers found that in classes with more permissive teachers, cell phone use was lower than in classes where the teacher imposed strict discipline.
The study included 591 pupils in grades 9-12 and 144 teachers of various subjects in three Jewish high schools.

“The research data shows that the use of cell phones during class has become routine,” the researchers said. “Even if on an individual level such use is only occasional, in the standard learning unit — a class of 30 to 40 pupils — in nearly every class a majority of pupils are using their mobile phones in some fashion. At any given moment, at least some of the pupils are using their cell phones, and there is no teacher who hasn’t been forced to cope with the phenomenon of cell phone use on a regular basis.”

Photo of girl in classroom by Shutterstock

UNCOVER ISRAEL - Get the ISRAEL21c
Weekly Edition free by email
Sign Up Now!
Bring Israel's story to life.
Millions of people around the world rely on us to gain a deeper understanding of Israel. We are the trusted source for original content you won't find anywhere else.
You can make a difference. Donate today to support journalism that brings Israel’s story alive.
SUPPORT ISRAEL21c
Read more on:   News, Facebook, social media, University of Haifa, Israeli, cellphone, cell phone