When you think of Israeli high-tech, you may picture hands on a keyboard. Shift your gaze way down to the feet, and follow ISRAEL21c on an exploration of two new shoe technologies invented to keep people walking with less danger of falling.

B-Shoe Technologies addresses the grim statistic that every year, one out of three people aged 65 and older takes a spill in the United States alone. Closer to age 80, the risk affects nearly everybody, and these falls often result in hospitalization and decreased life expectancy. Related healthcare costs are estimated in the billions.

For biomechanical engineer Yonatan Manor, these epidemic-like stats hit home as his father aged and began to fall frequently. Observing how elderly people walk and stand, he theorized that the biomechanics of stability – just like vision and hearing – deteriorate with age. The muscles and reflexes cannot manage the little unconscious adjustments to maintain optimal center of pressure in the heel area. The correcting step backward comes too late, in the wrong direction or not at all.

Confirming his theory with physiotherapists and doctors, and through studies at Ben-Gurion University’s Center for Multidisciplinary Research in Aging, Manor and electronic engineer partners Abraham Stamper and Aharon Shapiro dug the heel out of a sneaker and installed a sensor-driven motorized mechanism that can drive the shoe backward in a controlled and gentle manner to prevent falling.

Six years ago, B-Shoe began developing this prototype with support from the Office of the Chief Scientist, and continued in a Haifa startup incubator.

“We built prototypes of shoes that can save lives,” Stamper tells ISRAEL21c. Three pairs of B-Shoes being tested in gait laboratories of leading Israeli hospitals have an internal processor and real-time clock that collects user data to share with the doctor.

“The main electronic mechanism is in the heel, and the rechargeable battery will be embedded in the sole along with the pressure sensors,” Stamper explains.

“The sensors can detect that the center of pressure is going beyond the back line of support. If there is no reaction from the wearer for more than a few milliseconds, the shoes begin moving backwards five to seven centimeters until stability is regained. People who tried it said they felt it’s improving their balance and it’s not a scary movement.”

After winning US and Israeli patents, B-Shoe launched a crowdfunding campaign to get the product into mass production.

With sufficient investment to complete the regulation process, miniaturize the entire mechanism and start mass production, B-Shoe could be on the market in two years. Stamper is already in contact with the US Food and Drug Administration, and is seeking a strategic marketing partner. 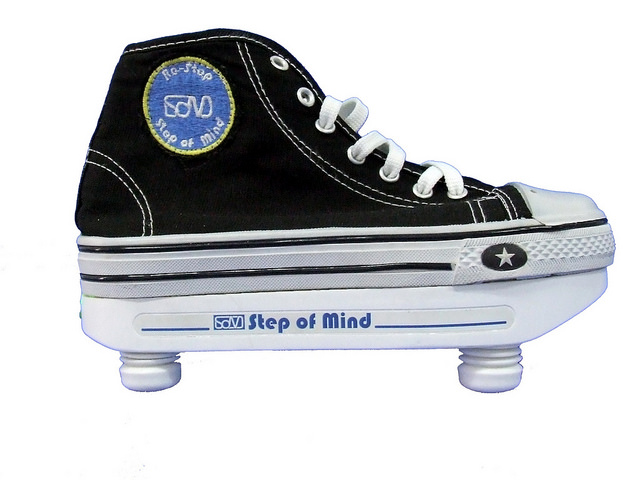 Re-Step shoes look like high-top sneakers, with a difference on the bottom.

Founded in 2006, Step of Mind introduced Re-Step to rehab staff at Tel Aviv’s Reuth Medical Center and at several clinics in Turkey. The system already is sold in the two countries, and negotiations are in progress with France and the United States.

“Traumatic brain injury is not confined to one area,” Bar-Haim explains. “It starts a link of damages that continues for many years. We think that improving walking and balance is the key to stopping that process. One way to do that is to alter the environment so that the person has to problem-solve and walk in an unexpected environment, which challenges the brain’s areas in balance and navigation. This can cause changes in areas of the brain responsible for walking.”

Step of Mind has completed clinical studies involving CP and stroke patients in the Middle East and Europe, and now is starting a major functional MRI study to see if using Re-Step really does stop deterioration.

The shoes are priced so that individuals can buy a pair to use at home after they’ve been trained at a rehabilitation facility.

Along with her partners, CEO Jacob Witkowsky and CTO Mark Belokopytov, Bar-Haim is seeking an investment. Until now, the company has been running on self-funding and grants.

For more information on these technologies, see www.b-shoe.com and www.stepofmind.com.