Like the probiotics we ingest to promote good gut health, Better Air’s BioZone system uses a similar good bacteria to keep out the unwanted bacteria and related allergens that can cause sickness, infection and foul odor in homes, offices, hospitals – and even on bodies.

Better Air co-founder Yuli Horesh became interested in the field of bacteria, when his grandmother died as a result of a rare hospital-borne bacterial infection. Horesh was determined to do something about the rising incidence of fatal hospital-acquired infections, and the effects of sick buildings. The technology he adopted, based on research at Ghent University in Belgium, can be a paradigm shifter.

Instead of trying to kill all bacteria – a losing and even counterproductive battle – BioZone promote good bacteria in indoor spaces, leaving no room for the bad ones to grow and flourish.

“We took the concept of using probiotics to take over a space and applied it to one of the major problems today: sick building syndrome. People are sitting in buildings with mixed bacteria where all the mechanized systems are bringing the outside in, and mixing it with humidity and dirt. What we get basically is a laboratory growing inside the air-conditioning ducts,” Horesh tells ISRAEL21c. 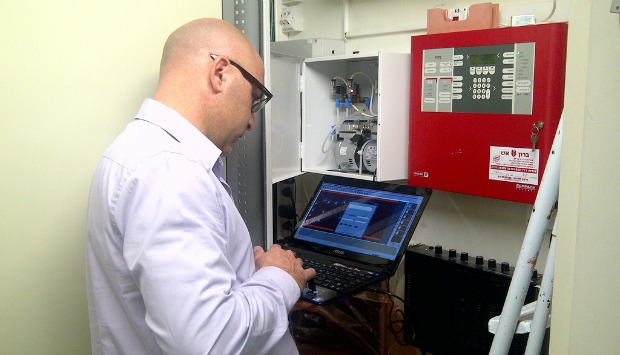 “For the past four years we’ve been testing various combinations and applications and came up with the best technology that actually takes over the microbiological growth in the ducts and defines the area [in a new way],” he explains.

Better Air is working in two directions to promote its technology. One is customized solutions for hospitals and large office buildings. BioZone is already installed in Israeli hospitals and in the Dizengoff Center mall in Tel Aviv. The company is helping to rehab a notorious “sick” building in Jerusalem previously occupied by the Israel Broadcasting Authority. Better Air has also signed on with partners to open subsidiaries in various countries.

In another direction, the company is building small home-based plug-and-play purifiers that sit near the air intake of heating or air-conditioning systems. These units should be available for sale by the end of the year.

BioZone works with food-grade probiotics purchased from the United States, suspended in a gas so they can be dispersed in areas where unhealthful bacteria are growing. The system must be replenished every month to six months, depending on usage and the size of the building.

Horesh explains, “Our trick is this: Bacteria have a language called ‘quorum sensing.’ This means in a certain amount of space, let’s say ‘x,’ there will always be a ‘y’ amount of bacteria — never more.” BioZone quantifies the area and disperses exactly the right amount of probiotics necessary.

In essence, the good bacteria forces out the bad. And the loss of negative bacteria also indirectly puts a lid on the growth of mites and other house-borne pathogens such as mold.

Horesh says that BioZone also helps banish body odor in enclosed spaces, because the odor is caused by bad bacteria.

Better Air, based in Tel Aviv, employs 14 people. The company was founded in 2011 by Horesh, Mike Hoffman and Shai Kutner with about $2 million in private funding, and is seeking an investment of up to $5 million.