A Formula racecar designed and built by Israeli college students took 11th place overall out of 50 teams at an international event on September 14-17 in Italy.

It was only the second time that Israeli mechanical engineering students at Ben-Gurion University of the Negev took part in Formula SAE (Society of Automotive Engineers), a four-day annual competition at the Riccardo Paletti Circuit in Varano de’ Melegari that challenges undergraduate and graduate students to conceive, design, fabricate and compete with one-seater Formula-style autocross racecars.

“We’re talking about teams that have been competing in this tournament more than 15 years, so having our second car achieve spectacular results like that is amazing,” he says.

Not that he was altogether surprised. “For the past year I’ve seen the way our team of 25 people has worked together,” he adds. “That’s what made it possible.”

For the first time this year, the Ben-Gurion University students paired with engineering and design students from Jerusalem’s Bezalel Academy of Arts and Design Jerusalem. This was critical to the car’s evaluation for general appearance, one of four judging categories (the others are performance, engineering excellence and innovation).

“The most difficult part in the process is the very short timetable, because we had to build our car from scratch in nine months, from design to testing,” explains Levitan. “Bezalel gave us a wonderful opportunity to have a car that was designed properly, and in my opinion our car was one of the best-looking cars in the competition. That wouldn’t have happened without Bezalel.” 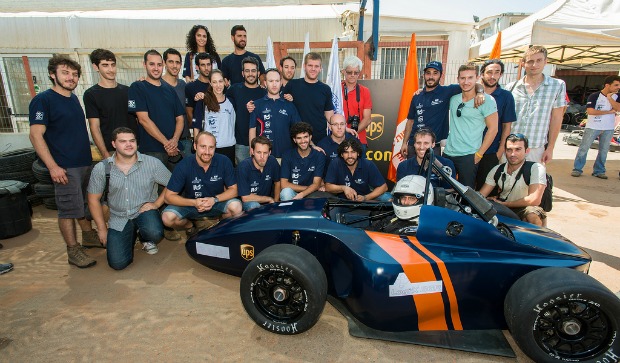 Proud teammates with their Formula racer. Photo by Dani Machlis

He emphasizes that many of the other teams do not have to start from square one every year, as they can simply modify their previous entries. “Our car last year was a rough prototype, and almost every part of the assembly had to be optimized,” he says.

Designing and developing the Israeli racecar was a combination of ingenuity among the teams from the two academic institutions.

“We employed all the aerodynamic knowledge and research that was provided to us by the Ben-Gurion team,” said Bezalel’s Dori Regev, a senior lecturer in the industrial design department, which developed a car design course especially for this project.

“The challenge was to use our abilities and talents as designers and to make them fit in with the needs of the engineers,” she said.

The car was shipped to Italy by UPS, one of the project’s main sponsors along with Logi-X and the Run-Up Group, Objet, Pilco Engineering, ITS Engineering and Michael and Joan Rahav.

Starting the new year with a bang

Since the final day of Formula SAE coincided with the first day of the Jewish New Year, Rosh Hashanah, the teammates felt that their achievement was a great way to start off the new year, says Levitan, who was one of four drivers during the competition.

“Instead of Rosh Hashanah with our families at home, we were with our family of teammates, and it was really good,” says Levitan.

The 25 students celebrated the holiday in Italy together with Tamir Plachinsky, the student who got the project off the ground last year and drove the BG Racing car to a 15th place finish among 57 teams, getting an additional nod as the best new entry. As a result of that showing, Plachinsky won a six-month R&D training internship with the main sponsor of the competition, Dallara, one of the world’s leading racecar makers.

As for Levitan, he is taking a weeklong vacation in Italy before heading back to help a new team at the university get started with next year’s racecar.

“I hope to make it to the top seven next year,” he tells ISRAEL21c. “I have no doubt that we will take big steps — the Israeli culture doesn’t allow us to think small.”

Transmission connected via chain to the rear axle