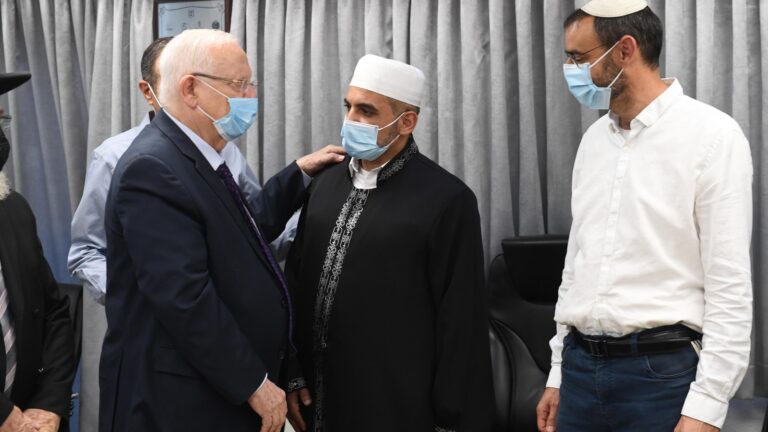 President Reuven Rivlin with clergy in Akko, May 14, 2021. Photo by Mark Neyman/GPO

Amid spiraling violence throughout mixed Jewish and Arab neighborhoods in Israel, President Reuven Rivlin met with the local leadership from all sectors of society in Acre (Akko) on Friday, May 14.

At the meeting, led by Mayor Shimon Lankri, the clergy members made a joint call to end violence and calm the situation in this northern coast city.

They told the president about their shared existence in Akko and about the challenges of the last week.

“The fabric of life that we have created in Akko is unique. The rabbi of the city and the sheikhs have created special and important partnerships here,” Lankri said. “That is why Akko has flourished like nowhere else. Something dreadful has happened here – nationalism, criminality, economic terrorism. We could not have predicted that something like that would happen here, and I am sure that we can overcome it far more quickly than in other places.”

Yashar mentioned Elad Barzilai, a local Jewish educator severely injured after being attacked by a mob. “We had three awful days here, and we are still traumatized,” he said.

At the same time, he added, “Our town is a special place where we live shared lives and can see the results. As the mayor said, there is a problem with criminality, but we will not allow it to affect the shared existence in the town. We are sure that with God’s help, we can get things back to normal as soon as possible.”

This sentiment was echoed by Abu Zarhar. “We will bring calm back to Akko. The people here have worked very hard, invested a great deal in stopping the violence. As the rabbi said, Akko is a place where you feel the calm and the coexistence.”

Salim Najmi, one of the heads of the Waqf Muslim foundation in Akko, thanked Lankri, “who does amazing things here,” and stated that many of the violent events in Akko “are more because of criminals than because of locals. All the people here are working around the clock.”

Najmi added, “We cannot forget that we believe in the same God. All of us are children of Abraham. We must look, with all the problems, at the half-full cup.”

Getz said he has lived a life of shared existence with the Arab population for all his 46 years. His apartment building has six Jewish families and 20 Arab families.

“I don’t go to sleep without the muezzin’s call,” Getz said. “My grandfather was rabbi of the Western Wall and was welcomed by every sensible Jerusalemite.”

The past week’s events, he said, were among the hardest he can remember since coming to Akko.

“If we allow every external force to rock the boat, we may as well shut up shop. We have to hold onto the wheel. If we don’t steady the ship, take responsibility, Akko will become a disappointment, not a success. We all have something to lose. Violence cannot be an option, not ever, not for anything.”

Rivlin emphasized that Israel is “home to us all, and we protect our home. Not with clubs and knives, not with stones and firearms that sow destruction and ruin, but first and foremost by maintaining law and order, which are the most basic guarantors of personal safety, for life.

“This truth is what gives not only us strength, but also a large part of the population, the moderate majority that lives in the State of Israel. We must not allow extremists and fomenters of unrest to set the tone. We must not let them lead us to despair and despondency. We must enforce law and order on the streets aggressively and without compromise, and at the same time remind ourselves that we have been living here together for a long time.”

Rivlin said that restoring confidence between ethnic groups “will require deep and comprehensive work, that many of us are already part of in education, public information, enforcement, investing resources and narrowing the gaps between us. But at this difficult time, we must focus our efforts right now on calming the ill winds that are on our streets.”

He said that public leaders and particularly spiritual leaders are responsible for what happens in their communities and for restoring law and order.

“Being here today is a sign of your commitment to that mission, the existential task of Israeli society as a whole, and of mixed towns in particular. I stand with you in this crucial task,” Rivlin concluded.