Family circumstance and curiosity led boutique perfumer Ayala Moriel from the city of Tel Aviv to the other end of the world on the west coast of Canada. After landing in Vancouver in her early 20s, her sense for Middle Eastern scents helped her create a unique line of natural perfumes for women and men.

Now 36, and considering a move back to Israel, Moriel mainly relies on electronic communication to help her develop custom-made scents from exotic ingredients that evoke the Arab market in the Old City of Jerusalem, or the verdant valleys that lead to the Mediterranean Sea from Israel’s Galilee. A consultation with her artisanal perfume house can start with an online questionnaire, and even a phone interview or personal meeting in Vancouver.

Moriel has also created about 50 signature scents with names like Zohar, Sahlab and Finjan, and is working with companies to help create a commercial line of fragrances to be repackaged under other brands for products such as natural cleaning supplies.

Moriel’s perfumes do not contain synthetic musk or odor-enhancing chemicals.

Though aware of the allergenic or toxic effects of synthetic perfumes, Moriel stays out of the politics of this debate in the perfume industry by saying that she works with only natural substances for aesthetic reasons: Natural perfumes have hues and layers much more resonant and complex than synthetic big-name brands at airport duty-free shops and American department stores, she says.

Living between the juxtaposed cultures of Jewish hippies, Druze villagers and Arab farmers helped define Moriel as the exotic, all-natural perfumer she is today.

Born in 1976 in Montreal, at the age of three she immigrated to Israel with her mother and stepfather. They helped found the alternative ecological village Klil, in Israel’s north. 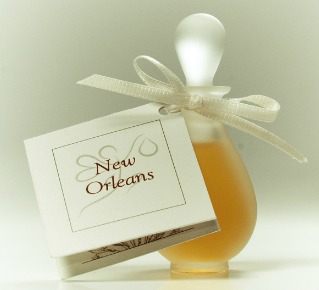 Moriel’s products are favored by established, over-30 women.

“It was like heaven for a little girl because we had so much freedom and loved the nature and flowers around us,” she tells ISRAEL21c. For a few years, her family lived without electricity.

In her early 20s, she and her husband and baby went to look for new opportunities –– and Moriel’s birth father –– back in Canada. It would prove to be a difficult period in her life.

After a separation that left her alone with her autistic daughter in Vancouver, Moriel turned to burning incense to help her relieve stress and anxiety.

Enjoying it so much, Moriel decided to try making her own incense, but it did not live up to her expectations, smelling like a lit marijuana cigarette. Why not create scents that don’t need to be burned, she reasoned? Her unique brand, Ayala Moriel Parfums, was hatched. That was about 10 years ago.

With orange blossoms as compass

Always looking to her Middle Eastern home for inspiration, this year she returns directly to her Jewish roots by launching a new perfume called Etrog, which distills the hauntingly sweet smell of the citron, an aromatic citrus fruit used as a symbol in the fall Jewish holiday of Succoth. 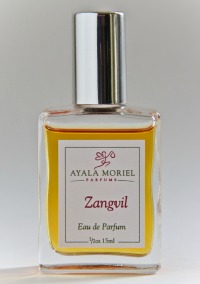 Zangvil is one of her signature scents.

Before committing to a large order of Etrog, or any other scent for that matter, for about $50 Moriel will send a broad sample of scents in the mail –– each bottle containing at least a week’s worth of perfume. Customers can then work with Moriel to choose the right scent.

With winter coming, her perfumes offer an exotic pick-me-up, she says. The definitive lack of scents in chilly Canada pushes Moriel to keep surrounding herself with rich aromas formed in her early memories. She says that the warm, humid climate in Israel contains more fragrances than colder countries, and besides coming to see her growing family in Israel every year she is drawn to the odors.

“I am sensitive to the smells in Vancouver now and can pick up the cherry and linden blossoms. But it’s really the Middle Eastern heat that brings out the best in plants and flowers,” she says.

“And in the spring … there are orange blossoms in full bloom. I try to time my trips back to Israel around this time.”