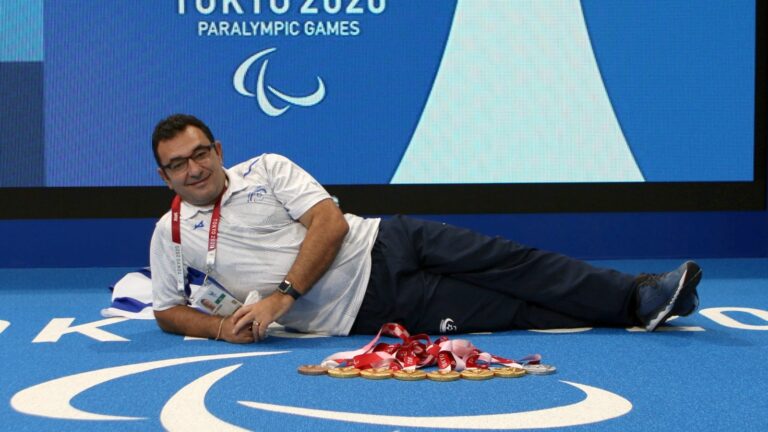 Paralympic swimming coach Yaacov Beininson from Ilan Rehabilitation and Sports Center in Haifa with the eight medals won by his protégés in the Tokyo Paralympics. Photo Keren Isaacson/Israel Paralympic Committee

Israel’s Paralympic team earned six gold medals, two silvers and one bronze from the Tokyo Paralympics that ended September 5. Eight of those nine medals were won in swimming.

In the process, the Israelis set some new records in this Olympic competition for people with physical disabilities.

Mark Malyar, 21, earned a gold medal in the men’s 200-meter individual medley, a gold in the men’s 400m freestyle and a bronze in the men’s 100m backstroke. He set new records for his disability category in the 200m and 400m events.

Ami Dadaon, 20, won a gold medal in the 200m freestyle, a gold in the men’s 50m freestyle and a silver in the 150m individual medley. He set records in the 200m and 50m events in his disability category.

The ninth medal for Team Israel was a silver earned by Moran Samuel, 39, in the women’s single 2,000-meter event. She trains with coach Paula Grizetti at the Daniel Rowing Center in Tel Aviv.

Israel has participated in the Paralympic Games since the first competition in 1960. The first delegation won two silver medals and two bronze medals, in swimming, table tennis and wheelchair basketball.

Israeli Paralympic athletes have earned 129 gold, 125 silver and 130 bronze medals in the history of the Games, which traditionally are held two weeks after the Olympic Games at the same venue.

In the 2016 Rio Paralympics, the tally was three bronze medals, won by Moran Samuel in rowing, Doron Shaziri in shooting and Inbal Pezaro in swimming.

UNCOVER ISRAEL - Get the ISRAEL21c
Weekly Edition free by email
Sign Up Now!
Bring Israel's story to life.
Millions of people around the world rely on us to gain a deeper understanding of Israel. We are the trusted source for original content you won't find anywhere else.
You can make a difference. Donate today to support journalism that brings Israel’s story alive.
SUPPORT ISRAEL21c
Read more on:   News, Sports, israeli athletes, Paralympics, Tokyo Olympics